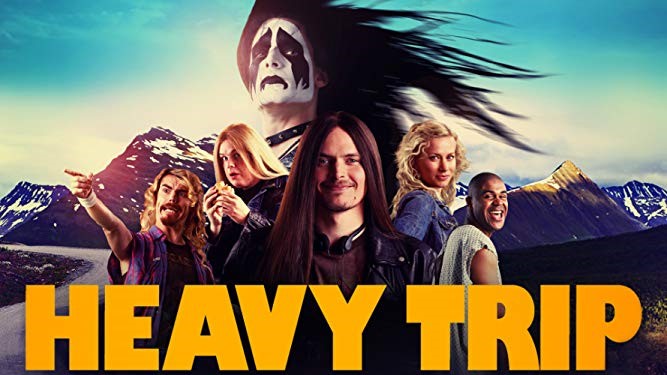 Part send up, part love-letter to those who enjoy the sonic sledgehammer that is heavy metal music, Finnish comedy ‘Heavy Trip’ is the light-hearted story of four friends who, after many years of practise – a dozen to be precise – finally decide to take their act on the road. What follows is an enjoyably daft 90 minutes of laconic humour, slapstick set pieces, deadpan surrealism…and a final scene featuring a crowd surfing cadaver.

A four-piece metal band – later to be christened Impaled Rektum – have been hiding away in the shadows and practising at the slaughterhouse of guitarist Lotvonen’s parents. Shy, long-haired vocalist Turo (Johannes Holopainen) bears the taunts of “homo” from local ne’er-do-wells and appears to exorcise his torment in an impressive, guttural death growl; Jynkky (Antti Heikkinen), in a nod to Spinal Tap, is an up-for-anything drummer who has already snuffed it on two previous occasions; Pasi (Max Ovaska), a po-faced bassist with encyclopaedic metal knowledge, has a proclivity to dish out Uruguayan Grind Core instead of Justin Bieber records at his library job; Lotvonen (Samuli Jaskio) is a wild but dim guitarist who can expertly shred other band’s riffs and readily indulge in superfluous headbanging.

The band have talent but they’ve only learned how to play cover versions and have never strayed from the slaughterhouse to entertain a crowd, not even in their tranquil Finnish village. However, after two instances of fortune – Lotvonen discovering the band’s new “sound” when he accidently sends a full reindeer carcass through a bandsaw, and a chance visit from the promoter of a renowned Norwegian music festival – potential rock stardom looms on the horizon. They get something of a helping hand when arrogant club singer Jouni (Turo’s lascivious rival in love for the affections of florist Miia) agrees to have the band support him at a local gig. However, the festival dream appears doomed both within Turo’s well-meaning deception and his sturdy projectile of green vomit.

Though there’s an easy predictability to the denouement of the film’s two central plotlines (will the band make it to the festival? Will Turo’s longing for Miia be realised?), there is a lot to be enjoyed along the way. A moment involving the use of a speed camera for a band photograph – and the resulting deadpan confusion as to where one obtains a copy – is nicely done. There are some well executed one liners such as when the suggestion of naming the band ‘Fetal Death’ results in the objection “let’s not get small kids involved in this”; it’s both a great line and perhaps a satirical jab at pro-life “all life begins at the moment of conception” type debate. The main performances – from Holopainen’s likeable sincerity as Turo to Ovaska’s constant and slightly pathos inducing pokerface as Pasi – are well delivered and there’s a palpable chemistry as a piece of ensemble comedy.

Within the film’s opening scene – a humorously laconic portraying of Turo’s case of esprit de l’escalier at the hands of his tormentors – there was perhaps a hint of a style more comedically subtle than what transpires later. The elements of slapstick – such as Turo’s ridiculous scuffle with an obviously fake wolverine – and the growingly conscious attempts at painting surrealist pictures – for instance a “chinese dwarf” and a “circus professional, a clown” previously killing themselves in the tour van – are enjoyable enough. However, it could be argued that the comedy has become a tad too broad by the time a Jesus and his disciples bachelor party are attacked with a bazooka at the Norwegian border.

Heavy Trip is goofy enough to get away with its flaws and it’s an enjoyably daft comedy. At the film’s conclusion, there’s even a finely posed moral lesson – wrapped up in gross out language – regarding art and the conundrum of whether one should at least try to get his/her work out into the world: “It’s better to shit yourself than to be forever constipated.” A film has something about it when it can deliver an epilogue so simultaneously profound and scatological.

Heavy Trip is now available on digital platforms in the UK.