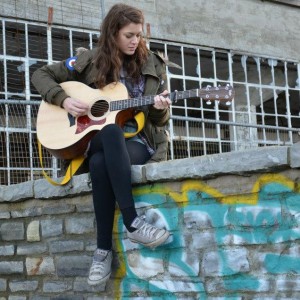 The Fix is dedicated to introducing you to new artists from across the South West, celebrating the great talented upcoming musicians and the more distinguished hidden gems that should be on everyone’s radar. 20 year old singer-songwriter Hollie Trevis wowed us initially when playing at the Strode Live Retrospective last March – and she only played one song! She’s since made the move to London to study but has been keeping her Somerset fans happy by churning out one great tune after another and uploading them to her social media sites alongside some wonderful covers. So without further ado, let’s introduce you…. As we’re introducing you to a hotbed of potential new listeners, how would you describe your music? There’s a bit of a genre clash isn’t there? Yeah, I never know exactly what genre to class myself in! I have songs to make you laugh and also songs that will make you really emotional. There’s a lot of different elements in my music as I have the singer/songwriter mellow vibe as well as some catchy, punchy tunes that will make you want to dance! How did you find your way into playing music? I got into music because of my parents. When I was young there was no 90’s pop played in my house, we always used to listen to old 60’s rock n roll or some awesome 70’s punk! My dad played guitar and I always wanted to give it a go, then my parents took me to my first real ‘proper’ gig when I was about 11 to see Green Day and from then on I knew I wanted to be a musician. Who, if anyone, has inspired you as a musician and why? My taste in music is very wide, so anyone from Alanis Morissette to The Jam to Matt Corby inspires me! There is no particular artist, but I can be listening to anyone and suddenly get inspired whether it’s from a lyric they sing or a guitar riff they play. And you’re currently studying in London, right? How are you finding that? Yes, I study at a University called The Institute of Contemporary Music Performance! It’s amazing I love every minute of it. I’m doing a 3-year songwriting degree; we have to write about 3 songs a week, which means I’m constantly learning new things and getting new ideas. I’ve met some incredible musicians who I now have the privilege of calling my friends. It’s a fantastic place to be and I don’t want it to end! What’s been the highlight of the last six months for you as a musician? Wow! Hard question, but I would say that just moving up to London and being surrounded by an amazing music scene has been my best moment. As I am now playing gigs up here, which to me is incredible, and I am so grateful for every opportunity that I get given. You’re from Wincanton originally and studied Music Performance at Strode College in Street, so when can we see you gigging back in Somerset? I’ll be back down on the 20th April which is Record Store Day, a worldwide event that encourages you to support your local record store. I’ll be performing for an hour outside of Acorn Music in Yeovil along with lots of other talented acts. You should all come down! Which local acts have caught your attention at the moment and are there any more established acts you’d recommend? Local to Somerset I really enjoy Lee Rahn he’s got a great vibe about him and some awesome tunes. Local to London there is a girl called Polly Money. She is INSANE! She is so fantastic and you should all check her out. She studies at my uni too… There’s an Australian guy who Is getting a great name for himself – Matt Corby, He is amazing I had the pleasure of seeing him play live up here in London he absolutely blew me away, best voice I have heard for a long, long time. So, what’s on the horizon for Hollie Trevis? Anything exciting in the pipeline? I am going to be recording my album at the end of March, I am so excited to get some new material up (online) for everyone to hear! I feel that my songs are now a lot more developed and crafted than the ones that are available for you to hear at the moment. It’s really exciting to finally get some new recordings done and I can’t wait for people to hear them. You will be able to find them at: www.facebook.com/hollietrevis if you give the page a like. I had to give myself a cheeky plug! And as recommended by Hollie, here is Lee Rahn performing “Old Lady” at Glastonbury’s fantastic Pop Up Cafe event:
Follow @Thefixmag
Recent Posts
We Like You…