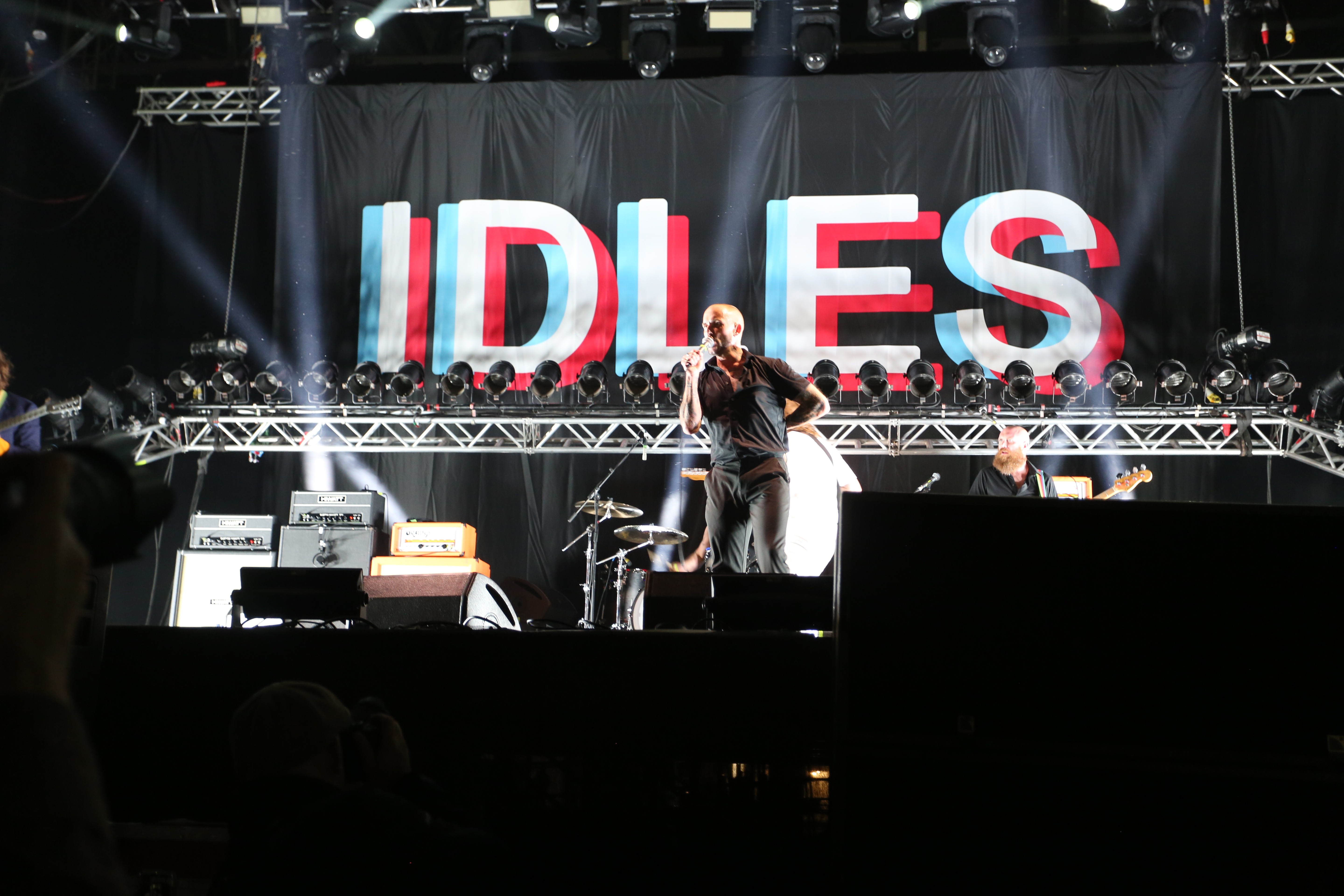 And we’re back. A full 550 days after The Fix covered Halifax indie, space-rock merchants The Orielles at SWX on 2nd March 2020, the recent revival of Bristol’s live music scene – aided by IDLES’ back to back album launch shows at The Louisiana a couple of weeks ago – reached an apt climax with the hometown heroes headlining an afternoon and evening of music across three stages. It’s a beautiful late summer evening and, rather than being huddled shoulder to shoulder in a compact sweatbox such as the Louis, descending upon the Downs with a relatively modest – and slightly pared back – crowd of around 10,000 feels like a safe enough return to post-pandemic gig reviewing.

There’s a fish-out-of-water air of celebration and revelry – seemingly inspired by the mere notion of being out at an actual event rather than the music itself – amongst the crowd, and there’s plenty of signs that folks are still shedding the cobwebs of myriad lockdowns during Paranoid London’s set on the Centre Stage. A gentleman beside me has evidently suffered an amnesia as to what reasonably passes for a dance manoeuvre and instead lunges forward into intermittent calf stretches. Lockdown x 3 appears to equal zero spatial awareness as a bouncing, middle-aged man repeatedly bumps into my +1 for the evening. Someone has dropped a pair of shades; I pick them up and ask the chap next to me if he is the rightful owner and, making it clear that the glasses don’t actually belong to him, he stuffs them in his shirt pocket and happily boogies out of view. At least there’s evidence of a conscientious approach to Covid safety on display; a young fellow is crouched discreetly beside a female pal and is helping her ingest what I can only assume to be a lateral flow swab into her nasal cavity.

Backed by fellow bandmates on twin decks, Paranoid London’s frontman – whether an intentional tribute to the recently departed Dub pioneer or not – is dressed quite a lot like Lee Scratch Perry. He repeatedly sings a one line mantra that is slightly hard to discern, and after discussions that it could be “Bang-la-desh” or “Suff-ra-gettes”, we finally agree on “Suck a dick”. A Suicide Prevention team – a sight hitherto unfamiliar to me at live music events – passes by and someone jokes that they are only working a short shift for the duration of Paranoid London’s set. I have a brief interaction with Tim Oxley-Smith from Crack Magazine and Francophile dance duo Pardon My French; the fact that my being aware of who he is isn’t even close to being reciprocated says a lot about our respective fortunes in the music journo biz. 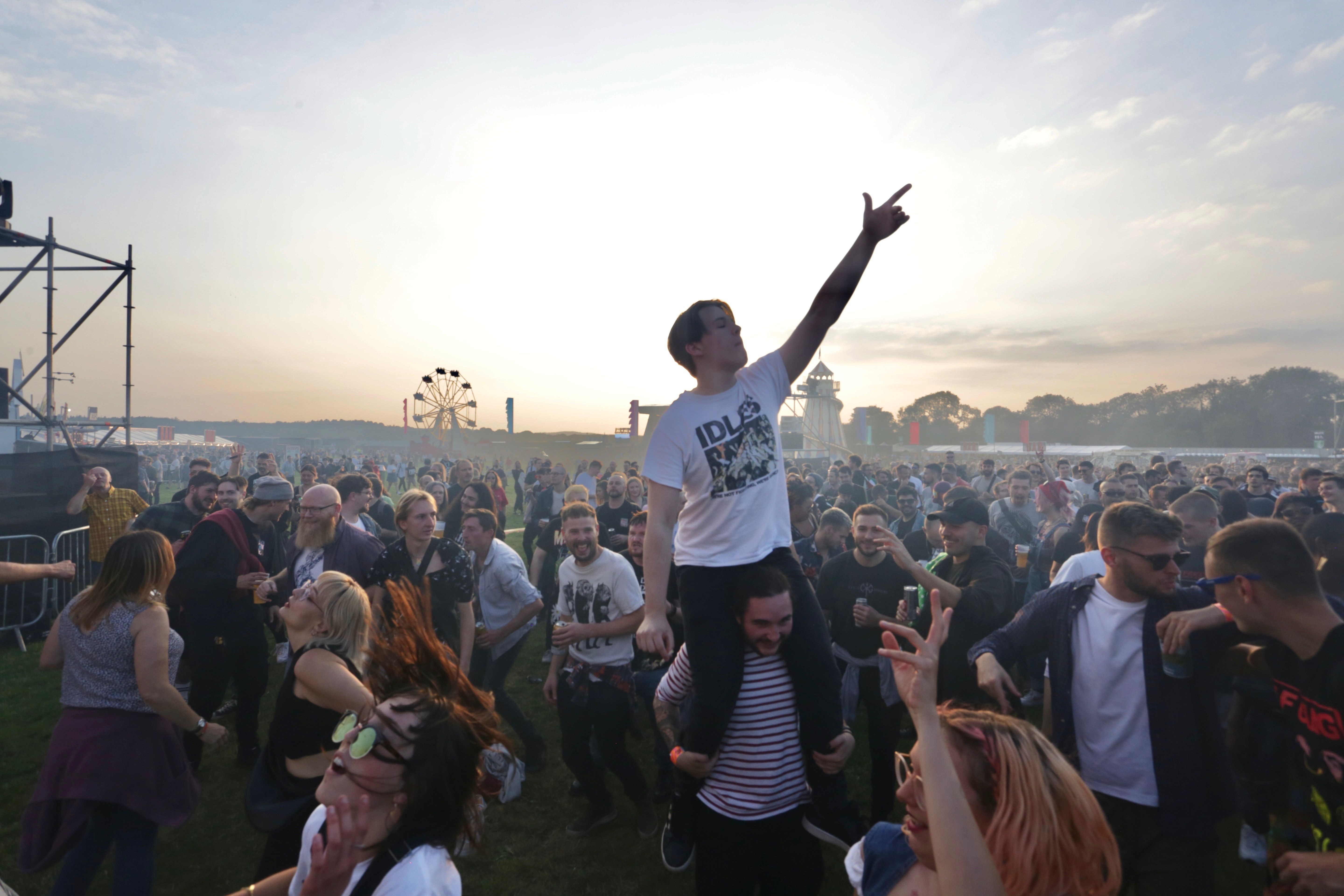 It’s time for IDLES’ headline set – the words ‘Love Saves’ adorned across the top of the main stage seem generally befitting their songs’ fierce calls to compassion – and one quickly notices that singer Joe Talbot is now shorn of his remaining hair and guitarist Mark Bowen, usually partial to the scant stage attire of pants and socks, is clothed in white jeans and T-Shirt. ‘War’ – the opener tonight and of latest album Ultra Mono – is instant evidence of IDLES’ raison d’etre of strident socio-political passions amidst battering ram guitar riffs. “We’re dying for stone-faced lies”, Talbot bellows his ire toward political figures with the power to send young soldiers into the meatgrinder.

While IDLES are sometimes prone to a lack of thematic subtlety in their unapologetically left-wing politics, they occasionally reveal a pleasing wordsmithery in their conjuring of song and album titles. ‘Never Fight a Man with a Perm’, for instance, is a title that works as an amusing image in itself and the name of the album from which it comes – 2018’s Joy As An Act of Resistance – is a similarly deft display of lexical choice; the notion that jubilance is the best remedy and revenge against any forces that oppress us is almost exquisite in its philosophical simplicity. Meanwhile, the visceral refrain and crowd singalong of “Concrete and Leather” during ‘Perm’ is always an arresting live music moment.

Following ‘Mother’ – a raging lament of a working class matriarch having to work “seventeen hours seven days a week” – Talbot attempts to separate part of the crowd and initiate a ‘slam dance’ coming together but, perhaps due to a residual nervousness about coronavirus, there appears to be few takers. Following tune ‘Model Village’ maybe serves as the most salient example of IDLES’ sledgehammer subtlety in matters of political messaging. The lyrics – referencing racism, “homophobes”, and “Gammon” – should really speak for themselves but, pre-song, Talbot feels the need to make the meaning explicit: “This song may be misconstrued as an aggro song about villages. It’s not. It’s a metaphor about England.” 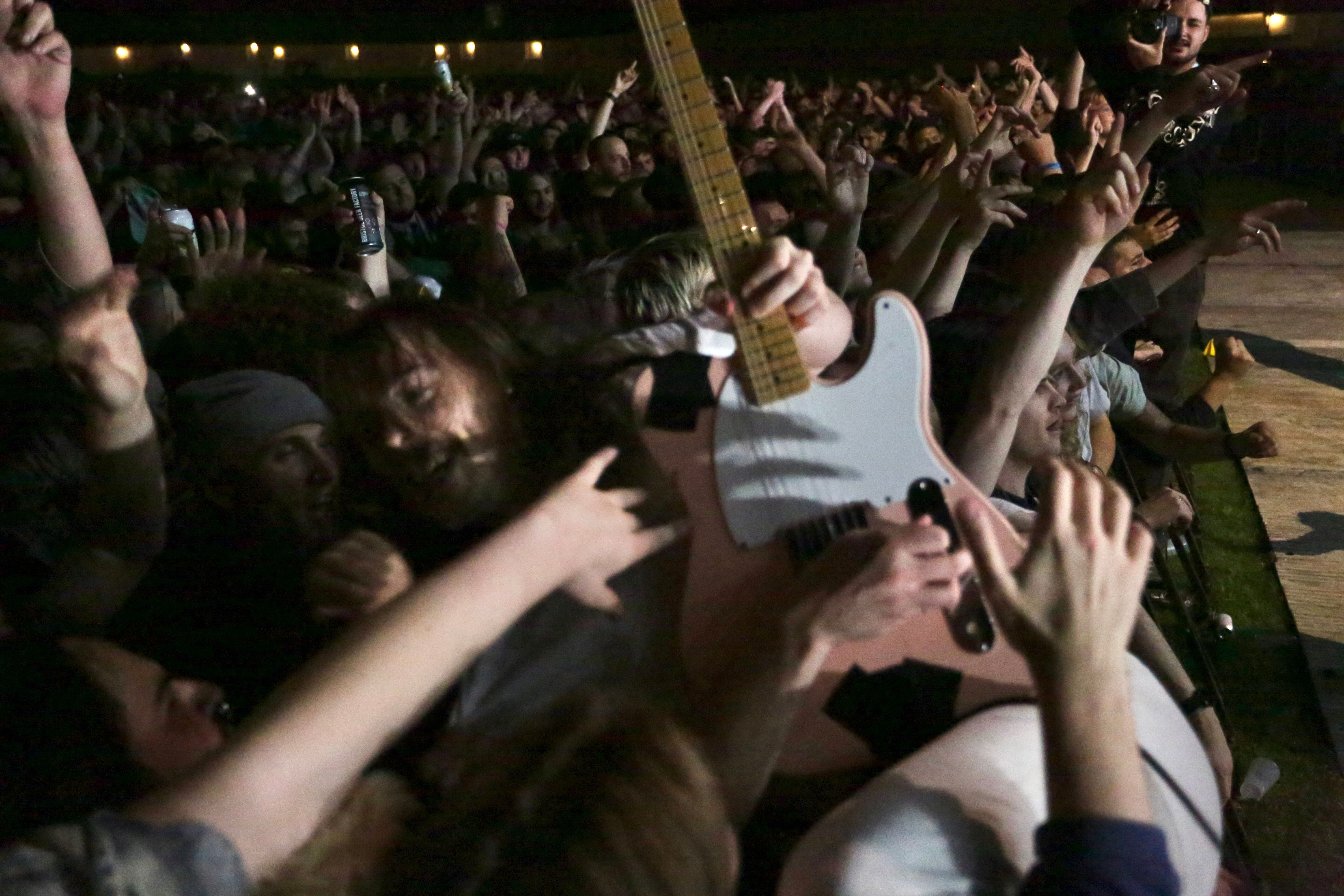 There’s no doubting IDLES’ sincerity though and it’s hard to deny an evident flair for bellowing their version of moral truths – amidst a pummelling salvo of bass, drums and guitars – in such a riveting way that it is hard to disagree with their worldview. With IDLES T-Shirts a pervasive sight on Durdham Downs this evening, there are clearly a healthy number of adamant followers who would go to the trenches for this band and the creed espoused in their work. IDLES’ genuine sense of compassion is further evidenced in the fact that the band allocated 2,000 free tickets to National Health Service workers ahead of tonight’s show. Early in the performance Talbot champions the importance of the NHS and this induces a large cheer from the audience.

Those familiar with IDLES in the live forum won’t be surprised by Talbot’s between song mini-sermons on his anti-monarchist bent (“Are We Royalists? I thought Not”), his mentioning “paying taxes”, and his returning to the subject of the NHS (“This one is for the workers of the NHS”). It feels a little exhausting, a certain case of preaching to the choir (how many people, really, at an IDLES gig in liberal, Tory-adverse Bristol would disagree with the importance of the National Health Service?), but what is perhaps surprising is the band’s late show digression into having fun with other artist’s tunes. Talbot delivers a tongue-in-cheek, acapella blast of ‘Wonderwall’ while Bowen, true to character, dives headlong into the audience. Later, new track ‘Love Song’ segues into a medley including Portishead’s ‘Glory Box’, an unseasonal excerpt of Mariah Carey’s ‘All I Want For Christmas is You’ and The Cranberries’ ‘Linger.’

Time marches on but Talbot defiantly states “We don’t do curfews” and mentions the “posh people” in the residential areas on the perimeter of the Downs. Just when you think that the IDLES frontman has gone a bit too far off the cliff of his leftist ethos, a nicely timed “they can’t help it” keeps things in harmony with the group’s ragged, self-professed compassion. The evening closes with ‘Danke’ – a near cover in itself with its lyrical burrowing from Daniel Johnstone’s ‘True Love Will Find You In The End’ – and it’s time to let the posh folk of Clifton get their heads down. It’s great to be back and it’s fitting that IDLES, as arguably the prominent local heroes of our time, were the ones to take us there.