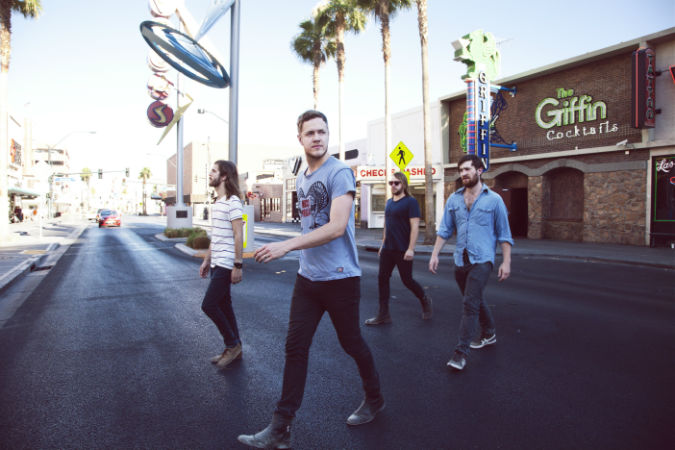 Touring shortly after the release of their debut album ‘Night Visions’ the crowd anticipation is feverish for Imagine Dragons at the O2 Academy Bristol tonight. As I approach the venue, it is teeming with new music fans. The queues tail back around the block in scenes that bring to mind Dylan going electric, only with the friction replaced by adoration.

The band are ready for greatness too. They play before epic strobe lighting and around the stage centrepiece; an enormous bass drum. In fact, the whole stage is drum-heavy and outbreaks of drum rallies are part of a kinetic set that also includes synths, solos and slap bass. The performance is honed to perfection. As they prepare to move into the big leagues of indie rock, their sound does much to justify this. Temper Trap-intros, echoing U2 guitars and The Killers’ balladeering all play a part. But as emblematic as that big West Coast rock sound is it’s tempered by quieter breakdowns; reflective pools of calm before the high-octane stuff kicks back in. Their anthems are already familiar to the crowd and sung word-for-word with delight. They’re stitched together by melodic guitar soundscapes reminiscent of Nick McCabe of The Verve‘s dreamlike siren calls. Singer Dan Reynolds is an engaging and passionate presence. He bounds, Chris Martin-like, around the stage and pounds his drum punishingly. He has a strong voice and it does well hold up as he really puts it to the test. In a set liable to veer off in any number of directions highlights include “Tiptoe” in which catchy chord changes surf over a buzzing bass line before one of those McCabe-inspired breakdowns washes in atop aquatic sounds and Fleet Foxes harmonies. Then, seven songs in, a tentative guitar strum and that dubstep bass signal the introduction to the real heart-stopper, “Radioactive”. It’s greeted with a huge roar and is every inch the tune that topped the Billboard alternative charts earlier this year. By combining club and indie scenes they’ve created a sound for 2013 that can only bolster their claims to reign supreme. And the intent is confirmed lyrically; “I’m waking up, welcome to the new age…”. They pull out the stops for this one, it’s underpinned by keys and cello, gets the biggest of breakdowns and there’s lots more drums of course. Then a pause for suspense and the final chorus; “…I’m radioactive”. Later, a pretty love song called “Underdog” has childlike bleeps and whistles. It adds to the loved-up feel. The warmth from the crowd is reflected by the band. “This is the most energy in a room this size I’ve ever played in”, Reynolds confirms, “it’s like playing a festival”. This witness can only agree. To find out more about Imagine Dragons visit their official website www.imaginedragonsmusic.com For full listings at O2 Academy Bristol please visit www.o2academybristol.co.uk