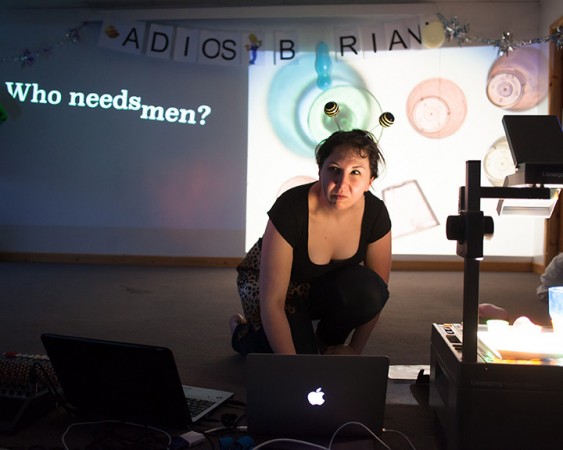 “Poor little woman! She is gaping after love like a carp on a kitchen table.” This quote from ‘Madame Bovary’ appears projected on to one of the stage’s two big screens as the audience await the commencement of tonight’s show; while claiming to have taken inspiration from Flaubert’s novel, the true originality and inventive quirkiness of its presentation make ‘Infinity Pool’ something very different. This is effectively a one woman show, except that writer and performer Bea Roberts doesn’t utter a single word throughout; instead she skirts around the stage manipulating the various machines to uniquely spin her narrative.

The stage bedecked with laptops, OHPs, projectors, audiovisual equipment and a television set, Roberts utilises a host of technological capabilities to bring us up to date in its retelling the story of Emma (Barnicott in this instance, not Bovery) and her desire to find excitement and romance beyond the ennui of her perfunctory married life.

The performance begins with Roberts completely enshrouded in a duvet and perambulating the stage as a screen displays the video to INXS’s ‘Need You Tonight’; with dialogue appearing across the television set, along with her ignoring the ring of an alarm clock, it soon becomes clear that someone is having a naughty, early morning reverie of Michael Hutchence. This scene sets the tone the rest of the show; Emma’s escapism and desire to be delivered from the humdrum is immediately apparent, while her fantasy being spoiled by the incongruous intrusion of Neil Oliver from Coast reveals the show’s healthy slant towards the humorous.

With dialogue appearing in Powerpoint form, (different fonts for different characters) photographs, audio clips and email/internet interactions displayed on the large screen, the story then begins to take shape. We learn that Emma works at a plumbing supplies office in Plymouth and, with her daughter now living it up in Australia, she returns home each night to her husband Paul where the excitement of these evenings culminate in fisherman’s pie, trash TV and pointless Facebook posts. Through witnessing her web surfing habits and reading materials we also learn that Emma’s wishes for a better life make her susceptible to the constant bombardment of fashion and celebrity glamour. A survey in one of her magazines hits on her core dilemma: Is she still with Paul because of “Love, fear or habit?”

When Emma starts interacting with a charming and witty customer via email, the monotony of her life is given an injection of intrigue and optimism. We see their compatible exchanges develop from work to personal email and then on to instant messenger – the projections of their interactions on the big screens feeling oddly intimate when compared to standard dialogue. As the cyber affair progresses, Emma struggles with the online freedom to reinvent herself and whether to leave behind a life of familiar discontent in pursuit of a man she has yet to meet.

What sets ‘Infinity Pool’ apart as a piece of performance are its inventive techniques and an approach to presentation that bristles with ideas. For example, a circular receptacle of water is placed on the OHP and red colouring used to simulate spilling hair dye on a toilet seat. The use of disco lights, music, banners and the social hum of conversation, brilliantly and amusingly portray a leaving do for work colleague Brian; the blurred projection of Emma’s dialogue cleverly depicts her increased levels of drunkenness while the wine and shot glasses placed on top of the OHP allow the audience to gauge her alcohol intake. Furthermore, the technique of projecting dialogue could easily have felt dry were it not for the reliably witty and strongly written exchanges.

The novelty of its methods makes ‘Infinity Pool’ consistently fun and engaging. While a more conventional theatrical work perhaps could best extract the pathos from its theme of seeking romantic deliverance from banal and unfulfilled lives, its true virtue lies in its uniqueness. A genuinely original approach to storytelling.