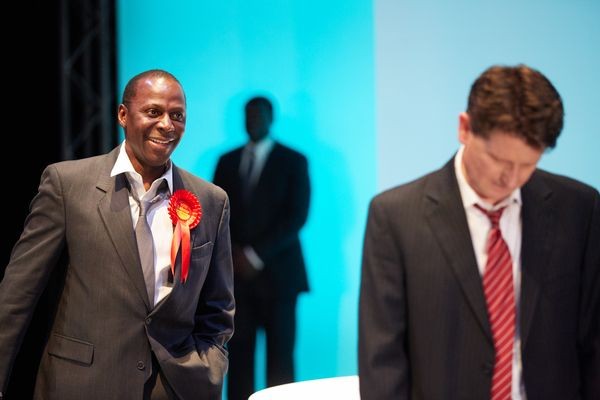 Next week, Bristol Old Vic welcomes Headlong’s revival of David Hare’s blistering 1993 play The Absence of War. Originally the final instalment of a trilogy, the play is based on behind the scenes observations of the unsuccessful General Election campaign of the Labour Party in 1992. George Jones, leader of the party, battles both external and internal demons in the fight for Number 10.

Starring in this revival is Cyril Nri as the leading political advisor to Jones, Oliver Dix. Nri is perhaps most famous for his portrayal of Adam Okaro in The Bill, as Cassius in the groundbreaking all-black adaptation of Julius Caesar and as Lance in Russell T Davies’ recent tour de force Cucumber. Having spent some time at Bristol Old Vic Theatre School in his younger days, this was the perfect opportunity to catch up with him about the play and his work.

The Absence of War centres around party leader George Jones. Can you tell us a little bit about your character Oliver Dix, the leading political adviser to Jones?

Oliver is a mixture of Peter Mandelson, who helped Tony Blair to power, and two fictional characters from the TV series The West Wing: Leo McGarry and Toby Ziegler, as played by the late John Spencer and Richard Schiff.

He’s passionate, driven and very controlled.  His holiday reading is described as “Tsun Zu’s The Art of War, a book of transactional analysis and two biographies of Hitler”. I’d add, a book on Chomsky, another on Game Theory and Machiavelli’s The Prince. That might make him sound right winged, he’s not. He’s passionately left in his politics, but believes in a discipline to get those policies a chance of seeing the light of day. I suppose Malcolm X’s phrase “By Any Means Necessary” would sum it up.

What do you think it is about the current political climate that makes this revival of the play so potent?

The play (when it was written) was prophetic about where the Labour Party would head after their 1992 defeat and the rise of the New Labour project. It was equally prophetic about the pretence that the Tory party made about their “so called” good management of the economy – only to reveal after their win what a dire mess they had actually made of the economy. Our revival is sadly playing in a climate where the same issues (health, economy, tribal lines of rich and poor and personality politics) are being rehashed. Our revival not only gives you a good laugh and the tragedy of the aspirations and consequent fall of a man, but will also leave you questioning our current crop of politicos more closely, before you choose to give, or not to give them your vote.

You were part of the Bristol Old Vic when you were younger. Are you looking forward to returning to your old stomping ground? Have you had the chance to return before?

I was a student at the Bristol Old Vic Theatre School where I had a fantastic time and I can’t wait to re-visit the Old Vic, the Old Vic School and Renato’s. I also want to visit friends who still live in Bristol and realise that sadly none of us are 19 or 20 any longer and (I) definitely can’t do a session in the Coronation Tap any longer.

This will be the first time since drama school that I’ve strutted on the Bristol Old Vic stage.

You played Cassius as part of an all-black cast in the ground-breaking production of Julius Caesar. How exciting was it to be part of what was really a historical moment in theatre?

I feel blessed to have been in the cast of that historic production of Julius Caesar. I’ve long said that Shakespeare, performed in cultural settings where there’s still a strong belief in a power structure of Gods, kings and the common man, has a resonance that is lost in a lot of western interpretations, where Shakespeare’s language becomes reverential.

I think we grabbed Julius Caesar and shook the play like Miriam Makeba or Muhammad Ali in the documentary When we Were Kings: Shakespeare became visceral, relevant and powerful. African settings tends to be visceral, as Africa knows the meaning of life, as death is never hidden, it is part of life, it is right before your eyes.

It was fantastic to have various generations of African/Caribbean diaspora actors together in a production. It’s very rare in the UK for so many of us to get the chance to play together. 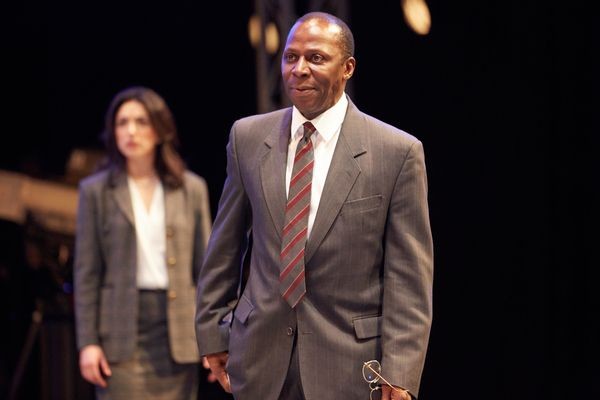 How well do you think British theatre copes with attracting black and ethnic minority groups – both as audience and participants?

To answer you honestly? Not well. Some of this is about the economic constraints on black and ethnic minorities communities who have less disposable income to spend on such pursuits. But equally if there aren’t real efforts made to have the people behind the scenes (directors, producers, writers) and onstage reflect your experience, why would a black audience get the catharsis that they seek from theatre?

It’s a dull old cliché but “white, male, 30+” is still the most common statistic among theatre artistic directors in the UK.

You’re currently on TV as the character Lance in Russell T Davies’ outstanding Cucumber. Do you think there is a lack of televised drama with gay protagonists?

Yes. But let’s not just think making a character gay is enough. Russell T Davies is saying something important, not just “let’s make the character gay”. There are no PC characters in really good writing. Good writing touches the human condition and all sexualities suffer the larger dilemmas of life, so there is no justification for why there aren’t more fully formed, rounded gay characters in a lot of drama on TV, stage, radio or film. A person is not just where they put their genitalia. Russell is one of the most talented writers in the world and Cucumber was the second time in 32 years that on reading a TV script, I’ve thought “I just have to be in this”. Thankfully, Russell, the directors and producers agreed with me.

You are perhaps best known for playing Adam Okaro in The Bill. Do you generally prefer television or theatre work?

I think I used to be known for playing Adam Okaro, but given the recent reaction to Lance Sullivan in Cucumber, I think that may change.

I like being part of a story-telling, griot tradition that helps people to understand, laugh, love and cope with their lives, and their trials and triumphs.

I don’t have a preference between TV/film or theatre. People pay me to keep playing Doctors and Nurses, Cops and Robbers, and Cowboys and Native Americans. Psst – please don’t let them know that I’m still having nursery school fun. They might ring the bell and make me come in from the playground.

The Absence of War is at Bristol Old Vic from 10-14 March.