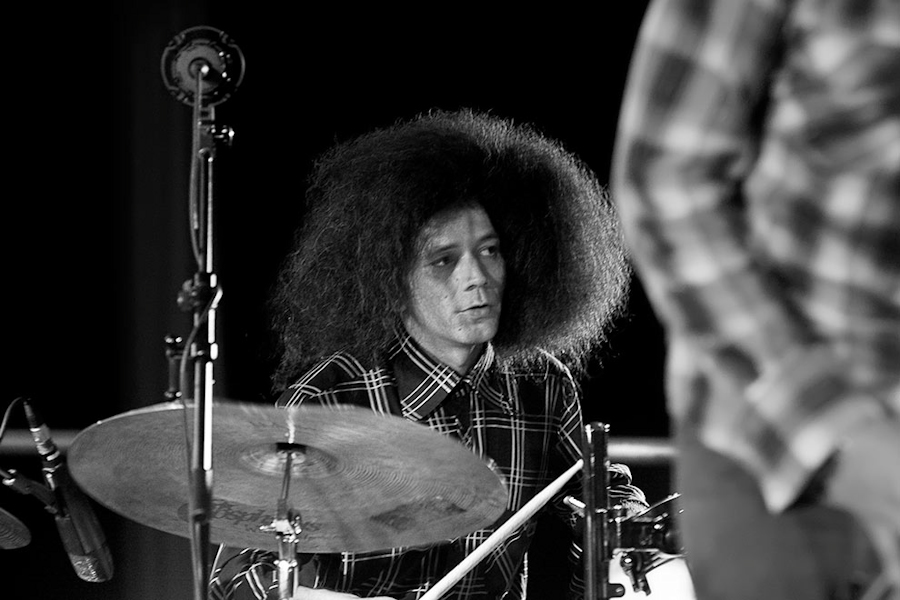 Polar Bear’s outstanding 2014 album In Each and Every One brought one of the UK’s finest jazz outfits back into the recording studio after a four year hiatus. We described the album as ‘an absolute masterclass in musical fusion, melding modern electronica and traditional world rhythms with the debauched intensity of the 1950s jazz originators.’

In fact, In Each and Every One was such an aural delight that we named it as our Best Album of 2014. We got in touch with Seb Rochford, band leader for Polar Bear and one of the most influential and in-demand modern drummers in music, to find out a bit more about the album. As intelligent and modest as ever, Rochford provided us with some great insights into his music, as well as revealing the fantastic news of an upcoming album from Polar Bear.

Hi Seb. Congratulations on your superb album, In Each and Every One. What was the thought process behind the album?

Thank you, I really appreciate that so much. The first idea that came to me was I wanted to create an album that sounded like a musical mist that cleared sometimes to reveal ghosts of melodies and surging beats. I also wanted it to be an honest reflection of what was happening in my and the people around me’s life and that year felt like an extreme year. This album feels like the most intensely personal we’ve ever made, even to the point there’s one tune we don’t really play live because it’s so linked to a feeling that I can’t just switch on or off.

There was a four year gap between Peepers and In Each… What was the reason behind this?

For me, music comes or it doesn’t. I can’t force it. With Polar Bear I only want to make an album when I feel like I’ve moved on from the last one, it is important to me to just create when I feel it is whole in it’s emotion and giving. This can be a short time or a long time.
I remember for a while wondering whether I wanted to make another album with Polar Bear. It was interesting to me that when I said to Tony from the Leaf Label that I might not make another one, music suddenly started coming to me. Psychologically it seemed to free me knowing I had given myself a choice.

Do you think this gap helped the creative process?

Yes. In that time I made a lot of music with other musicians and producers that helped me get fresh perspective on my relationship with music. Playing with Rokia Traore made a big impact on me in so many ways and also started the process of me changing my drum sound and creating new cymbals with Matt Nolan. I was also inspired by people like Matana Roberts, who to me are fearless in the way they express through music

The album was enhanced by stunning artwork. Who provided this?

Thank you, I love it too. The artwork was done by an artist called Craig Keenan. My ex-girlfriend’s parents gave me a gift of a print of a polar bear that I really loved – when they bought it they told Craig it was for me and amazingly found out that he liked our band and then wrote his email and number on the back

What do you think lends Polar Bear their distinctive sound?

I think our sound is a mix of the music I write and the musicians in the band. They are all really special and unique musicians to me. I think also when there is trust between musicians in a band it allows the music to breathe and find its own way through everyone equally. Everyone is supported and encouraged in being themselves.

Polar Bear are a primarily instrumental band. Do you think you would ever incorporate lyrics, as with Acoustic Ladyland?

Yes, there are songs with lyrics on the first three albums and also on the new album that comes out in April. I hadn’t planned on having vocals on the new album but since lyrics came to me I just followed what was natural.

You played Bristol’s Thekla earlier in the year. What did you make of the gig and the city’s floating venue?

I really enjoy playing Thekla a lot. We’ve played there before and was really fun the first time. It  has such a different feeling to it, sensing you’re not on land.

You have lots of musical projects, bands and collaborations on the go. Do you enjoy hopping between genres?

Yes I love playing all the music I do. I’ve always been pretty wide in my tastes of music so it feels natural to me. I know to some people this may seem unusual but its important to me to keep true to what I feel is right for me.

Thanks a lot. We look forward to seeing Polar Bear in Bristol again in April!

Thank you! I look forward to playing. Thank you so much again for thinking of us.