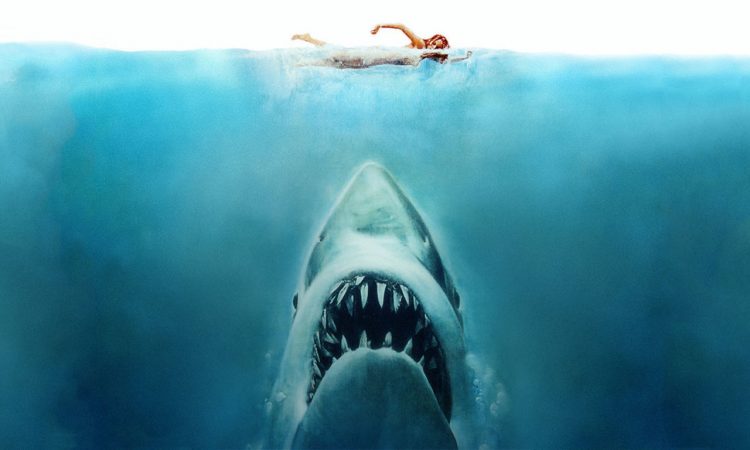 Since its release in June 1975, Steven Spielberg’s Jaws – an epochal moment in motion picture history in its standing as Hollywood’s prototypical ‘Summer Blockbuster’ – has endured as a much beloved film. This is partly evidenced by the number of T-shirt’s adorned with the now iconic sub-aquatic promotional shot of the man-eating Great White among the audience. Many of these are being worn by children yet in their teens; Jaws has evidently made the transition into 21st century cult fandom.

The prospect of ‘Jaws in Concert’ – with John Williams’ much celebrated musical score being performed live by the Czech National Orchestra – appears a great way to inject new life into a long told story. Its sense of novelty is captured almost immediately as a sound of intrigued laughter emits from the audience as the orchestra (there are so many musicians on stage that it’s hard to gauge exactly how many there are – possibly 40-50) elegantly fills a few bars leading into the film’s introductory beach party scene.

Two flirty youngsters appear on the verge of an act of costal coitus, the girl’s decision to venture into the ocean is nicely accompanied by a twinkling harp interlude before she’s devoured to the film’s world-renowned main theme. It’s the film’s first introduction to Williams’ ingeniously simple two-note hook and, considering that the girl was definitely up for it, a devastating and irreversible cock-block.

The orchestra drifts in and out of the now familiar narrative. Put simply, the town of Amity Island – a “summer town that needs summer dollars” from its tourist trade – is thrown into disarray with suspicions of a killer shark in their midst. Chief Brody’s (Roy Scheider) concerns are largely dismissed by the town’s money focused Mayor and disaster ensues –along with the total acceptance that a shark must be responsible – when another swimmer is gobbled up on the busy Fourth of July weekend. Brody then calls upon the services of oceanographer Hooper (Richard Dreyfus) and shark hunter Quint (Robert Shaw) to seek out and eliminate the killer Great White.

Of course, the strident two-note march resumes when the as yet seen killer shark homes in on its prey; there are lighter moments as with the accompaniment to the scene where Brody’s son charmingly mimics the mannerisms of his father at the dinner table; there’s a more subtle and moody backdrop when Brody and Hooper investigate the innards of another suspected shark and there’s the bonus of an extended piece leading into an interval.

The film with live orchestra format is an interesting and variably effective one. After the initial novelty of the immersive live aspect of the film’s score, one tends to finds themselves engrossed in what’s happening on screen and it can perhaps be questioned as to how many amongst the audience are particularly mindful of any significant difference between live and recorded sound. Also, with a visual overload of the musicians on stage, one of the main joys of watching the performance of live music – that being the ability to study and enjoy the visual aspect of a person mastering his/her instrument – is ultimately a bit tricky.

Aside from the musical aspect of the screening, watching a film in such a big space makes for some enjoyable moments of a large audience reacting to a film. Jaws has some genuinely funny moments – such as when Brody pours himself a pint of wine before offering Hooper a measly drop – that induce the sound of laughter and there’s an amusing moment when applause follows Brody’s immortal, now meme spread line: “We’re gonna need a bigger boat.” Also, it’s entertaining to observe to number of people who still react to the film’s biggest ‘jump’ moment when Ben Gardner’s severed head floats into view.

It’s the film’s third act where the film score – and the live aspect of it being performed – comes into its own. The swirling, multi-layered instrumentation manages to simultaneously be wondrous and threatening, quaint and magical as Brody, Hooper and Quint stalk their prey. There are some delightful musical interludes – dropping in and out from subtle to large – during the barrel chase scene and, curiously and ingeniously, it’s the complete cessation of music that gives such a stark and raw feel to Quint’s gruesome mauling.

With 1970s technology as it was, the film’s antagonist was never going to look particularly realistic, and it is of course Williams’ virtuoso composition that stood in so brilliantly for a visual idea of the murderous shark. Over forty years on Jaws still stands up as a solid piece of filmmaking. There are a couple of overheard quibbles about the anachronistic nature of the acting but it’s impossible for a mid-seventies film not to feel dated. The addition of a live orchestra makes for a novel and entertaining spectacle upon which fans can enjoy one of their favourite film’s once again.