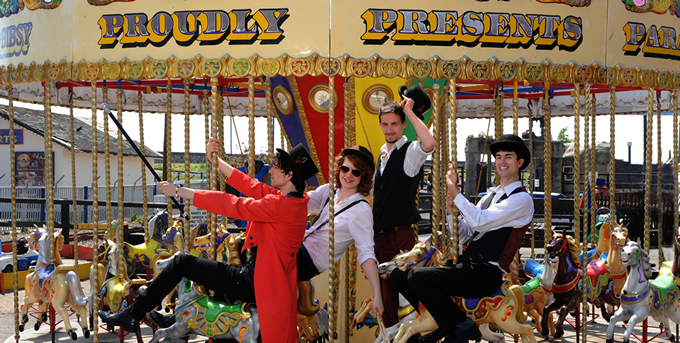 Due to its success over the past few years, The Godney Gathering now attracts interest on a national level with rave reviews on the likes of the highly renowned E-Festivals website spreading the word that it’s one of the more exciting events in the UK. That’s largely thanks to the calibre of music on show and although massive headliners will be the reason most buy a ticket there’s a chance to stumble upon some of the best unsigned talent in the country too. Here’s a little bit about the bands involved on the day…

These Britpopper youngsters from Bristol deliver grungy, punchy and energetic guitar driven tunes that has seen them gather quite the following. The highly regarded four-piece are headed by Fin O’Brien whose vocal has flashes of Pete Doherty and Jamie T that complements catchy and melodic riffs. Check out the band’s official website here.

Fix Pick: Scott Hammond – Hailing from the civil parish of nearby Langport, the Somerset five-piece utilise guitar, drums, bass and saxophone to deliver an exciting genre mash up of ska, funk and gypsy folk. With lively, high-energy rhythms, wailing sax and the distinctive chop of ska flavoured guitar, Fast Decline deliver ultra-danceable summer sounds perfect for a boogie and festival frolics in the sunshine. In particular, listen out for infectious saxophone hook of ‘The Downbeat Joker’ and the frantic mischief and rapid MCing of ‘Release Your Mind’. Find out more at fastdecline.com

Here’s a line from their official website – “The Skull Kids began rummaging through pop culture’s recycling bin like a starving Rocky Raccoon.” I’ve listened and I can’t define them but their songwriting choices are certainly interesting. Songs could provide the soundtrack to a Tim Burton musical or an eccentric dreamer’s cabaret act involving a mish-mash of robots, dolls and toys. There’s definitely some ska in there. They’ll be fascinating – that’s for sure. Their website is pretty god damn quirky – Take a look here.

Based in Birmingham, this indie-rock four-piece met at University and bring an upbeat and accessible post-2005 sound to proceedings. According to their Facebook page the lead singer can’t be kept under control, which means we may be in for seeing a bit of a livewire on stage. Influences include The Kooks and Foals. Regular updates can be found on their Facebook page.

This six-piece offer up a fusion of ska, reggae and punk that will “make your feet move, your head bang and your bits get all excited” – I’ve made sure I put that as a quote as that’s not our words. That’s not to say it’s wrong. What does it for you is none of The Fix’s business… You can find out more about them on their official website.

A Glastonbury 5-piece made up of blues lovers, Swampgrass claims to play a brand of blues that borrows styles such as swing, country, bluegrass and funk, whilst keeping it upbeat. The band is fronted by Sharon Honeywell, who always delivers a belting vocal performance. Head over to swampgrass.co.uk for more.

Four young Welsh lads from Bridgend who deliver indie-rock with a bit of a punk-pop feel to it in places and more heavier alt-rock in others. Influences stem from the likes of Deaf Havana and Bastille but the sound would suggest there’s a more eclectic range of tastes from the 2000s onwards. More on these chaps can be found on their Facebook page.

Tickets for this year’s Godney Gathering sold out but with line-up announcements and ticket details for 2016’s event to be released soon, keep an eye on thegodneygathering.com or follow on Facebook for updates.