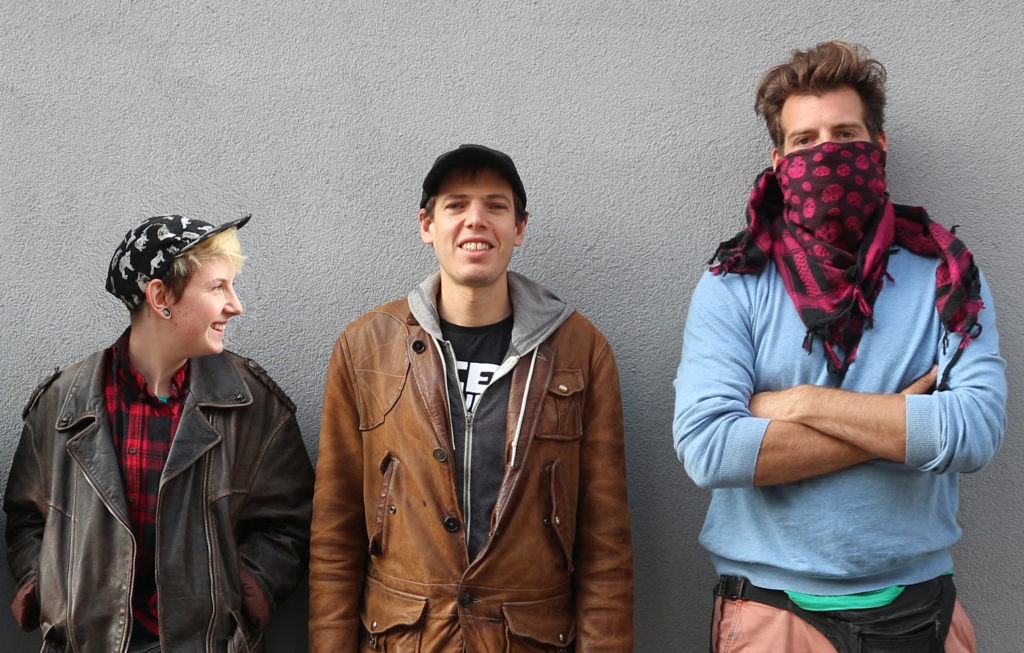 The fact that he responded personally from his own email account to arrange my +1 guestlist slot for tonight’s show highlights something rather unique about Jeffrey Lewis. While also not adverse to stewarding his own merch stand and sleeping in fans’ houses during tours, it’s this charming sense of accessibility that has earned the New York singer-songwriter and comic book artist a loyal cult audience.

Though there was a moment over a decade ago where it seemed Lewis would venture further in from the commercial outskirts – I recall multiple plays on Radio 2 and Josie Long sporting one of his T-Shirts on Never Mind The Buzzcocks – this evening’s sold out appearance at the 250 capacity Exchange feels exactly as it should be.

Disregarding his long ago defeat to male pattern baldness, the newly long strands of dyed blond hair each side of his bonce give Lewis a vague appearance of early 90s Hulk Hogan. He and Los Bolts – bandmates on bass/keys and drums – begin with ‘Kongru Green Slime’. It’s a song of distinctive Lewis character; typically loquacious mind-spill atop a repeating three chords of finger-picking. In similar vein, ‘Arrow’ largely sticks on two chords as Lewis ponders life’s ticking clock with verbose, often surrealist imagery (“There are no babes in wheelbarrows, no tooth fairies, no tomorrows”).

Commonly placed within the ‘anti-folk’ genre, it may be fair to say that Lewis’ style is somewhat ‘anti’ as a general rule. The distinctive nasal flatness of his vocal style, which often detours into spoken word, could be fairly described as anti-singing. Also, he’s almost an anti-songwriter; he’s largely dependent on ultra-basic three chord repetitions which serve as a DIY backing to his lyrical default. This, of course, is Lewis’ trademark and thus not a criticism. There are glimpses, however, of a more conventionally melodic bent: ‘Broken Broken Broken Heart’, with its tunefulness and punk-lite interludes, is an enjoyably catchy burst of songcraft.

Obviously, the combination of wordiness and simple chord patterns isn’t Lewis’ calling card without reason. There are three moments tonight whereby this formula displays him at his best: ‘My Girlfriend Doesn’t Worry’ reveals that his busy lyricism is perhaps a manifestation of a real life tendency for absurd introspection as he humorously traverses between existential overthink and a neglected partner; 2001 favourite ‘Chelsea Hotel Oral Sex Song’ – a deprecating, bittersweet tale of briefly bonding with an attractive stranger over Leonard Cohen – draws many laughs from the audience. Meanwhile, ‘The Last Time I Did Acid I Went Insane’ sees Lewis comically struggle with the arbitrary nature of truth and personal subjectivity before brilliantly spiralling into an exaggerated spoken word confusion.

As is to be expected, we see the comic book artist side of Lewis’ modus operandi. Joking that there’s “nothing more rock and roll than a documentary film series”, he projects his artwork on to a cloth screen for the latest instalment of his long running ‘Complete History of Communism’ episodes. The series is now at part 7; over a sequence of cartoons and the drum and bass backing of his band, Lewis narrates the history of socialism in Cuba.

After a series of cover songs (including Crass’ ‘Systematic Death’, Parquet Courts’ ‘Stoned and Starving’ and an unexpected version of Iron Maiden’s ‘The Trooper’), he offers up more drawings to narrativize two songs from Nirvana’s Bleach. The humorously short pieces on ‘Big Cheese’ and ‘Mr Moustache’ reveal both the off-kilter and – as the antithesis to Lewis himself – the surprisingly scant nature of some of Kurt Cobain’s early lyrics.

Jeffrey Lewis’ refusal to leave the stage as he seemingly prolongs tonight’s show on at least a couple of occasions appears further evidence of the generous connection he has with his audience. He and his Los Bolts finally take leave of the stage and no one in the audience should be surprised if they end up sleeping on your living room carpet.