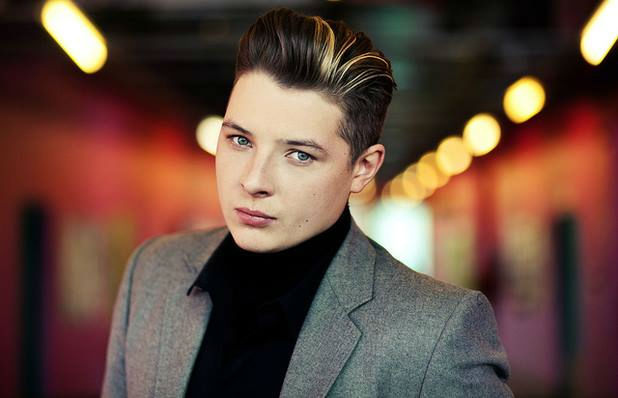 Review by Carly Dutton – In 2013, 23 year old John Newman from Settle, North Yorkshire, released an album showing him seemingly older than his years with deep and heartfelt lyrics, but don’t be fooled into thinking this is an album of soppy love songs,  there are bassey tracks to get you moving and even the slower ballads are full of grit. Kicking off his tour this January, Newman’s gig at O2 Academy Bristol was the second venue on a UK marathon which runs until the end of February. At the start, delighted fans were kept in suspense with a black curtain hiding the entire stage. As the melody of the the title track on his album “Tribute” began, the cheers started to build. The crowd were kept in suspense further with Newman singing the whole first verse whilst hidden, before the curtain finally dropped as the chorus kicked in leaving the crowd to go mental. Matching Newman’s general style, the set had a ‘classy’ feel to it, all gold and silver with the feel of a 50s jazz club. Keeping the momentum going, Newman went straight into “Try” and “Cheating”, the latter having been released as a single in October and thus receiving a great response. After this, Newman speaks his first words to the audience: “The reason I’m here is because of “Tribute”, and this is my fucking tribute to you,” before launching into a very heartfelt rendition of “Easy”, followed by “All I Need Is You” and “Goodnight Goodbye”. Introducing his next track with “I love the reaction this song gets”, the crowd knew they were in for something special and a collective cheer swept the room as the first few notes of “Losing Sleep” began. A collective bounce around soon ensued with great energy from Newman and the crowd. The set really came to light during this song when the five glitter balls at the front of the stage were used to their full potential with lights bouncing off of them to spread beams around the whole venue. After the energy of “Losing Sleep”, Newman’s next track, “Out of My Head”, seemed especially dramatic with Newman putting in his all. Referring to “Day One”, Newman revealed that: “Everytime I get pissed off I sing this song.” The track included a great instrumental section from the band with powerful guitar, bass and drums. Finishing his set with “Down The Line” and “Gold Dust”, Newman left the stage for a refreshingly short encore, seeming eager to get back on stage to perform more for the crowd. The first track after the encore, “Not Giving In”, began with a stripped down acoustic version of the Rudimental song that got him started and kicked into its full scale after the second verse. Newman’s last track was the single that reached number 1 in the UK in July. “Love Me Again”’ matched with his notorious funky dance moves as he ended with a slightly more dishevelled quiff than when he started. A delighted Newman, who obviously enjoys performing profusely, then bounced off the stage and no doubt looked forward to the next leg of his tour. Find out more about John Newman at his official website.
Follow @Thefixmag
Recent Posts
We Like You…