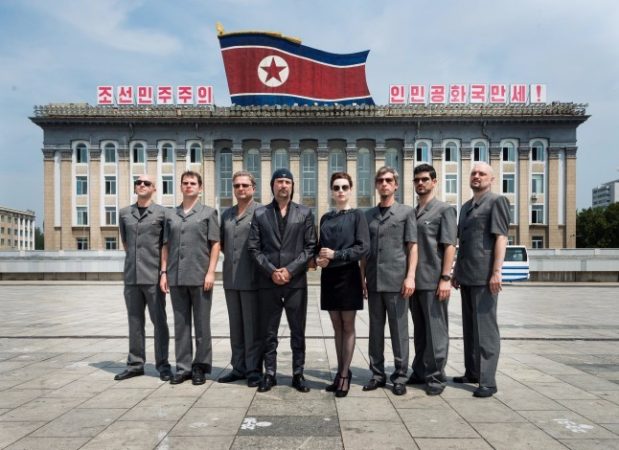 In the world of documentary film, the strength of a final product is, of course, sometimes contingent on the surprising or peculiar nature of its subject matter. Whether it’s former Indonesian death squad members retelling the story of their crimes through dramatized film scenes (Joshua Oppenheimer’s genuinely jaw-dropping 2012 effort ‘The Act of Killing’) or erstwhile Scientologists revealing the dark coercion and theological bunk of their former church (Alex Gibney’s excellent ‘Going Clear’), there are times when the documentary form echoes the old maxim of life being stranger than fiction.

And so we have ‘Liberation Day’, the surface ingredients of which make it absurdly fascinating even before one delves into the details of its ninety-eight minute account: In celebration of the 70th anniversary of North Korea’s liberation from the Japanese Empire in August 1945, Slovenian art-rock group Laibach became the first Western band ever to be invited to perform a concert for the people of the PDRK. As the film’s director Morten Traavik says, “It was the blindest of blind dates.” If that concept wasn’t bizarre enough already, Laibach were permitted to include cover versions of songs from The Sound of Music among their setlist.

Described as a “spiritual orphan of Tito’s Yugoslavia” and possessed of an ambiguously satirical reputation for flirting with fascist imagery, the North Korean regime’s choice of Laibach was perhaps in keeping with the tragi-comic oddity of the Hermit Kingdom; certainly, it would’ve be even stranger had the invitation instead been extended to Coldplay or The Killers. The question of exactly why they were the band selected isn’t completely answered (though the film touches on Laibach enthusiast Traavik’s past cultural collaborations with the North Koreans) and we see the towering absurdity of the situation plundered in a clip from John Oliver’s ‘Last Week Tonight’.

‘Liberation Day’ is largely a behind-the-scenes concert documentary with significant segments of the film following the progress of Laibach’s preparation ahead of their performance. However, the essential element of North Korea’s playing host make the film quite something else: The sights of party flags, orderly processions of citizens and murals of their beloved leaders adorning the huge grey palaces of the regime evoke the dark heart that lurks beneath the benign superficialities of Pyongyang, while intermittent news stories – tensions across the DMZ with exploding landmines and artillery fire, and the detainment of American citizens including Otto Warmbier – are reminders of the country’s potential role in catastrophe.

The film’s best moments arrive via the fact that rehearsals and preparations for the Laibach’s live performance were endured amidst a culture-clash storm of misunderstanding, disagreement and bureaucracy. Mic stands are confused for keyboard stands, an electrical socket in an adjoining bathroom is the only remaining home for an equipment cable and the sighting of nude statues on the band’s background projections calls for some last minute editing. In his dual role as both director of the film and of Laibach’s historic live performance, Traavik takes centre stage and amusingly shifts between ironic acceptance and barely concealed patience in response to his nervily censorious and uncomprehending hosts.

Footage of the concert is the climax of both the film and the absurdity of the spectacle; Laibach launch into their song ‘The Whistleblowers’, their lead singer delivers his strangely deadpan vocals while adorned in Nazi-esque headgear and the audience reaction – oscillating between bafflement, mild irritation and, later, a vaguely curious acceptance – is priceless.

The film lightly touches upon some themes; an opening montage seems to draw a parallel between the fanatical hero worship of the West (Beatlemania/a manic fan who gets to hug Michael Jackson on stage) and the lachrymose devotion toward the North Korean leaders. Also, a member of Laibach’s entourage comments on the pervasive requirement for self-censorship in everyday life – “we are all North Korea”.

Ultimately, it’s the sheer sense of farce, resulting from the incongruity of this unlikeliest of encounters between East and West, on which the film thrives. And despite Laibach’s apparent irony and opaque sense of satire, they achieved some manner of unprecedented contact with North Korea. The part of the film whereby the band’s Korean chaperone laughs heartily in reaction to Traavik demonstrating the sound of a theremin, is the briefest of junctures where an aperture of sunlight appears to have penetrated the wall.

For the people of North Korea, it would be great to view this briefest of moments as some sort of allegory of progress and enlightenment to come. However, with the country so engulfed in its own tyranny, one suspects that it will merely remain as a touching moment in a fascinating documentary film.

Liberation Day is released on iTunes on Monday 17th July.