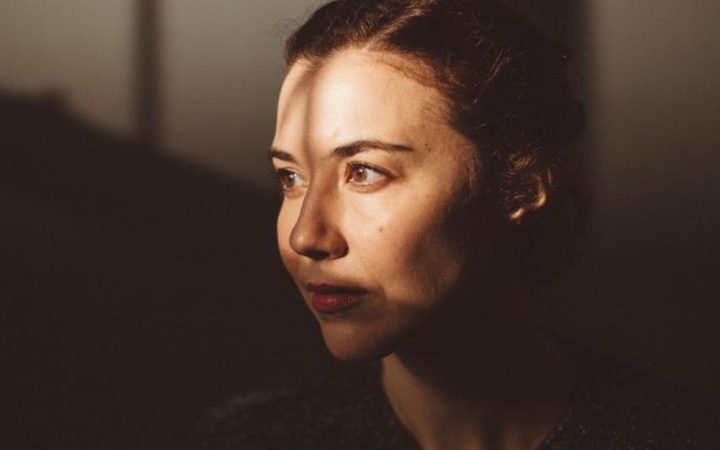 Already boasting a well-regarded music scene, one further advantage held by the city of Bristol is that – either right before or during the frolics of the Glastonbury Festival – a coincidence of geography places it as a natural pit-stop for artists imminently bound for Worthy Farm. Thus it’s the case this evening as Irish singer-songwriter Lisa Hannigan stops over before her Sunday afternoon appearance on the Park Stage. With many music fans in this part of the country having already ventured southwards to Glasto, there’s also a slight feeling of exclusivity; here Hannigan delivers a lovely and intimate set in front of a barely half-filled Marble Factory.

Aside from her knack for a pretty melody and her skills as a multi-instrumentalist, it’s Hannigan’s delicate, breathy vocals that make her such a formidable artist; this is immediately evidenced with opening track ‘Ora’, a vocally demanding tune that sees her soft, caressing timbre combine with yearning falsettos and background cries. ‘Prayer for the Dying’ – though clearly wearing its sombreness on its sleeve – is nonetheless an ethereal moment as Hannigan’s longing delivery soars brilliantly atop her picked acoustic guitar, double bass and synthesised string arrangement.

Playing nine of the eleven songs from last year’s At Swim, the evening’s set is heavy on the newer material. Following ‘Undertow’ – a duel of gasping keyboards and Hannigan’s perky mandolin – Hannigan describes how she was required to learn to sing backwards for the purposes of recording the song’s video and amusingly demonstrates a couple of lines for the audience. ‘Lo’ is another pick of the newer tracks, its themes of panic-induced insomnia belied by an energetic sprint through Celtic-tinged folk.

It wouldn’t be too controversial to state that the approach of performing so many tracks from the latest record sees Hannigan eschew several of her best songs. However, there’s room for a few highlights from her first two albums. After declaring “It’s just us now” as her four bandmates depart from the stage, Hannigan delivers the exquisite ‘Little Bird.’ Pouring over the dying embers of her relationship with Damien Rice, it’s a devastatingly emotive breakup song and a striking example of Hannigan’s ability as a songwriter. We are also treated to the beautiful ‘Lille’ which – along with the early appearance of ‘Pistachio’ – is the only surviving track from 2008 debut Sea Sew.

‘Passenger’ – the title track from Hannigan’s second album – is a fun and charming ukulele-led ditty with playful travelogue lyrics (“Walking round Chicago, I have smuggled you as cargo”) and the sort of song needed to offset the generally weighty moods of the newer tracks. There’s also the unexpected appearance of ‘Flowers’ – an extra track on the itunes version of Passenger – which sees the band ensemble at its most upbeat and features a tasty solo from Hannigan’s support act/guitarist John Smith.

Hannigan, for the most part, remains politely subdued in her audience interaction but she does recall the lascivious post-song heckle of “Ooh la la” during a show in France and thanks the crowd for coming out “when you could’ve been at home watching Foo Fighters.” Also, before lovely duet ‘O Sleep’ – featuring Smith adroitly filling Ray LaMontagne’s lead vocal role – she states “Thank you to the enthusiastic ‘yeah’ guy” in response to an overzealous audience member who greets the end of each song by bellowing out “Yeah!” at the top of his lungs.

For the encore, Hannigan is joined by two of her bandmates in delivering an acapella re-imagining of the Seamus Heaney poem ‘Anahorish’ and, despite “the enthusiastic ‘yeah’ guy” further making a fool of himself by loudly failing to incite a clap-along during the plaintive ‘Fall’, the song is effectively rendered with Hannigan’s acoustic guitar and her quartet of bandmates lining up beside her to complete a five-way harmony.

An enjoyably intimate show from a talented and underrated artist.