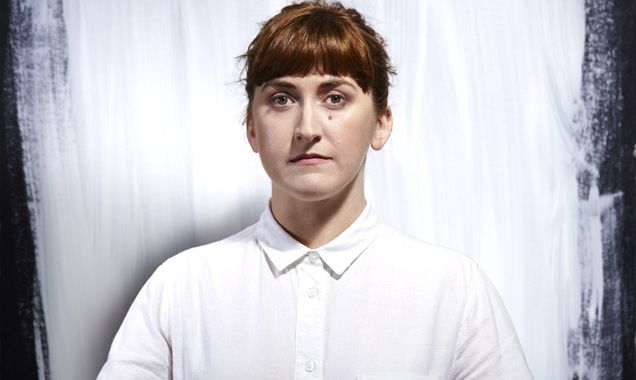 It’s not often that a gig for such a gifted performer is so intimate that one receives a light ridiculing from said performer before the show has even begun. Alas, this was my experience of Manchester-based Liz Green’s appearance at the delightfully cosy lower deck of Bristol’s floating venue, The Grain Barge.  Sat making notes as the singer/songwriter takes to the stage and requests appreciation for her support act, my diligent scribbles cause me to belatedly join in with a flimsy couple of idle claps just as the applause dies out. Sat atop a wooden barrel just ten feet from the tiny stage, I am the proverbial duck as Green shoots me with an incredulous “What’s that?” and playfully mimics my lame ovational contributions. My gentle chiding highlights the tight proximity of tonight’s show and reveals Green’s penchant for impish humour even before a note has been struck.

Green and her band of musicians open with ‘Battle,’ the first track from her recently released second album “Haul Away.” The song’s instrumentation is so subtle as to render it a near a-cappella performance with Green’s unique voice enunciating clearly above the moody mutterings of flute, double bass and alto sax. The title track from the new album follows, it being driven by dramatic brooding piano before evolving into a gypsy folk swing at the song’s choruses.

Defining Green’s music is no easy task, it vacillating between moments of subdued delicateness and gripping, storytelling theatrics via a confluence of folk, blues and jazz. This converging of styles continues to manifest in the Bossa nova rhythm of the guitar picked ‘Rybka’ which features Green’s triumvirate brass section of tuba, sax and trombone at its most prominent. There is also a cabaret type mood in the air, thanks in no small part to Green’s relentlessly droll in-between song badinage and the fact that the majority of the audience are sat at candle-lit tables some distance away from the stage; the anachronistic feel of Green’s music and the sense of exclusivity provided by the smallness of the crowd serve to provide an atmosphere that could well be an accurate evocation of a New Orleans cabaret club circa 1935.

Green, both musically and personally, seems perfectly comfortable in her own skin and her repartee, instead of merely filling gaps between songs, provides a consistently engaging sideshow.  An unfeigned stream of consciousness takes us from dry humour to absurdity and hers is always a quirky, understated charisma. She introduces ‘Island Song’ as “like the film ‘The Island’….but not as shit” with perfect comic timing and, in stating that the only four emotions are “Love, anger, sadness and hate,” Green confesses to a potential autism. Revealing that all her songs are pop songs that went wrong “like biscuits in a factory without a head or legs,” she introduces the mischievous tuba and trombone waltz of ‘Displacement Song’ by declaring her music “The headless biscuits of pop.”

Playing mostly tracks from “Haul Away,” Green offers her first venture into wordless song-writing with ‘Little I,’ a soothingly pretty piano and flute instrumental possibly influenced by Green’s admiration for ex Coral guitarist Bill Ryder-Jones’ album “If…” The new record’s added emphasis on piano driven songs is further evidenced by “Where The River Don’t Flow” with the stop/start drama of its verse and the bouncy piano and full band sway of the chorus. The excellent ‘Bad Medicine,’ Green’s first ever single in 2007, features her redoubtable mouth-trumpet skills and, after informing the audience that once shaking hands with David Bowie in a bookshop was “unspoken agreement that I can murder one of his songs,” the night finishes with a cover of his ‘Five years.’

While the single register of Green’s voice is not one that will span through the octaves, she possesses a gift that is imperative to any vocalist worthy of note: distinctiveness and a quality of instantly recognisability. She is no doubt a gifted musician with strong songs, a decorative lyricism and an ability to tastefully fuse a myriad of old-fashioned styles. The folks at The Grain Barge should feel fortunate at such ample abilities being contained within such small confines and, in recalling how the night began, I feel honoured at being mocked by one so talented.