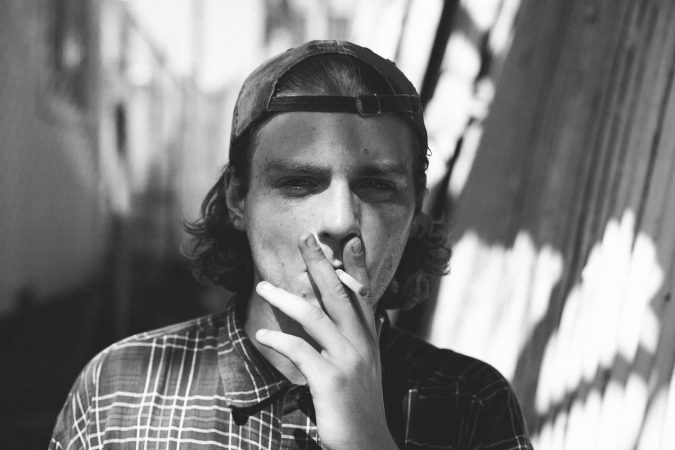 When a deep, robotic voiceover jokingly introduces Mac Demarco as “45% a giant and riddled with disease” as he enters the stage carrying a three can stack of Stella Artois, it’s very much in keeping with the Canadian singer-songwriter’s appealing goofball persona. However, within the gap-toothed funster’s impish façade lies a reflective heart and the inclusion tonight of nine songs from latest album This Old Dog – a record within which Demarco ponders his estranged relationship with his father – makes for a show curiously balanced between mellow introspection and his perhaps more familiar sense of hedonism.

Unsurprisingly it is an old favourite which, two songs in, induces the first instance of the latter; the bouncy melodic joy of ‘Salad Days’ sends the sold-out audience into a swaying, amorphous beast somewhat at odds with Demarco’s downbeat allusions to a quarter-life crisis. This is followed up with ‘No Other Heart’ – Mac’s lovely, soft-hearted paean to unrequited love – but not before he reacts with impressive instincts to catch a gift of Heinz baked beans tossed from the crowd.

It’s by no means the only instance of stage-bound presents being thrown from amongst the audience, or for that matter, of Demarco’s healthy hand/eye coordination. His catching of a red rose results in partial, tongue-in-cheek renditions of Seal’s ‘Kiss from a Rose’ and Demarco and his band intermittently sport baseball caps and novelty shades that are launched on to the stage.

What soon begins to emerge is almost a gig of two halves – a dichotomy largely drawn up between the breezy fan favourites from 2, Demarco’s second album, and the more ponderous bent of the newer songs. The glittering ‘The Stars Keep on Calling My Name’ is rapturously received as is the funky guitar intro to ‘Cooking Up Something Good’ which sees Demarco circle the stage with a Python-esque comedy walk.

One also notices how some of the sharp, sun-baked guitar lines now emanating from guitarist Andy White’s instrument have fought their way into audience affections since the release of 2 in 2012. The crowd actually sing along to the intro riffs of ‘Freakin’ Out The Neighbourhood’ while ‘Ode To Viceroy’ – Demarco’s tribute to his preferred brand of cigarettes – is slowed down to offer a sense of anticipation before brilliantly exploding into its iconic, cascading outro solo.

During these moments – ones producing multiple sightings of crowd surfing and the occasional dispatching of audience members by security staff –  there’s a genuine sense of excitement. However, the new songs repeatedly serve to lower the tempo; at best this gives the gig a fuller musical dimension, at worst it impedes on the potential for a blissfully rambunctious rock and roll show.

That’s not to say that the new songs aren’t good. In fact, This Old Dog is a fine album featuring some of Demarco’s most reflective and mature songwriting. Appearing early in the set, the record’s title track highlights his growing knack for a plaintive melody and ‘A Wolf Who Wears Sheep’s Clothing’ is a jaunty duet of acoustic guitar chords and White’s infectiously bubbly guitar lines. The piano-driven ‘My Old Man’ has the band sounding like a lounge jazz act while, with ‘One More Love Song’, Demarco is promisingly revealed as a nascent balladeer.

After close to 90 minutes of Mac songs, it’s time for the band’s now customarily loose jam session of cover versions. ‘Under The Bridge’ sees Demarco on drums while his drummer takes up the Anthony Keidis role and jumps headlong into the crowd. There are blasts of The Darkness, Sabbath, Blink 182, Rage Against The Machine and Warren Zevon.  Demarco drinks beer atop a speaker stack, executes several star jumps and performs a brief hand stand. It drags on a little, oscillating between good fun and a little self-indulgent. However, it takes the performance beyond the two hour mark and it’s hard to begrudge Demarco – clearly having a blast – back in the role of likeable goofball.