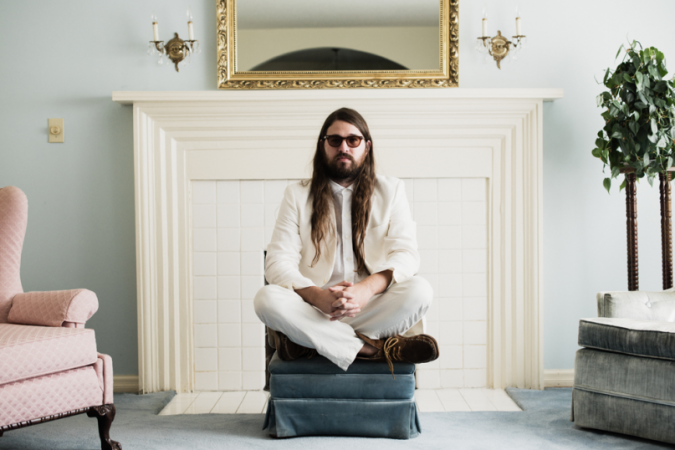 “Rock n’ roll is cold”, Virginia musician Matthew E White sings on the lead single from his excellent sophomore record Fresh Blood, released last month; judging by the atmosphere at The Marble Factory tonight, it can also be a little dank and underwhelming in attendance. The no-frills simplicity of Bristol’s newest music venue certainly seems heavily at odds with the florid instrumentation and unabashed romanticism of White’s hard to define blend of soulful, gospel-tinged rock. As things transpire, it’s a sound that serves to brighten the austere surroundings.

If love be the food of musical inspiration, White certainly seems to be getting his share; opening track ‘Take Care My Baby’ is a soul-infused love letter of melodic, duelling guitars while the measured rhythm section and bluesy licks of ‘Love is Deep’ see him repeating “Love is deep shit/Love is sweet shit, man”. The romance is only spoiled when talking from the audience is clearly audible over the relatively gentle vocal refrains at the outro to ‘Big Love’; small pockets of Sunday drinkers who view a quality musical act as an incidental backdrop to stale bouts of logorrhoea, are evidently among us.

A broken guitar string before ‘Fruit Tree’ provides an opportunity to engage with the crowd and White offers up the first of several gregarious interactions. He recounts the story of his percussion player falling ill with pneumonia while playing the Thekla in 2013; all ending happily thanks to the good old NHS. Elsewhere, we hear the story of White’s loyal but brutally honest Manchester fans telling him “Great show, but you need to work on your jokes” and he describes how the role of any guitar teacher is essentially 70% babysitting.

Wearing a sharp grey suit (as are his three bandmates) and sporting his signature Jesus combo of beard and long hair, White resembles something akin to a snappily dressed bear. His baritone mumble for the most part sits subtly audible within the band’s instrumentation but occasionally extends to emotive moments of clarity as with the chorus delivery of ‘One Of These Days’. Going against his instincts not to “abuse a false sense of power”, he later cajoles the audience into contributing “Ya, Ya, Yas” to the Hey Jude style singalong of ‘Feeling Good is Good Enough.’

And feeling good the band seemingly is; White on several occasions smiles while catching the eye of his bandmates and, fuelled mainly by his paradoxical, diva-like insistence on not being diva-like (he doesn’t like anyone else packing up his equipment), the repartee between White and his guitarist provides a fairly entertaining sideshow. The band become more animated as the night progresses; the guitarist adopts Pete Townsend-like spins and the others show clear signs of enjoyment as they extend the songs into a series of instrumental jams; devoid of the songs’ usual brass and piano arrangements, such rock outs leave behind the ornate romance of the recorded versions.

Despite a second broken guitar string, a few tuning problems and the soppy, power ballad clichés of ‘Will You Love Me’ (“And this loneliness, it won’t leave me alone”), the tight, four-piece musicianship of White’s band utilises warring guitars, octave meandering bass and sentient use of lap-steel to satisfying effect .

Towards the end of the performance, White humbly states that he is always appreciative of people coming to listen to his music, irrespective of the size of the audience; he is perhaps alluding to tonight’s show, evidently not particularly close to selling out the 550 capacity venue. When he and his band emphatically complete the encore with an ear-bleeding ‘Holy Moly’, it feels like a far-reaching clarion call to those who decided to stay at home; they’ve missed a highly enjoyable show.