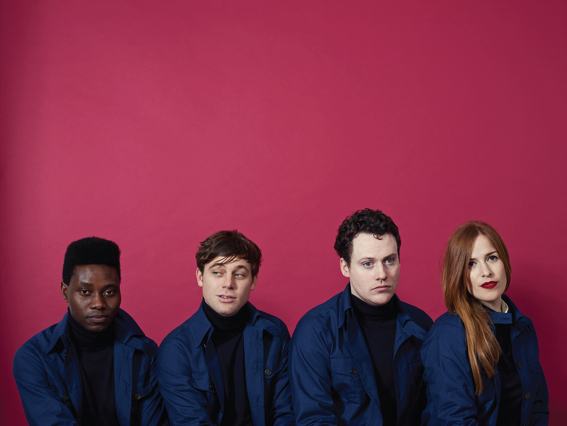 As a studio album, ‘Love Letters’ is a solid if unspectacular follow-up to 2011’s excellent Mercury nominated ‘The English Riviera’. It has reached number 7 in the UK charts, and while it doesn’t necessarily add anything extra to the band’s distinctive sound, it gives them a firm foundation to expand upon. When played live, Metronomy manage to bring the album to life, injecting it with added melancholy, fun and intrigue.

Undoubtedly Metronomy have improved as a live outfit. Touring ‘The English Riviera’ was a low-tech affair, the only theatricals being dim lamps strapped to the band members’ chests, glowing rhythmically. Now, the band is backed by an impressive stage set of neon clouds, with keyboards that light up like jellyfish. While they have always been an impressively tight live band, they now have a confidence that allows them to own the stage and play around with their material.

Under live conditions, breakdowns in songs such as “The Bay” become full-on Hot Chip-esque electropop parties, and the basslines provided by Olugbenga Adelekan infuse Mount’s melodies with a grimy funk. The band switches pleasingly between full-on anthems and low-fi ballads. The disco “Boy Racer” would make Giorgio Moroder proud, while “I’m Aquarius” is heartfelt and soulful.

Unsurprisingly, the most popular material of the night comes from Metronomy’s outstanding back catalogue. “The Look”, “Radio Ladio” and “Heartbreaker” are all received rapturously. The stand-out moment is the duet between Mount and drummer Anna Prior on “Everything Goes My Way”, the two voices contrasting gloriously.

In all, Metronomy provide an excellent live experience, and are continuing to improve and become more comfortable playing their own material. Their ability to play extremely tightly as an outfit is negated only by the substandard acoustics of the O2 Academy, and on this performance they deserve the success they are getting.