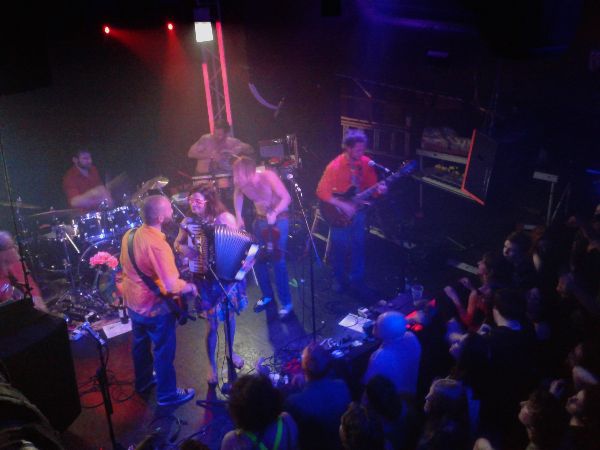 Somewhere there is a record for the hottest gig venue. For Molotov Jukebox’s set, the record has been absolutely smashed as the crowd drips aboard Bristol’s floating Thekla venue. Still the gypsy-step outfit aren’t satisfied – vocalist Sam Apley tells the crowd he wants to “see more gleam” before musing that his violin “isn’t supposed to be this wet” and removing his soaked shirt.

Molotov Jukebox make it clear that they are in town to party, and, despite starting their set surprisingly early, they manage this magnificently. The band seem to have one gear for their live sets, and it is a high one. Often bands need to implore a crowd to dance, but for Molotov the music does this for them, and a symbiotic relationship develops between audience and musicians, keeping the tempo up. There are few, if any, dud tracks. While none in particular stand out as memorable, when played together they create a fantastic fiesta atmosphere.

The easy reference for a band of this ilk is Gogol Bordello, the US gypsy punk band, but Molotov’s sound is more influenced by mariachi brass, ska-punk riffs and samba rhythms, and is less aggressive than other gypsy outfits. It is clear that the driving force behind the band is frontwoman, vocalist and accordion player Natalia Tena, whose sideline in acting (most famously in the Harry Potter films and Game of Thrones TV series) led to this gig being postponed first time around. Her vocals manage to cut through the bombast of the band.

Molotov have a strong fanbase following some innovative online antics. Their Youtube video for “I Need It” features the band attempting to play 1000 live shows in a single day through relentlessly performing to users on ChatRoulette. On the evidence of tonight, it is a fanbase that will stay loyal and surely only grow. Molotov Jukebox came to Bristol to party, and party they did.