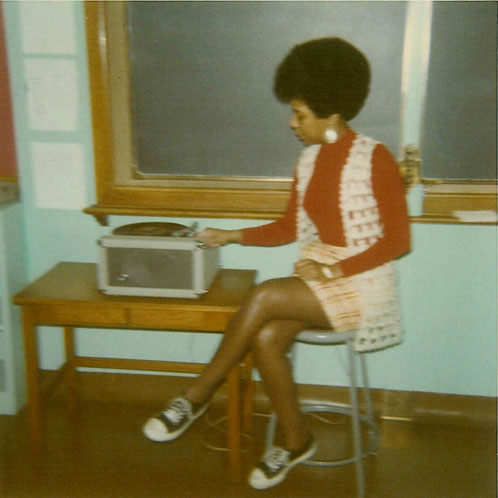 As a music teacher in New York State, Nancy Dupree soon grew tired of the songs that she was expected to teach her young protégés at Rochester School No. 4; as a result Dupree, a radical and effusive educator, introduced the children to the songs of Nina Simone, Odetta and Miriam Makeba. Subsequently rewriting and adapting these songs, in order to make them more relevant to present day social concerns, Dupree and her class soon progressed to creating compositions of their own.

“James Brown” was composed on the Monday after her pupils had witnessed the song’s eponymous hero at a show in their hometown of Rochester and, according to Dupree, the children were “still full of the sight, sound and feel” of the Godfather of Soul.

Considering that they are merely the capturing of a music teacher sat at a piano with a group of elementary school children, it is incredible to think that “James Brown” and Ghetto Reality, the album from which it is taken, ever saw the commercial light of day; the album was released on Folkways after Dupree took advantage of a serendipitous aeroplane flight where she was able to accost the label’s founder Moses Asch.

Dupree was fired from her teaching post just a year after the record’s release and, despite the given reason of a refusal to wear high heels, her progressive, black feminist politics (she later become a Black Panther) and defiance of conformity perhaps hint at  more realistic, and pernicious, reasons for her sacking.