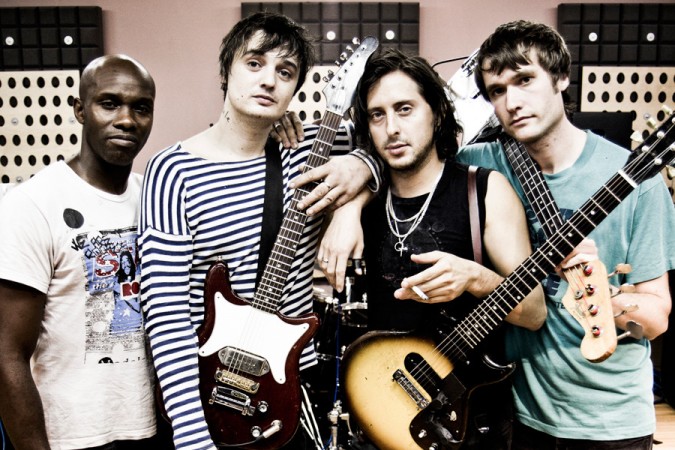 Via a tumultuous ride of acrimony, addiction, intra-band burglary, a triumphant Reading Festival reunion in 2010 and their surprise appearance at Glastonbury this year, ‘Gunga Din’ is the first new release by Pete, Carl and those other two blokes in over a decade. Though featuring a ska-like flavour seen in some of the band’s previous work, the song has less of The Libs’ slightly ramshackle, crossing-a-rickety-bridge-in-a-Hollywood-classic type quality. There’s also a catchy, singalong chorus that is sure to build eager anticipation for new album Anthems For Doomed Youth to be released next month.

Doherty and Barat will no doubt claim that the song’s title is inspired by Rudyard Kipling’s poem of the same name. However, as a side effect of his drug rehabilitation, Doherty has developed an unhealthy obsession with 60s animated series The Famous Adventures of Mr Magoo and it is this show’s less known adaption of Gunga Din from which he drew inspiration. When Doherty is heard saying “What are you doing, you stupid fuckin’ idiot?” at the song’s close, it is actually a reference to his perpetual lamenting of yet another act of idiotic boobery by his bumbling, myopic hero.

Musclebound Madge is now so keen on the weights that she can’t even resist pumping a bit of iron at the start of a new celebrity saturated vid which reads like a ‘who’s who?’ of 21st century superstar twits; highlights include a few quick glimpses of Kanye West that reveal a man so panicked it’s like he’s being forced to watch re-runs of his Glastonbury set while locked in an airtight vault. Tiresome, young irritant Miley Cyrus (who apparently has fallen foul to a glittery reimagining of the classic “ink on the binoculars” trick) also flips the bird and pouts like a twot.

With writing and production credits going to Madonna, Diplo and British electronic musician Sophie, along with additional writers including MoZella, Toby Gad, Ariel Rechtshaid and Nicky Minaj, the list of contributors is so vast that Mel Gibson is actually considering it as the inspiration for his next biblical epic. Unfortunately, it’s a definite too-many-cooks scenario as this musical horse designed by committee makes for a tone-deaf, attention seeking pop camel.

Frank Carter And The Rattlesnakes – ‘Juggernaut’

Frank Carter is an angry man and he’s got the tattoos to prove it. Is he as angry as someone who has forked over fifty pence for a packet of Frazzles only for it to be rendered unobtainable as it agonisingly lies trapped betwixt hook and glass inside a vending machine? No, angrier. Is he as angry as someone who returns home to see that some inconsiderate hoon has thrown glass into their plastic recycling and thus invalidated their green bin in the eyes of the collectors? Well, yes, quite possibly.

On a bed of searing, heavy metal drums and guitars, ‘Juggernaut’ is a chaotic noise of rage and confusion delivered by the larynx-shredding vocals of the former Gallows frontman. Carter is so filled with vexation that it all has the feel of the musical equivalent of a WWE wrestler attempting to psyche out an upcoming opponent by shouting at the camera with as much dramatic incoherence as possible.