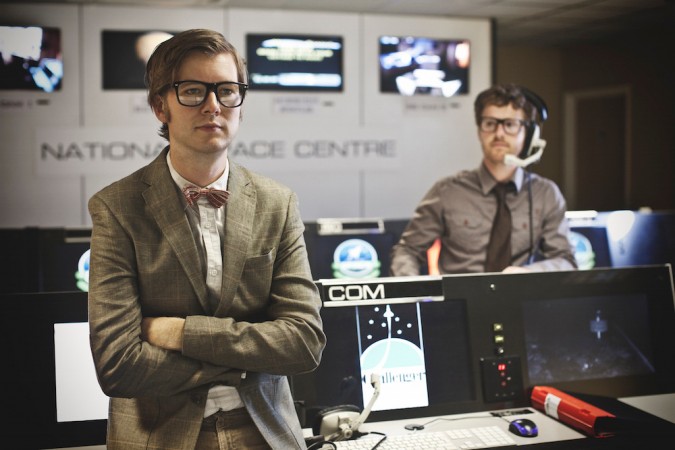 Public Service Broadcasting – ‘The Other Side’

With their use of archive samples and narrations atop surging indie rock soundscapes, the London based history fetishists are one of the most novel musical acts around. Although perhaps the word “unique” should be employed considering that the word “novel” and by extension “novelty” conjures up images of all manner of musical crimes. We’re not talking six grown men rocking out while dressed up as furry, litter obsessed mascots here. Nor are we talking sitcom characters doing Joe Dolce or alleged paedos titting about with wobbleboards.

Yes, “unique” along with “innovative” and “brilliant” are much more fitting words to use when describing what Public Service Broadcasting do. Utilising the gradual build of synths and the voiceover of Mission Control during the Apollo 8 mission in December 1968, ‘The Other Side’ effectively evokes the suspense of the spacecraft losing contact with Houston before waking up in a gale of euphoric synthesisers at the re-emergence of astronaut Jim Lovell’s voice.

I can’t figure out whether or not Messrs Fekky and Skepta are harbouring a new found ambivalence towards materialism but apparently they’ve come to the conclusion that everything is just way too much. The money on their minds? “Way too much”. The girl to their left? “Way too much”. Even the drink in their plastic Slush Puppy cups is viewed as a needless excess – a simple pleasure that the boys really should afford themselves…unless they are decadently guzzling ambergris like a pair of thirsty sea beasts.

With the bubbling intro of some cheesy synths lines, one’s ears are braced for a Freeez-esque blast of electro pop before Big Fekky and Skepta kick in with some often indecipherable rap bleating: “You can tell your girlfriend to stay out my DS, might catch me in the BM with your BF” is frankly baffling for anyone without a fourteen year old girl’s grasp of text slang although apparently “I could do it in black/do it in white” expresses Fekky’s liberal outlook on coffee consumption.

No, not a cover of that operatic number Freddie Mercury once performed with that fat Spanish bird but the sixth single to be released from the 22-year-old-white-chap-with-pipes-like-a-black-delta-bluesman’s 2014 album Wanted on Voyage. It seems to me that releasing six singles from a solitary album is something that wouldn’t have happened a few years ago; surely it’s a sign that no one really listens to albums anymore and that they’re somewhat passe – like Mini-Milks, communicating by landline or the furious onanistic tribulations of the Ten Minute Freeview.

Though titled ‘Barcelona’, the camera eventually pans into jumbo voiced George playing guitar deep inside a rainforest and it’s clear that this is not being filmed in Catalonia. Frankly that’s misleading – if Sting sang about an ‘Englishman in New York’ while sauntering around the streets of Basildon or ZZ Top about Las Vegas while surrounded by famished African villagers, it would be rather incongruous. And in the latter case, probably quite insulting.