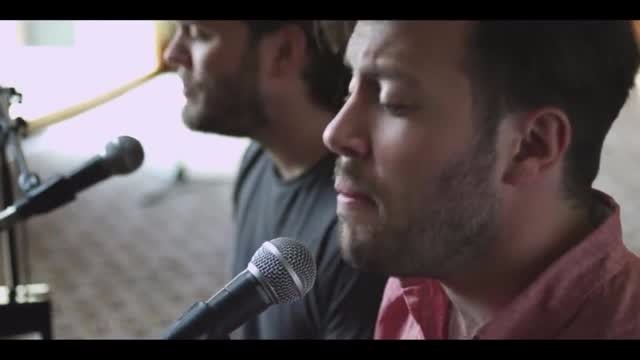 This might just be me, but isn’t there something incredibly cringeworthy about two men sharing a piano, singing over-sincerely about being what is essentially a human boomerang. “I keep coming back to you baby”, croon Glaswegians Callum and Stewart from Prides, occasionally staring into the distance as their eyes water in order to convey just how heartfelt this little song is.

Before making this video there will have been a point where two pianos were being set up – you know, one for each musician – and some overzealous PR knob said “heyyy guys, I think it would just look so profound if you shared one piano. Then, to ramp up the homoeroticism maybe you could undo the top three buttons of your shirt and wet your hair a bit so that it looks like you’ve literally just stopped fucking on top of the Steinway? And then make sure you close your eyes when you sing – everyone knows that singing with your eyes open betrays a lack of earnestness.”

Honestly, what a load of bollocks.

Right, now I’ve managed to get those two bollocks off my chest we can move on to something with a bit more heft. It’s been fantastic to see the rise of Bristol’s Dr Meaker this year, and they’ve followed up the runaway success of previous single ‘Freaks’ with another solid effort, ‘Good Fight’. Accompanying said single is a video which plays on the kind of low-level criminality which is stereotypically soundtracked by Drum ‘n’ Bass bangers.

We see anti-heroes Daz and Buster loitering with intent, riding their Trackie Bs well below regulation waistlines and nicking Double Deckers from their local cornershop. However, on the introduction of a woman (mother? sister? girlfriend?) the black-and-white nature of their lawlessness becomes a bit more muddied and grey. This whole time, they’ve been aiding her terminal halitosis by stealing bottles of Crest mouthwash from the offie. Their final, daring heist is disrupted by the overzealous shopkeeper, who locks the duo in a broom cupboard. Their failure to get the mouthwash home in time leaves the mysterious woman in a deathly sprawl in her bedchamber.

I think that’s a lesson we can all learn from.

The best thing about this upbeat ditty from mysterious dance producers L’Tric is the accompanying remix facility, a function on their website which allows budding bedroom DJs to joyfully recreate their own versions of ‘This Feeling’. Now the sagacious lyrics on offer – “sadness”, “grey” and my personal favourite “no” – can be fiddled with and played in any order you like! The whole world of songwriting has been turned upside down, and now the listener can decide whether to hear “no sadness, no grey” or “grey no sadness no” or any other combination. The only thing that can make it better is playing it alongside Buffy’s Swearing Keyboard for that extra element of profanity.

Anyway, back to the video, and ‘This Feeling’ seems to be on a mission to show up middle aged fatties for the laughing stocks they are. A super-fly young lad starts blaring out the track from his super-fly stereo, only for Ted Robbins to emerge from his chalet and start bumping and grinding to the tunes on offer. As if!! Take a hike granddad!!! In a wicked twist, however, it turns out that Teddy can shake his booty a hell of a lot better than the losers around him – in fact, he gyrates to such an extent that his head explodes in a shower of rainbows like in one of those Skittles ads.

The video takes a sour turn at the end as Ted instructs the young lad: “don’t tell your mother about this”, a truly haunting sentiment in these post-Yewtree days.