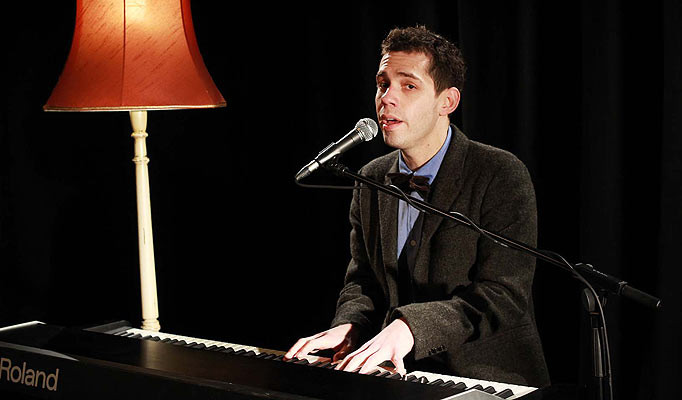 Julian Velard – ‘The Night Ed Sheeran Slept On My Couch’

As with the recent news headline “British Prime Minister Once Used His Johnson as a Makeshift Swine Thermometer”, the title of Julian Velard’s new single cannot fail to catch the eye of its beholder. A whimsical, novelty song counteracted by the earnest romance of its Wurlitzer keyboard sound, a straight-faced Velard regales us with the story of when the red-haired scoundrel once kipped overnight on his settee.

Though one would assume that the song was not conceived from personal experience, reliable sources suggest that Velard’s sofa, in a scenario not too dissimilar to the Chucky doll in Child’s Play, was inhabited by the spirit of legendary ginge Alan Ball. The short and squeaky former footballer has imbued the sofa with mystical powers whereby any ginger slumbering on it for just a solitary night will, despite a lack of any discernible talent, succeed in a career of their choosing. Former couch dwellers include Geri Halliwell, Mick Hucknell and Chris Evans.

The enduring memory of Joss Stone for many people will be her bizarre, evangelical tirade of support for a drug addled Robbie Williams at the 2007 Brit Awards – a year, lest we forget, in which she showed a blasé regard for chronology when she decided to call her third album Introducing Joss Stone. One can only speculate as to how many Woodpecker Ciders the Devonian singer had on board that night but, in what is now called “doing an Alex Turner”, she went all American on our asses. From sounding like Jethro to Jacko within a relative blinking of the eye.

With Stone’s new single ‘Molly Town’ being an unremitting venture into reggae, one would fear a throwback to the identity problems and bad impressions of yore. However, with Damian Marley on board as co-writer and co-producer for latest album Water for Your Soul, there’s a considerable feel of authenticity and Stone’s voice sits comfortably enough among the chopping guitar rhythms and pattering bass grooves.

Any video that begins with oddball magician Paul Daniels hosting a fictitious game show called ‘Don’t Like Yours Much’ is alright by me. Kicking in at the point where the magical man-goblin attempts to deliver a humdinger of a punchline about his wife being a good golf caddy, ‘Namaste’ is a quirky piece of dream pop within which one can hear curious echoes of Erasure’s 1986 hit ‘Sometimes’. That’s probably not a good thing but at least the Brummie indie popsters have opted not to utilise Andy Bell’s approach of dancing around in a tight T-Shirt while being doused in simulated rainfall.

Clearly, who needs rain soaked homoeroticism when you’ve got Paul Daniels in your video? When he’s not being a bastard by declaring his lack of sympathy for the homeless because he and Peter Stringfellow “got off our arses and grafted” or issuing denials of climate change, Daniels is quite obviously a gifted comic performer. Like a young Buster Keaton or something. But with better card tricks.