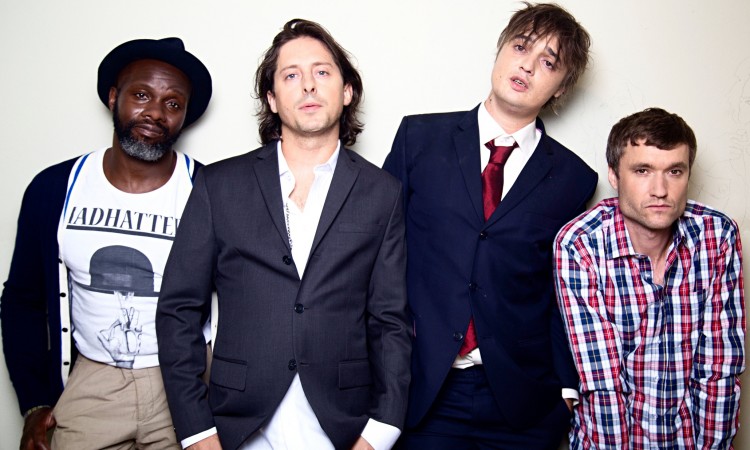 The Libertines – ‘Heart of the Matter’

Surprisingly hard hitting for a promotional vid, The Libertines are back with the most macabre music video since a luminously pale Michael Jackson canoodled with charlatan wife Lisa Marie Presley while having little more than a large rag covering his translucent genitals (see ‘You Are Not Alone’). We see Pete Doherty and Carl Barat violently force their chair bound doppelgangers to ingest drugs, via pipes, powders and needles, as fascinated punters watch on in some ghoulish take on an Amsterdam peep show.

Featuring merciless laments on their perceived former standing as hard-done-by miserabilists, the lyrics mirror the visual self-flagellation on display while the dark, garage rock guitar chords and spindly chorus riff deliver something gloomily melodic. Elsewhere in the video, Barat does a slightly OTT “Hacksaw” Jim Duggan impersonation by going mental with a block of timber while bassist John Hassell displays a quiet, sullenness that somehow never seems to elude him; it’s a disposition he employs for videos and concerts… and most probably for attendance at comedy shows and the point of sexual climax.

The title track from his newly released sophomore album Sugar, the Teutonic DJ and house producer’s new single features the vocals of a Canadian youngling by the name of Francesco Yates. Sporting an impressive barnett that makes Kevin Keegan’s 1980s bubble perm seem positively conservative, Yates looks like a curious cross between antique boffin James Harries and a haunted doll. Or perhaps that doll of George Constanza’s mother in Seinfeld made flesh and zapped with a few thousand volts of hair-raising electricity.

As with much of his previous work, Schultz utilises a repeating guitar riff that drives the song forward amongst the floating synths and synthetic beats. The video also features a police officer (played by Tobias from Arrested Development’s slightly berserk cousin) who disregards traffic safety by dancing like a loon at the wheel, taking out a myriad of wheelie bins and impressively crashing into a 25 foot high advertising hoarding for a car wash.

Like drinking of the warm remnants of last night’s lager for breakfast, another series of Last of the Summer Wine or having Eamonn Holmes popping round for Sunday lunch, another Bryan Adams single is a somewhat superfluous notion that no one in their right mind would consider desirable. But here we are with the second single to be taken from Adams’ recently released thirteenth studio album, Get Up!

The intro to ‘Brand New Day’ seems to echo the D to A chord pattern of ‘Summer of ‘69’ and, as could’ve been expected, we are left with some inoffensive but ultimately middle-of-the-road, soft rock. Plus, there’s a slightly iffy rhyming of “go” with “Ontario”. The video features actress Helena Bonham-Carter and some dude sporting a fetching combo of wife beater vest and high waistband – he looks pensive, she rolls around on the floor and pirouettes with a gratuitous amount of cloth, they nearly have a wrestle. Nowt much happens, really. In many ways an apposite video, then.