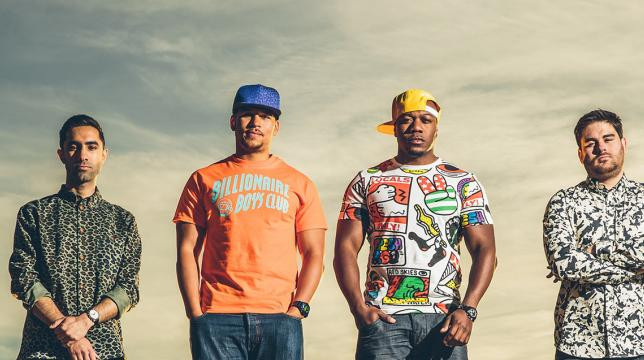 ‘Rumour Mill’ is the fourth single to be taken from British drum and bass outfit’s 2015 album We the Generation, a record that features an eclectic series of appearances and collaborations from the likes of Ed Sheeran, Lianne La Havas, Dizzee Rascal, Bobby Womack and former Robot Wars commentator Johnathan Pearce. Though six of the album’s songs feature the voices of either Heard or Anne-Marie, this is the only track where they both contribute vocals and thus they appear together in a pretty pointless vid where they each occupy the front seats of a parked BMW.

With no apparent intention of driving away in their soft-top Beamer, one wonders why the hell Heard and Anne-Marie are fannying about while parked in a deserted multi-storey. Theories include that Heard – erotically charged by the near incestuous scene in the original Back to the Future movie – was under the impression that “parking” for long enough would result in some sort of taboo laden smooch. Or perhaps, so irked he was at having forked out for 3-4 hours of parking for an errand that only took a couple of hours, that he was merely sticking it to those robbing NCP bastards and getting the most out of his £12.75.

Ronan Keating – ‘Let Me Love You’

To the collective sigh of nation, and in news only slightly less exciting than the prospect of a 6 hour lecture by Michael Owen about the concise history of Cornish slate mines, that bloke from Boyzone is back with a new single from his tenth (yeah, I know) studio album Time of My Life. After breaking into the acting world with his appearance in 3D animated epic Postman Pat: The Movie, the Ivor Novello winning songwriter (yeah, I know) is unfortunately back to what he does worst.

Due to the Irishman’s bizarre insistence on only ever attempting to gauge the time of day via a mental estimation of the sun’s coordinates, the video sees the dilatory Dubliner arriving late once again for an afternoon rendezvous with his band. But can it be that Keating is carrying a guitar? Indeed it can. However, though he starts strumming away like an overzealous chimp in a Viagra factory, it doesn’t seem to have anything to do with what we’re hearing. Has Keating been deceived with the world’s first soundless guitar? It’s akin to an open-mouthed toddler believing that he’s tearing it up on Super Mario while all the adults in the room know full well that the controller’s out of juice and the game’s in demo mode.

The last time we featured a single by the Los Angeles based pop singer, twas a video spinning a rather dramatic tale of maximum security prisons, double-crossings, evasions of police capture and some of the most stimulating all female fight scenes since the infamous Pat Butcher/Peggy Mitchell slap brawl of ’08. However, there are no Robert Rodriguez directed mini epics this time and ‘Stone Cold’ is a relatively austere visual affair as Lovato delivers an emotive piano ballad recounting end of relationship heartbreak.

And it’s a heartbreak that seems to be taking its toll on Lovato; signs of her rapid descent into lunacy are immediately apparent when we realise she has jumped into the bath fully clothed. We also see her perambulating aimlessly around snow covered hillsides while donning a large hooded gown. It’s like something out of a Scottish Widows advert, only a bit colder. Actually, if you don’t pay too much attention to all the angst going on, you only tend to notice that Lovato is singing “Stone Cold” repeatedly while either walking in snow or submerged in bath water; thus it ends up coming across as half an ode to the British penchant for captious weather chat and half a diva-like complaint that her bath water could be rather more temperate.