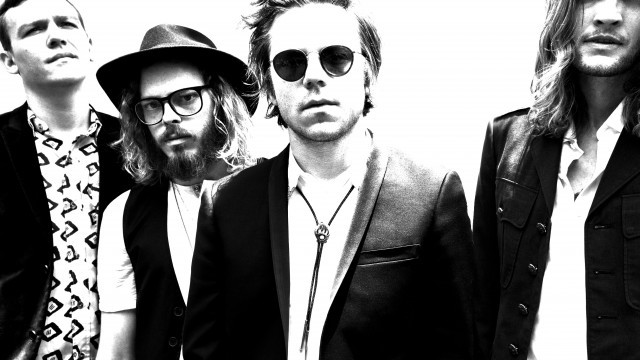 The video features footage of the band on tour in England where the four chaps gallivant around our green and pleasant land experiencing the best that British culture has to offer: squeezing together inside one of those red, old fashioned phone boxes, soaking up the drizzle while sat in a muddy field, getting a lung full of cow dung while perambulating the British countryside and the rather less known English pastime of jousting each other with butter knives. There’s also time for a visit to Liverpool where one of the band starts getting jiggy with the statue of John Lennon on Matthew Street – frankly the biggest insult to The Beatles’ legacy since Ozzy Osbourne squatted down and laid a steaming Brummie turd all over ‘In My Life’ in 2005.

It appears that television – mainly in the form of cheesy soap fodder Neighbours and the Crocodile Dundee movies – has lied to me; judging from the Sydney born singer’s proclivity to rap in the authentic style of Southern US hippity hop, not all antipodeans are schooner swilling, crocodile hunting, shrimp loving suburbanites with a confusion over the real meaning of the word “spunk.” Taken from upcoming album Digital Distortion, ‘Team’ lyrically focuses on self-confidence (“Baby I got me, and that’s all I need, only friend I need,”) and a reference to sharp shooting former NBA star Reggie Miller that will baffle the fourteen year old minds of her fans.

The video begins with Iggy legging it away from some kind of institution – chased by men in white coats and, inexplicably, female tennis players – before performing donuts in a slick, expensive looking sports car in a way that would have Jeremy Clarkson spoiling his long johns. Elsewhere, lax airport security allows her through customs unchecked with platform shoes so big that, in the hands (or on the feet) of someone with the ingenuity of a Richard Reid, the Lockerbie bombing could be made to look like an octogenarian expelling a wet fart aboard a crop duster.

Rod Stewart – ‘Walking in the Sunshine’

When he wasn’t striding around in ludicrous figure-hugging stage outfits or beseeching compliments as to his own sexiness, Rod Stewart has very much had his moments as a songwriter: His first two Number one hits ‘Maggie May’ and ‘You Wear It Well’ are standout tunes while 1976’s ‘The Killing of Georgie’ has to be the best song about the battering of an innocent homosexual in recent memory. Still going strong at the age of 71, the former philanderer has now released close to as many songs as times he’s embarked on games of ‘hide the sausage’ with his decade spanning plethora of leggie blondes.

This new single is taken from the evergreen singer’s 29th studio album Another Country, released last October and peaking at numbers 2 and 20 on the UK and US Billboard album charts respectively. And I have no idea what’s going on with this vid; I can only assume that this is not actually the song’s official video – unless Stewart is getting all avant-garde on our ass and playing with the expectations of the audience via some sort of leftfield venture into bizarre post-modernism? It’s surely a natural evolution for a man who used to romp around in leopard print leggings.