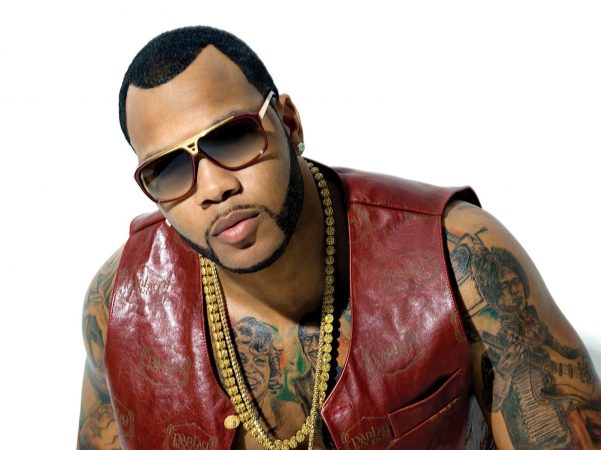 After a laborious working week of being fellated by groupies, smoking weed and composing half-baked lyrical scribblings about how much money he has, the weekend really can’t come soon enough for overworked hip-hop sensation Flo Rida. In fact, he loves the spondulicks so much that ‘Hello Friday’ manages to rhyme the word “money” with (ahem) “money”. With the lyrics repeatedly taking us through each day of the week, there’s also a bit of a Sesame Street vibe going on; while the presence of either Mr Snuffleupagus or the Cookie Monster wouldn’t go amiss, Flo has instead disappointingly called upon the services of r&b star Jason Derulo.

The video features rubbish tattoos and haircuts paying homage to the song’s title (things that six days out of seven will just seem sadly optimistic), Flo cavorting with a succession of amply bosomed female types and the ultimate in start-of-the-weekend hedonism when his gang pop in for a quiet meal at a TGI Fridays. Elsewhere, listen out for an utterly nonsensical rhyming of “nookie” with “Oreo cookie”.

Two things emerge from the official Welsh anthem for this summer’s Euro 2016: firstly, further confirmation that it’s damned near impossible to record a football song that doesn’t make you want to take a bread knife to your own head and do “a Van Gogh” on both ears; secondly, the disproportionate sense of melodrama shared by football obsessives the world over. Whether its delinquent goons whacking the bejesus out of each other over a mere accident of geography or the Manics singing earnestly here about “tragedy” and “heartbreak”, the Beautiful Game is always likely to give birth to emotions a little lacking in perspective.

Thus, it plays like an overly serious lament of the fact that Wales hadn’t qualified for a major tournament since 1958 and the impending hope for a nation now that they have. It’s rather mawkish and a little daft; there are cheesy lyrical references to current players and libidinous former wing-man Ryan Giggs, plus a mention of the late Gary Speed who may be “looking down” from the heavens. The video features moments that rocked Welsh football – who can forget Paul Bodin’s infamous penalty miss against Romania in 1993 or the Joe Jordan handball controversy in 1977? Nope, me neither.

The first thing I thought at the start of the London electronic duo’s video for their new single is just how much the guys have changed since their 80/90s pomp. Hey, if Michael Jackson can make the transition from afro-sporting black child to elderly white lady, then what’s stopping Tennant and Lowe from transmogrifying into Hispanic looking gang-banging types from San Diego? However, keen-eyed viewers will soon notice that the gentlemen in the video are indeed not the Pet Shop Boys but hired hands acting their part in this stylish five minute narrative.

The video’s central character is released from prison but he’s soon yearning for the halcyon days of showering with the somodites when he returns home to unpaid bills, financial ruin and a rather unwelcoming missus. Pushed to desperation, he applies for a job at a fast food joint but is instantly rejected – supposedly due to his being a twat with a partially tattooed goatee beard, his own inked initials under his right eye and that silly lightning bolt thing on the side of his bonce. Furious at this ignominious rebuff, he grabs a revolver, goes back to selling drugs on the street, makes a shit load of wad and lives happily ever after.

Oh, hold on – he actually does get arrested again; thus we are spared a pretty dubious message for da yoot.