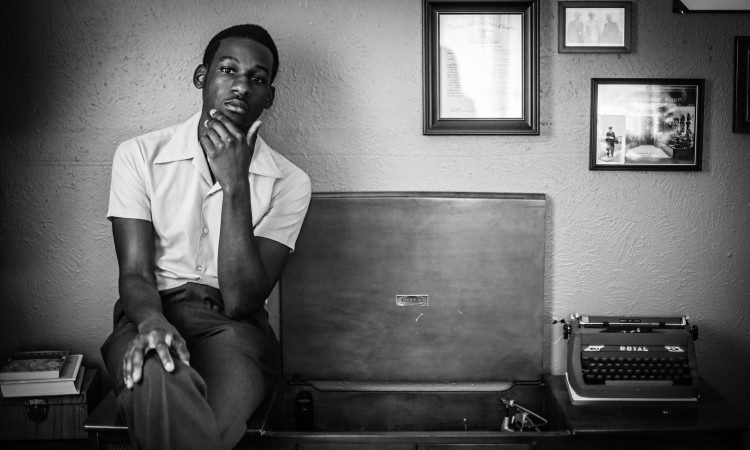 With February single ‘Coming Home’ going virally ballistic on the interweb, this year has seen throwback ’60s soul merchant Leon Bridges emerge as one of the most hyped acts on cyberspace. Fortunately, on the strength of what we’ve heard so far, Bridges is in the rare position of being somewhat deserved of such hyperbole. The romantic ‘Better Man’ for instance is a rather attractive piece of retro, doo-wop laden soul; the focal point being Bridges’ silky smooth Sam Cooke-esque vocals. Sounding like it could’ve been recorded at Stax studios in 1965, it’s an anachronistic gem of classic soul balladry.

However, due to his recent relationship misdemeanours, the lyric “I’d swim the Mississippi River if you would give me another start” has been taken rather literally by the considerably peeved object of Bridges’ affections. A la David Walliams, he is at this moment smearing himself in goose fat and hopes to return to dry land by the time debut album Coming Home is released on 23rd June.

Gaz Coombes – ‘The Girl Who Fell To Earth’

Even though he is now without the gargantuan mutton chops of yore, this has apparently had no negative Sampson-from-The-Bible type effect on the former Supergrass frontman; in fact, considering the glowing reviews received for his latest album Matador, the neatly groomed sidies have given Mr Coombes all new access to enhanced songwriting powers. Dreamy, hypnotic and experimental, the enticingly gloomy ‘The Girl Who Fell To Earth’ is shuffled forward by delicate acoustic guitars before being subtly uplifted by the melancholy swirl of an emotive string section.

Standing proudly amongst my top one hundred artists to have ever emerged from Lebanon, Beirut-born Mika Penniman’s choices of suit in the video to ‘Talk About You’ are so garish that even Laurence Llewelyn-Bowen and Jonathan Ross would happily grapple bare-chested for the honour of wearing them. The first suit we see was expertly crafted from the national flag of Luxembourg and this sartorial catastrophe wasn’t helped when, just minutes before the shoot, too many Woodpecker ciders the night before caused him to flake out on a freshly lined penalty box at a nearby footy pitch.

Shot on the set of seminal 80s children’s television show Playbus, the part of the video where Mika’s lackeys simulate motion by holding different types of scenery and charging past his stationary BMW bubble car was actually the result of budgetary restraints following the harsh demands of the singer’s rider: Nineteen bejewelled goat’s skulls and hand delivery by a small child freshly flown over from Rwanda of every edition of Bizarre Magazine ever published. At precisely 12.32pm. He’s got that kind of clout – no wonder he’s looking so bloomin’ smug.