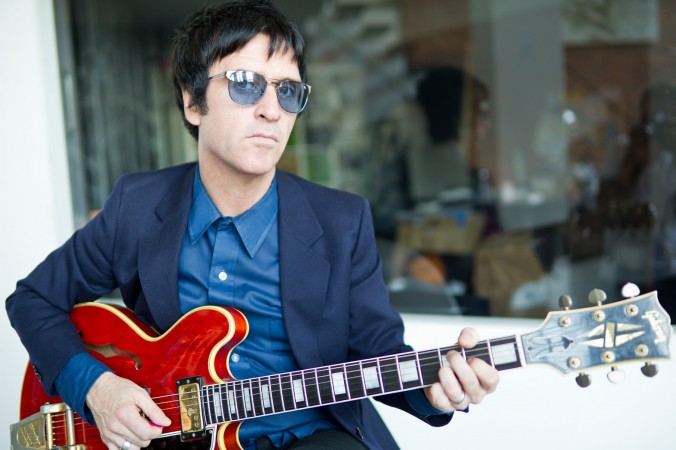 On the evidence of the video for his new single ‘Candidate’, Johnny Marr appears somewhat impervious to the passing of the years and seems to be wearing rather well. In fact, based on how old Marr looks now, a quick-fire bit of arithmetic deduces that the Mancunian guitar wizard must’ve been roughly 9 years of age when, over thirty years ago, The Smiths started releasing the seminal music that made them Britain’s definitive indie rock band. A vegan since 2005 and now tea-total, the well-preserved star has dispensed with the hangovers and taken up a fierce running schedule that, like a crepuscular Forrest Gump, has seen him pounding the pavements of cities like Osaka at five in the morning.

‘Candidate’ won’t win over those on the Morrissey side of the “who was the best in The Smiths” argument but there’s no doubting its intensity and the joy of hearing Marr’s guitar playing remains.

In the biggest show of Hubris since R Kelly sang about being ‘The World’s Greatest’, or Kanye West last gave an interview, Marshall Mathers returns with some blusterous claims about being a bit of a phenomenon. After drug problems that culminated in a methadone overdose in 2007, the Detroit rapper has since jettisoned the intoxicants but, a little like when Tiger Woods gave up the PGA Tour Poontang, the new clean cut living seems to have put Slim Shady off his stroke.

Written for the soundtrack to boxing film ‘Southpaw’ and featuring a video where the chorus’ swollen-headed sentiments annoyingly scroll across the screen in large capital letters, the song’s title is in unfortunate contradiction to its actual merits.

Back in the halcyon days of the Victorian circus, the term “freak” would perhaps apply to a woman with a beard like Brian Blessed, a man with no arms or legs who could roll a cigarette with his mouth or, at the very least, a lady who could eat a roast chicken with her feet. However, on the evidence of Krept & Konan’s new video, a “freak” nowadays is merely a female with low self-esteem gyrating her buttocks for a couple of bejeweled numbskulls.

‘Freak of the Week’ is worthy of mention because both song and video make for a glorious hybrid of unintended hilarity. Firstly some ludicrous sartorial choices; the fetching and innovative donning of sideways ski goggles and a couple of grandiose fur coats, the thought of which would see Morrissey being sick all over his lentils and which saw the massacre of approximately 48 raccoons.

Also, we have gangsta credentials – “Fuck the Feds” one of them blabs earnestly while utilising the double middle-finger salute (so we know he really means business) and a laughable lyric suggesting that a sure-fire method of impressing the ladies is the promise of being served a Maccy D’s on an aeroplane.