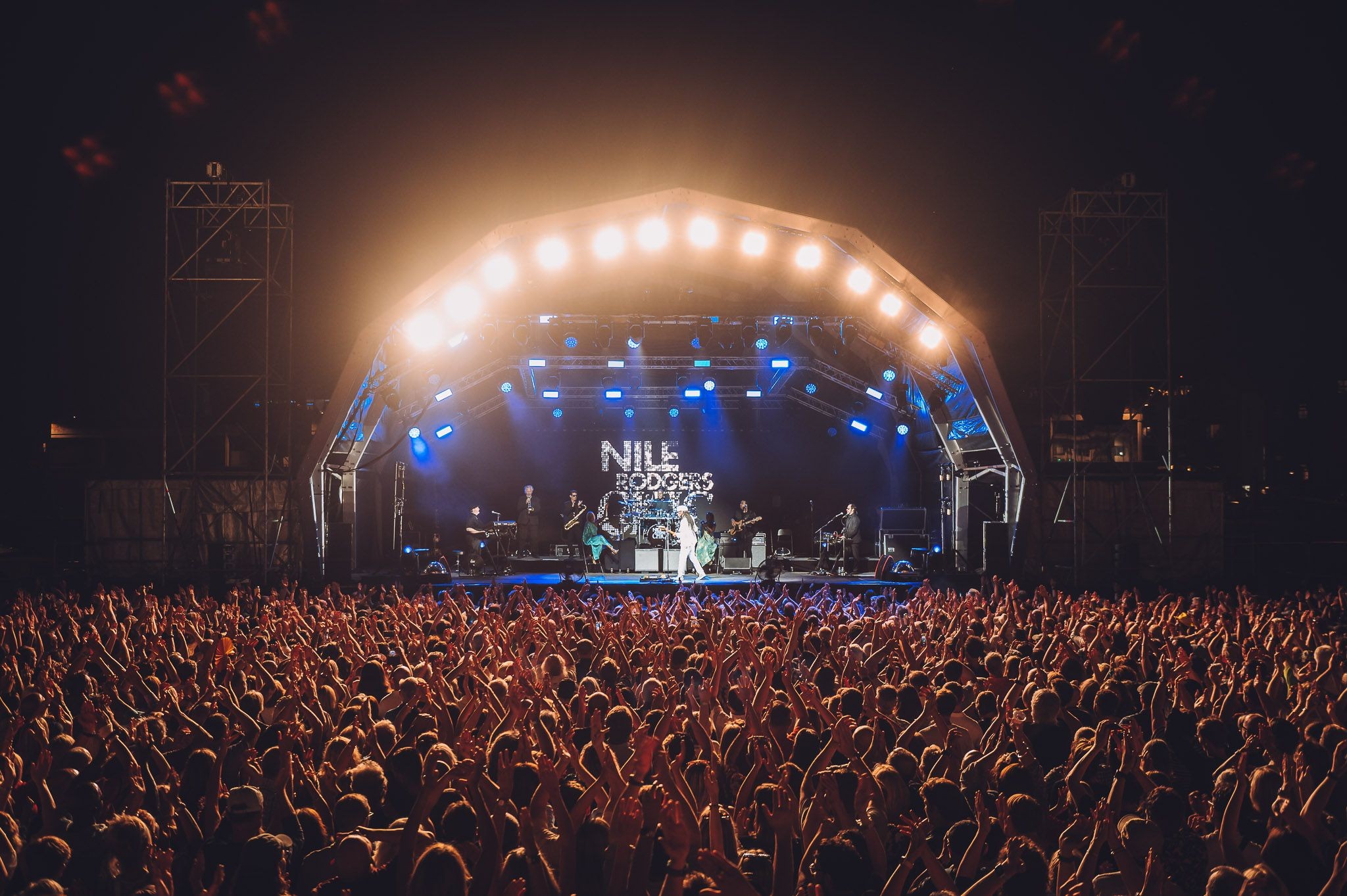 When, toward the end of tonight’s performance, Chic drummer Ralph Rolle incites the packed harbourside audience to show their appreciation for main man Nile Rodgers, he invokes a staggering statistic that, as producer and songwriter, Rodgers has had a significant hand in selling half a billion records worldwide. That’s ridiculous. Thus, this evening we are in the rare company of a genuine musical icon, an indefatigable, one-man hitmaking behemoth whose career Rolling Stone Magazine once described as “hard to fathom.”

Plaudits and musical achievements aside, nobody has the right to look as cool at 69 years of age as Nile Rodgers does; he’s dressed to the nines in a shimmering white suit and long dreadlocks hang from beneath a matching beret, sartorial choices that perfectly compliment his trusty white 1960s Stratocaster that has been dubbed ‘The Hitmaker’. He’s flanked by singers Kimberly Davis and Audrey Martells, themselves sparkling in vivid green and gold dresses, and Chic – consisting of airtight veterans on bass, drums, keyboards, saxophone and trumpet – explode into an embarrassment of high energy riches.

To start things off, there’s a seamless conjoining of Chic singles ‘Chic Cheer’, ‘Dance, Dance, Dance (Yowsah, Yowsah, Yowsah)’ and ‘Everybody Dance’, a trio of songs that ends with the curious sight of two roadies scrambling on to the stage to finally present each musician with a copy of the setlist. After the segueing trio of tunes, we settle upon ‘I Want Your Love’, whereby Davis’ gymnastic vocal finish arrives via a fine trumpet and sax interlude and a riveting slap-bass showcase from Jerry Barnes.

Rodgers then addresses the crowd for the first time proper as he declares that he’s “written and produced a lot of songs for a lot of people” before running through the gamut of artists: David Bowie, The B52s, Sister Sledge, Diana Ross, Lady Gaga, Duran Duran. This serves as intro for a sparkling Diana Ross double header as ‘I’m Coming Out’ melts away into ‘Upside Down.’ 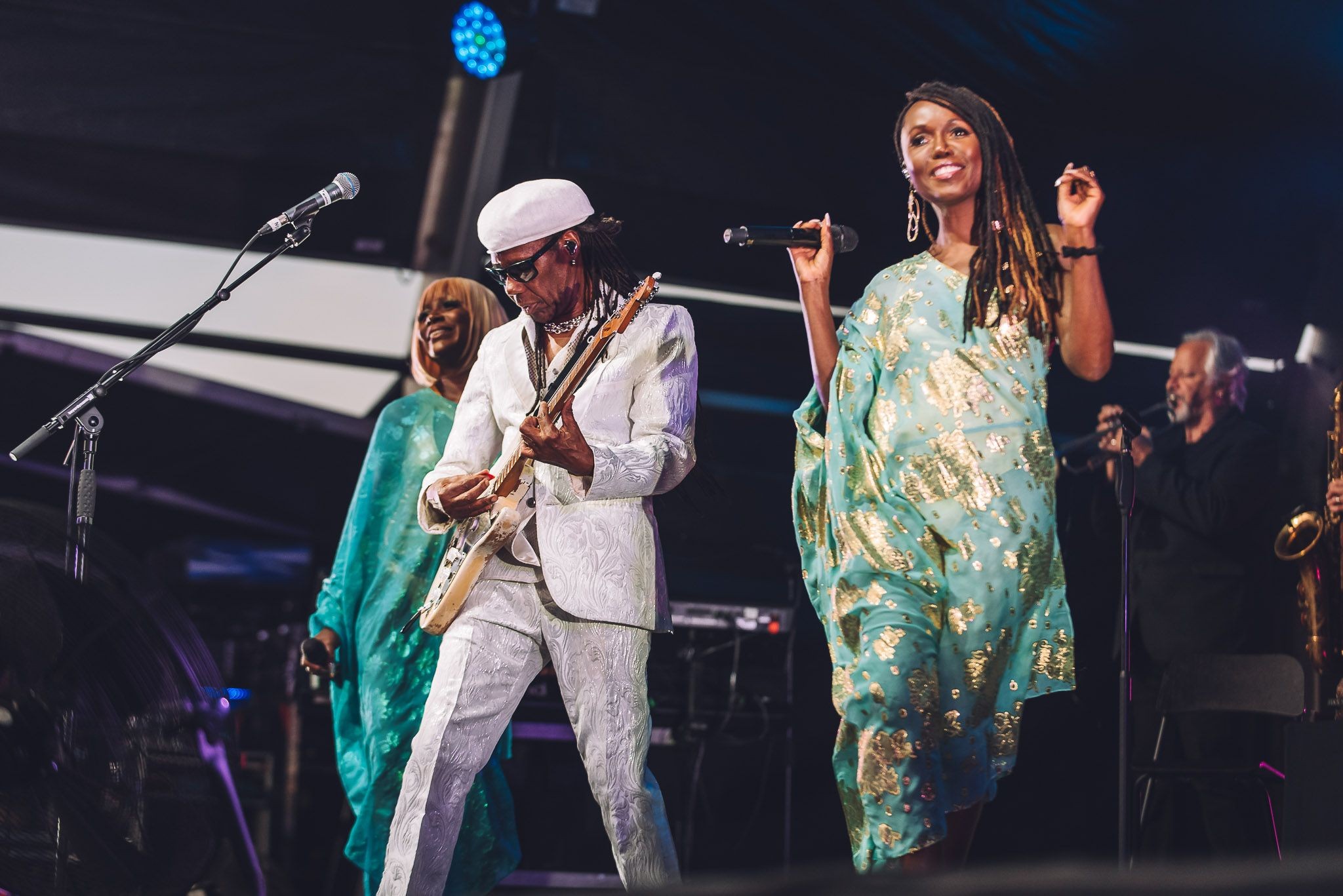 The effortlessly dynamic musicianship – another nod to Barnes’ remarkable bass playing won’t go amiss – and the well-loved familiarity with Rodgers’ danceable oeuvre is a potent recipe for guaranteed good times amidst Lloyds Amphitheatre. The audience is a consistent mass of singalongs, dancing, arm-waving and rapturous applause. The soundtrack on offer tonight is one that, without apology, encourages fun, joy and a celebration of simply being alive. While, of course, there is always room for something more reflective, heavier of theme or darker of spirit, Rodgers and Chic’s music feels utterly compatible with what a live music performance should be. Essentially, we’re all at a 10,000 person party.

It’s an evening of multiple highlights; Sister Sledge’s ‘We Are Family’ is given fine treatment with a call and response bass interlude leading into a breakdown wherein Davis’ holding notes for myriad eternities form the bridge into the song’s reprise; after Rodgers recalls his meeting with Madonna in the early 80s, there’s a hugely appreciated medley of ‘Like A Virgin’ and Material Girl’ and, after referencing his two successful battles with cancer, Daft Punk cover ‘Get Lucky’ could be the best received tune of the night.

After asserting that the night needs to reach “maximum funkosity”, Rodgers leads the crowd through a brief Freddie Mercury-esque bout of echolalia before a brilliant moment when we’re thrust into the descending intro of Bowie’s ‘Let’s Dance’. With lead vocals performed by Rolle, amidst Rodgers’ imploring the audience to ‘Jump!’, it’s a song that best exemplifies Rodgers’ cache as a significant figure in popular music.

It’s been a show powerful enough to justify the occasionally contrived showmanship in the band’s presentation. Rodgers declares tonight’s crowd as “one of the best” he’s ever played in front of (my mortgage is on him saying the same thing at the end of show number two tomorrow) and appears to feign modest surprise when Rolle takes over to big Rodgers up to the hilt during the latter’s bandmate intros. It’s no doubt a theatrical side-effect of the “Chic Organisation” being such a well-oiled entertainment machine.

But who really cares about that? ‘Good Times’ gives way to ‘Rapper’s Delight’ which then morphs back into ‘Good Times’ for a final flourish. And with that, the man with the 500 million record sales, and his wonderful bandmates, have delivered us to “maximum funkosity.”