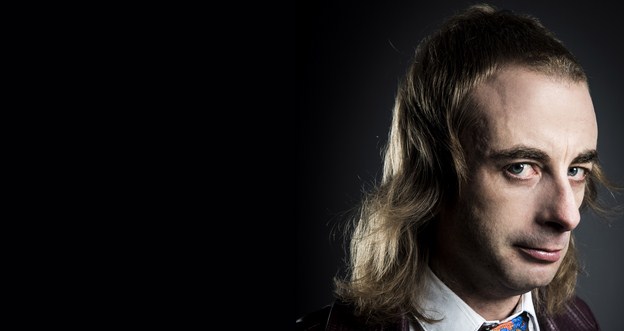 Paul Foot is a master of appearing flustered, chaotic and full of witterings. In what is in fact a finely tuned and expertly performed set, he thrusts between surreal ‘disturbances’ and ‘humours’, often breaking off into ramblings and asides, keeping the imagination of the audience (or ‘conoisseurs’ as he calls them) vivid.

The set, ‘Hovercraft Symphony in Gammon # Major’, begins with an off-stage Foot introducing himself onto the stage. With no microphone, the announcement is cut short, allowing Foot to enter The Lantern to run through a list of ideas he hasn’t put into the show, due to them being too childish. Of course, this is just a ruse, and this material is all part of the show.

When Foot gets round to the material he supposedly has put in the show, it is similarly effervescent and visually stimulating. When giving birth to a cauliflower baby he has gestated under his jumper for three weeks, he requests a male nurse, as “this is man problems”. A friend who is full of platitudes kills her husband and childhood sweetheart, and hours later states “what is done is done”. When all of her shopping starts turning into snakes, she tries to use platitudes, but they don’t work “when everything is snakes”.

It is clear why Foot has such a devoted fanbase, and frankly it is surprising he is not more widely recognised. An excellently surreal comic experience.