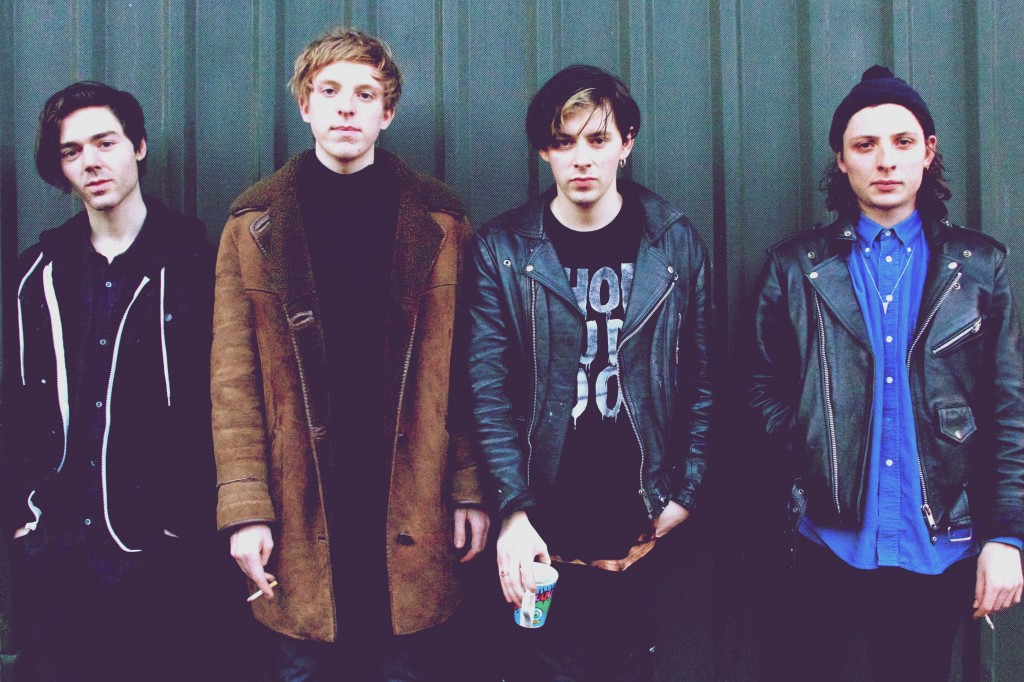 Rhys Buchanan caught up with Peace frontman Harrison Koisser to talk about the new album, the NME Awards tour, their upcoming UK tour and confetti…. Hi there Harry! How are you doing today? I’m good! What’s up?! So you’re relatively fresh off the NME Awards tour – how did it all go? It was one big barrel of laughs, just a classic bunch of lads on a big tour really… It was like one of those old 50’s tours where they have four bands rolling around the country. Very enjoyable for all! Palma Violets, Peace, Miles Kane and Django Django; were there any antics? There was quite a few! I can’t remember much… but yeah there was a lot of tom-foolery on the tour and plenty of big nights out! Congratulations on completing the album! It’s sounding great, you must be very proud of the result? It’s all of our favourite songs really. When we signed with Columbia we decided that we wanted to make songs which were honest and not hiding behind any production or overly trendy metaphors. I wanted to write songs that people can connect with… I think we’ve pulled it off and it’s a really strong first album. The new album also features a few tracks from EP ‘Delicious‘… it’s interesting you left off “Bloodshake”, tell us about the decision? “Bloodshake“ felt like it had past it’s time. It really stood out from the EP, so we thought maybe that’s a good place to leave it. It feels weird putting tracks from the EP onto the album because EP ‘Delicious’ was much bigger than we ever thought it was going to be. Loads of people got it! We thought it was going to be quite a rare thing but then it spread faster and bigger than we thought. When we were making ‘In Love‘ it almost felt like we were recording our second album because the EP was so successful, we thought it wasn’t necessary to put “Bloodshake” on. We thought it would be better to include a new song instead. It sounds like the success of EP ‘Delicious’ came as a big shock to you all? It was a terrible shock because we thought it was going to be a really small thing, like maybe around a couple of hundred people would buy it but then it just got so big! That really long track at the end, “1998“, we thought people would turn off at that point but everyone really loved it! It came as a great surprise. So the album has it’s emotional moments. “Float Forever” is my favourite! It gives me the goosebumps… what’s the track all about?  It’s like the sad song on the album isn’t it? Yeah… I can remember it was really late and I was sat on a bridge near Birmingham when I wrote that chorus. I can’t remember where I was on the way back from and I can’t really remember what I was upset about but it is a really emotional song. Also “California Daze“ is the other emotional ballad on there… Yeah, I really like the slower ones. They are not harder to write, but it’s harder to pull off a slow honest song because some people might feel uncomfortable going to that level of honesty. But if you want something to have substance and feel real I guess it has to be about yourself, it’s never really felt awkward for me to go to that level when writing. Those slower ones contrast really nicely alongside the more upbeat psychedelic tribal tracks on there, what would you say gives Peace such an all out range of styles? I think it’s just us, we’ve all got really diverse music tastes and our idea of the Peace was to have no idea of what the band is and just to make whatever music we wanted to regardless of genre. Not to be a psychedelic band, not to be an 80’s revival band. We all decided we are going to do whatever the fuck we want to. This is what gives the album so many styles. So would you say genres tie you down? Well they’re useful if you want to be a band of a certain genre. You kind of need it because you’ve got something there to do. But for us it’s different. I think someone from Columbia, right before they found us, said: “We like how you have no respect for genre”, and I was like: “yeah it’s never been an issue.” I have always had a really diverse music taste so I don’t see why the music I write should be limited by genre. The album is also going to be released on vinyl, what value does the format hold for you? Me and my dad used to have loads of records. To be fair our record player was broken through most of my teenage years so CDs did dominate more but I was always liked us putting on records. We’ve always supported the idea of vinyl. It’s the most physical format, there’s something quite magical that simply grooves in a piece of plastic can make the sound. I’m a fan of it! Also records are physically the largest format, so you hold it and it’s right there in front of your face. It makes total sense. 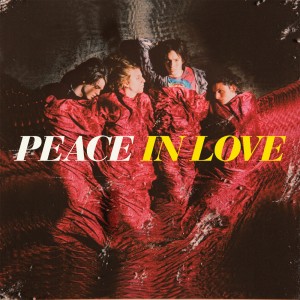 It is quite magical, obviously one of the most significant events on the calendar for independent music stores is Record Store Day, which I believe is in April this year. Will Peace be partaking?  We were actually having a discussion this morning with our management about it! Because we have so many ideas and we were just discussing which one to do. Jack White is leading the way for vinyl… I mean what’s he doing now, putting blood into them or something? I don’t know! He’s on it! He’s got it! aha, I want to do more. I heard once he put the albums into balloons and let them go! That was how people got them… Really!? That’s amazing! They must be worth a lot of money! That’s the only thing that’s annoying with Record Store Day, people buy the limited edition records then sell them online for ridiculous amounts online. It really defeats the point! Maybe we should sell our records only in person where you have to come and meet us to prove that you want it… Maybe on the tour or something? Yeah, that’d be cool! The UK tour is very soon! I can’t wait. When do rehearsals start?  We have a few rehearsals before we head off to America briefly, then we’re gonna do some when we get back. We have nothing else to do so I think we will be rehearsing in all of our spare time. Can we expect confetti? I fucking hope so! It’s a shame every show that we can’t get the confetti out! I love confetti, I have been obsessed with it all my life! Ever since I went to a wedding when I was very very young and they were chucking it around and I was like this is insane! This is so fun! As soon as we were playing live I was like: “we need to get the confetti out!” Even in empty venues when there was nobody in the audience we were setting off these confetti cannons! It was great! And how about watermelons? Will they be available on the tour? I think we should carry them around in the back of the van. We had to do it for a video shoot once, they go off pretty quickly though! We had like sixty watermelons rotting in the back of our van. It was horrible! Is the setlist for the tour likely to consist of the whole new album?  I guess it will feature most of it but I would like to include some older stuff but it will have the majority of ‘In Love’. At the London shows we might consider doing a cover with our friends who’ll be supporting us. Listening to the album has really got me excited for the summer! Is it strange for me to think of Peace as a summery band? Well the album was written over the last few years. We recorded it right at the end of summer just as it was starting to get cold going into winter, so I have always thought of the songs as being really wintery. But then when it started to get sunny I was listening to it and was like: “Oh my god!’ it is really summery!”, but i’ve always thought of the album as being really wintery, it’s really weird… maybe it’s omni seasonal? Haha! I think it’s good that it’s summery because everyone is just willing for the sun to arrive at the moment. Speaking of the summer, Peace have been confirmed for a few festivals now but is there any news on Glastonbury? Yes! Urm obviously! I don’t think it’s been confirmed but we’ve been in talks. I’m positive we’ll be there one way or another. I’m hoping we can get it all sorted out because it’s a fantastic festival. Are you abit of a festival-goer yourself then? I went to so many festivals, not last year, but the year before. I went to as many as I possibly could. I actually broke into Glastonbury Festival that year because there were no tickets left! Were you successful? Haha! Yeah I blagged my way in through getting different passes from friends and sneaking around a bit! I spent the night in Pennard’s Orchard I think. 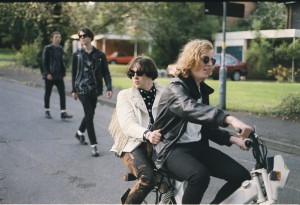 I think people try parachuting in these days… though it isn’t too discrete is it? No it’s not that discrete! I might try that… It would be quite a good entrance! I’m up for it! Now is a very exciting time for new music. What are you into at the moment? New music wise… I love the bands that we hang around and play with like Temples, Wolf Alice, O Children, Swim Deep, Splash… we’re all part of the same thing. I went to see The Strypes the other day and I was really into them! They reminded me of a high school band but they were just really decent! Thanks so much for you’re time Harry, it’s been great! I’m sure I’ll see you at the Bristol gig! Awesome! Alright yeah I’ll see you there! Catch you in a bit! Peace’s debut album ‘In Love’ is released on Monday 25th March. The band will also be performing at The Fleece in Bristol on Monday 22nd April. To find out more about this and the band in general visit their official website www.peaceforeverever.com
Follow @Thefixmag
Recent Posts
We Like You…