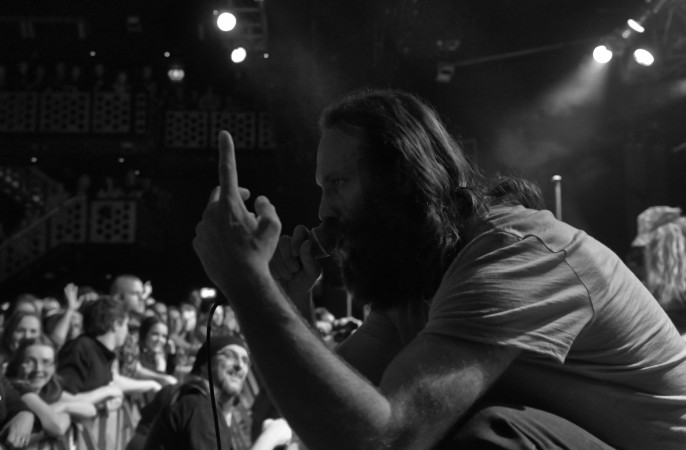 New material, new guitarist and a new tour marked the start of a new era for Reef, rock legends here in the south west and when they graced the stage at O2 Academy Bristol the Somerset lads and their adopted brother made it a night to remember on this localish leg of their tour. Packed to the rafters with punters ready for that head banging rock out that Gary Stringer promised when he spoke to The Fix, the place exploded from the off with the frontman on form.

Early doors and a beautiful performance of “Consideration” stood out and along with the energetic “Stone For Your Love” and “Come Back Brighter” that would have provided all the nostalgia the loyal following could have asked for. They were in their element. There was a warm tone to the evening and Stringer basked in the reaction – “Can we play here every month?” he shouted down the microphone to rapturous applause.

The aforementioned “Consideration” particularly saw the crowd in fine voice as the first real singalong sparked as audience members fed off Stringer’s passion and joined him as the climax built. Singing along with the lyrics, ‘It’s gonna be alright, it’s gonna be alright’ seemed to warm everyone up nicely for what was to come as the frontman commended the crowd for “being like the backing singers” before the opening to “Place Your Hands” kicked in. The place erupted and the energy went to a new level – it even sparked dance offs. When Stringer left it to the crowd and encouraged them to get louder in his place they obliged.

By this point, Reef had the crowd where they wanted and these very laid back, chilled out entertainers (none more so than Jack Bessant rocking out barefoot) seemed to revel in the excitement; most fans would say there hasn’t been enough Reef activity over the last ten years and were loving every moment of seeing the night’s idols. It was tight and professional from experienced old hands, though of course, one who wasn’t there was Kenwyn House, Reef’s long standing guitarist. In a beautiful moment in which Gary Stringer asked for a warm Somerset welcome to House’s replacement, Jesse Wood, who he said, “helped us out of a tight spot,” he then also spoke of how he wishes Kenwyn all the best.

“We’re writing music again and it’s a good vibe,” the frontman continued and a small selection was thrown out to the fans on the night. A slower number, “First Mistake,” was the pick of the new material and showed Stringer’s strength as a vocalist; this was never in doubt for me having seen him with the comparably mellow StringerBessant. In his interview with The Fix ahead of the gig, Stringer mentioned that the reaction to new material makes a big difference when deciding on the track listing for an album. He went on to speak about how seeing audience members eyes glaze over would lead to them being thrown out of the melting point, but quite frankly, with each track receiving a positive response it may well be a hard choice when confirming that next running order. “Lone Rider,” which saw the start of a run of tracks with Stringer also on guitar, also looks to be a future classic along with the punchier, ballsy opener for the night, which I don’t believe the frontman introduced and thus remains unknown (to me at least).

Chants of ‘Reef, Reef, Reef’ were starting to occur between every song as the excitement, stomping, sing-alongs, headbanging, rocking out and letting loose continued to build. The sassy and badass attitude filled “I Would Have Left You” sent the punters into a frenzy and saw Stringer jump down to the front row to feel the love. Hands reached out to his torso and epic beard as momentarily the love over spilled. The brilliant “Naked” followed and for me these two songs back to back got two ticks on my notepad as I looked set to name it as my night’s highlight. That, however, would come in the encore with the performance of “Yer Old,” which saw the place go off and it felt like the balcony might collapse due to the moves it inspired. The performance of this song encapsulated classic Reef and as Stringer fist bumped with the front row and Bessant in particular looking like he’d died and gone to heaven, it seemed as if the band felt like this was them in their full glory too. It formed part of a high octane encore, which at its finish, had the crowd continue with their chants of ‘Reef, Reef, Reef.’ Of course, that was it for the night but as people made their way out the venue, no doubt the parting thoughts drifted to the prospect of a new Reef album further enhancing a triumphant new beginning.

Keep up to date with all thing Reef at reefband.com