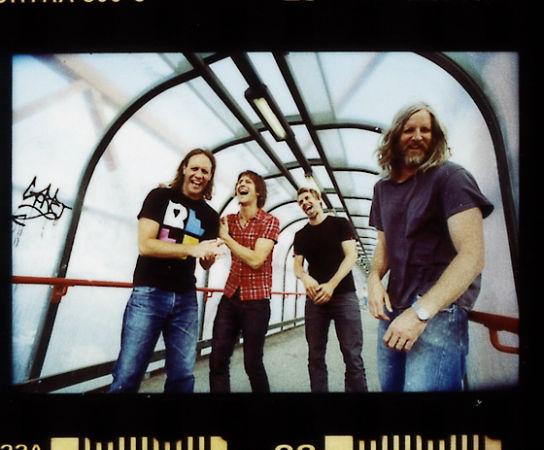 Competition: You could win tickets for Reef’s gig at O2 Academy Bristol on 14th November by answering this easy question: What is the name of Reef’s debut album?

20 years after Reef first got together, Gary Stringer (Vocals), Kenwyn House (Guitar), Jack Bessant (Bass) and Dominic Greensmith (Drums) will celebrate the anniversary of their birth this month with a five-date UK tour, which includes a performance at O2 Academy Bristol on 14th November. With classics like “Place your Hands”, “Come Back Brighter”, “I’ve Got Something to Say”, “Naked” (the band’s original name), and “Set the Record Straight” in tow, the West Country legends are guaranteed to make fans glow inside.

Kevin McGough was able to catch up with Gary Stringer for a chat about Reef’s first 20 years and their new tour.

It’s 20 years since you, Jack, Dominic and Kenwyn first got together and recorded your “Purple Tape” demo. What do you recall of those early jams?

The other lads went to a music college on the edge of west London. We rehearsed for those demos there. The tape includes the first version of “Mellow”, which me and Jack wrote and the first version of “Good Feeling”, which had this Australian guitarist playing wah wah pedal on it. I think the other songs were “2nd Chance” (unreleased) and “Hard” which I used to love to play with the lads; it had a real intense feel to it.

When did you realise you had something so special?

Straight away really. I was young and full of myself more than likely!

Paul Weller hearing your demo helped give you a break in 1994; do you remember how that came about?

We cut a 7-inch single of “Good Feeling” which was funded by Sony as part of our label demos, but the record had no label print. Paul Weller heard this and loved the B-side “Choose to Live”.

Were you a fan of his beforehand and what was it like touring with him?

Yes. I grew up in England in the eighties so of course I was very aware of Paul Weller and The Jam. Touring with Paul was incredible, he helped us so much with our confidence because he used to come and watch the sound checks and all the shows too. It felt like he was really into the music. He made us feel at home.

If you had to choose one Reef song to play to someone who hasn’t heard of you guys that conveys the true essence of the band, what would it be and why?

How has the dynamic within the band changed since those early days?

I’m not sure it has. Everybody is more or less the same.

Will you be performing any new material on the tour?

Yes, at least one new song probably two. A friend of ours has made a great film called Barking At Trees and we’ve been asked to record a song for the soundtrack.

Which part of the tour are you looking forward to most?

Could you ever have anticipated having this kind of longevity?

Finally, in those 20 years what is your favourite memory of being in Reef?

Our first performance at Glastonbury festival in 1995. We played the Other Stage in the afternoon sun and I wore shorts. It was easily the biggest crowd we’d ever played to. Lots of folk and some faces we knew. It was amazing. Afterwards with a gallon of Mudgley cider in hand, I wandered off to get lost in the festival.

Keep up to date with Reef at reefband.com

For ticket information for the band’s date at O2 Academy Bristol, head to o2academybristol.co.uk