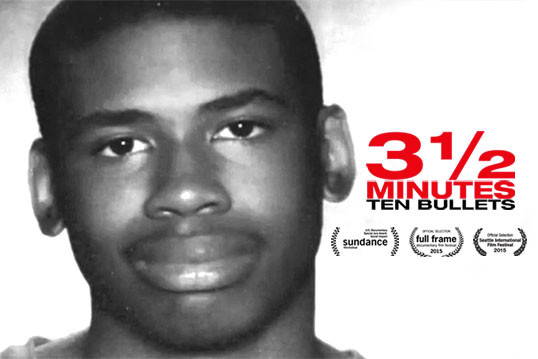 The day after thanksgiving, and while a number of Americans were preoccupied with the consumerist frenzy of Black Friday, it was the requirement of two rather venial purchases that brought two vehicles together at a gas station in Jacksonville, Florida on the night of 23rd November 2012. An SUV containing black teenager Jordan Davis and three friends (also black) stopped by for chewing gum and cigarettes a short time before 45 year old white man Michael Dunn and his fiancé parked up alongside them. While Dunn’s partner was in the store buying a bottle of wine, an argument ensued over the volume of the music emanating from the teenagers’ vehicle. Angry words were exchanged, threats were made and the episode ended tragically when Dunn fired ten shots into the SUV, hitting Davis three times and killing him.

The understated but relentlessly gripping ‘3 ½ Minutes, 10 Bullets’ focusses mainly on Dunn’s trial, his case dependent on Florida’s “stand your ground” law whereby it is contended that Dunn acted in self-defence on the grounds that he had reason to believe that Davis was an armed threat (no weapon was ever found at the scene). We see a nervous media attempt to downplay the racial aspect of the shooting and later in the film Dunn’s defence lawyer asserts that race has never been mentioned by his client.

However, though treated with care and subtlety, the film leaves the viewer with the inexorable feeling that the raising of racial factors in such a case is unavoidable; if the “stand your ground” law is contingent on a “perceived” threat then surely one must consider the likelihood that one’s perception of what constitutes a threat may well be shaped or exaggerated by prejudice towards another race and the sub-culture that surrounds it.

Featuring interviews with Davis’ parents, including a heart-breaking moment when they tearfully lament their supposed failure to protect their own son, it is clear from the film’s early moments which side of the argument we are dealing with. We also hear from Davis’ friends, a couple of whom were with him in the SUV on the night of the tragedy, as they fondly remember him as “the worst basketball player that you ever will see” despite his sartorially looking the part on the court. Nonetheless, the film is certainly not sanctimonious and never strays into the jarringly biased.

With a direct approach in telling its story, the film leaves viewers to make up their own minds about Dunn’s character. Ultimately, he does his utmost to convince in the role of victim; we see him defiant and remorseless when interviewed by police and, most tellingly, we hear his recorded phone calls to his fiancée Ronda Rouer while in custody. Entitled and obstinate, Dunn tells Rouer “I can’t shake the fact that I feel like a raped girl that they’re blaming because I was wearing skimpy clothes.” Perhaps fundamental to the understanding of his intentions, Dunn fled the scene of the shooting, never contacted police and wasn’t arrested until the following day.

Significant sections of the film come in the form of raw footage from Dunn’s trial and, despite a welcome lack of music or synthetic melodrama, large parts play out with a near cinematic tension. The three friends who were in the vehicle with Davis on the night of the shooting and girlfriend Aliyah all take to the stand; for the most part, they come across as likeable and level-headed and, in contrast to Dunn’s perception of them as “thugs” or “gangster rappers”, they essentially seem like normal, middle class kids.

The film arrives at its most gripping moment when Rouer is called as a key witness; palpably nervous and near falling apart through her tears, Rouer’s testimony delivers a vital turning point in the trial. The high stakes drama is prolonged further when the jury repeatedly reconvene for what becomes an unprecedented period of deliberation as they contemplate Dunn’s most serious charge of First Degree Murder.

Obviously pervading as the primary theme of ‘3 ½ Minutes, 10 Bullets’, and further echoed in the film’s occasional references to the similar death of Treyvon Martin (killed nine months before Davis), one cannot help but wrestle with the nebulous implications of the “stand your ground” law. Phrases such as “justifiable use of force” and “reasonable belief that one’s life is in danger” are all such opaque notions that exist somewhere within the tangled quagmire of the words of one individual and another.

Ultimately, how can a jury decide what is going through the mind of individuals? If a threat need not be an “actual” one, then how can the reliability of someone’s “perception” of danger be uniformly legislated? It is hard to disagree when we hear at the end of the film that “stand your ground” has resulted in a “law that emboldens individuals to initiate confrontations which end up killing unarmed children”.

For British viewers at least, a subtext of the film will be the reality of America’s liberal gun laws and the ludicrous notion that Dunn was able to legally own a handgun which he could then wield on a rage filled whim outside a gas station. With the film’s U.K cinema release coming just a day after nine people were massacred at Umpqua Community College in Oregon, one wonders when the US will finally break the endless paradigm that the next gun related tragedy will be the one that finally results in the country waking up to the pernicious reality of its gun legislation?

A consistently absorbing and tastefully executed documentary film, ‘3 ½ Minutes, 10 Bullets’ is a compelling, though sobering, account of US self-defence laws, the ongoing issues of racial conflict and the perennial struggle of America’s relationship with firearms.