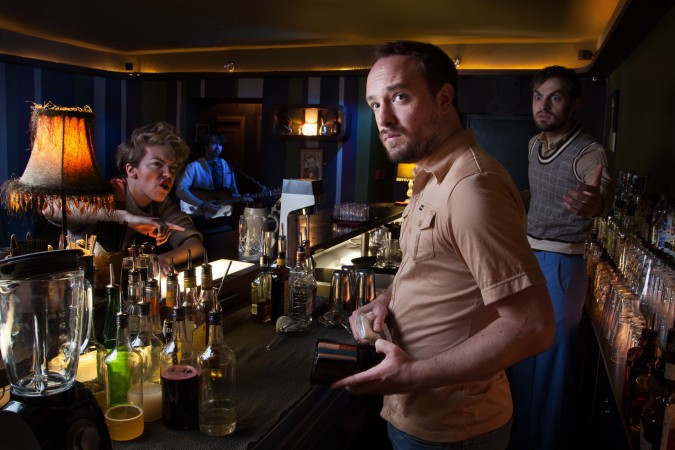 What becomes of a person, when they turn out to be the very thing they hate the most?

This is the diametric conundrum explored by the characters and sketches of Man Booker shortlisted author, Patrick DeWitt in his 2009 novel Ablutions, now adapted for the stage by the combined talents of Bristol’s very own Fellswoop Theatre.

Forged in the fires of Bristol Old Vic’s Ferment Festival in 2012, and after a critically acclaimed run at the Edinburgh Fringe, Fellswoop bring home this darkly witty tale, set in a stale, beer soaked Hollywood bar, of a forlorn barman who delights in mocking his low-life drunken regulars only to be exposed as much, if not more, of a desperate booze hound as any of them.

Whilst a modern story there is a distinct whiff of 1950s Americana mixed in for good measure. A tone that is in part provided by the accompaniment (by the cast themselves plus Ben Osborn – the groups resident musician/musical director) of the piece by a country infused soundtrack. This faded country façade certainly makes it feel more like we are watching Johnny Cash drink his way to divorce and despair than it does anything more current.

De Witt’s narrative exudes the same gloomy humour that so many Coen brothers’ films do (see Fargo or No Country For Old Men), that is to say mirth found in the most abhorrent of human behaviour.

Our chief protagonist (Eoin Slattery) is certainly not someone to be admired or pitied; he cuts a stubbornly self-destructive figure, oblivious to his own shortcomings, and unrepentant to all those he hurts, like a broken cowboy searching for his dead horse while his house burns down with his family inside behind him. 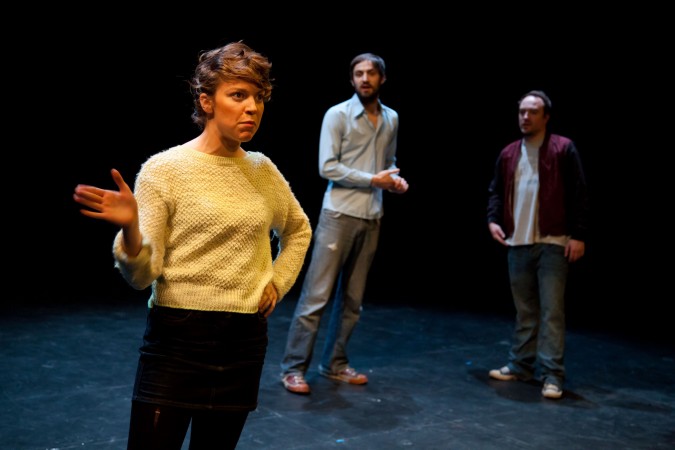 Slattery’s interpretation is both believably maddening and disturbingly realistic. Scenes depicting him betraying ‘friends’, vomiting up after a heavy nights drinking and of violent stomach cramps brought on by other excesses of intoxication are all so hard to watch it feels like it is in fact your friend or relative twisting on the floor in front of you. For all his obvious flaws it’s also a timely reminder that this remains a human being after all.

He is surrounded by a myriad of fascinating and thoroughly deplorable eccentrics all played out by the minimal cast of Fiona Mikel (all female characters) and Harry Humberstone (all males).

Ablutions: A ceremonial act of washing parts of the body or sacred containers.

The two perform a phenomenal number of accents and mannerisms in the fast paced action that would leave most dizzy. Indeed, in spite of the unrelenting swiftness of the show they more than match Slattery’s brilliance.

In fact it is perhaps Humberstone who is the star of tonight’s proceedings as he gives an utterly mesmeric performance of a remarkably diverse array of characters from Curtis the “chronic masturbator…and ‘long’ story teller” to the overtly camp Health Food Store Clerk to the dubious Hotelier. Each is performed with perfect pithiness, and great physical timing, which brings welcome brevity to proceedings, especially in the second half.

A brilliant, if bleak, tale, Fellswoop bring De Witt’s novel to life with phenomenal and convincing performances from all.

Now that’s something we can all drink to.

By Kevin McGough
All photos by Charley Murrell

Get tickets by clicking here.