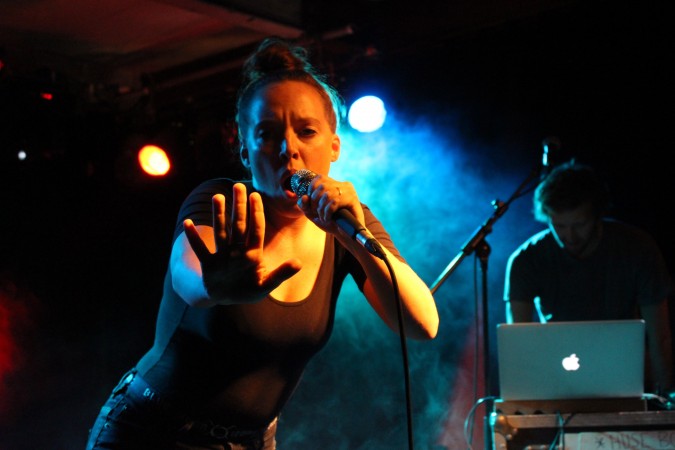 Melding melancholic electro with a bluegrass soul North Carolinian natives Sylvan Esso are currently on the crest of a wave and come to Bristol’s Marble Factory with the kind of swagger that only an unstoppable momentum can imbue.

Following on from the release of the eponymous debut album in May last year the band have toured the world, made their US network debut on the Jimmy Fallon Show, picked up millions of hits on Youtube and just over a month ago played both weekends of the legendary Coachella Festival in California.

It certainly seems like the energetic American duo have bought the desert sun with them as the audience bathe in the warm yard outside before the show on what is easily one of the hottest days of the year thus far.

Combing the impressive talents of Amelia Meath (on vocals) & Nick Sanborn (electronic instrumentation) their sound is a confluence of ideas ranging from lo-fi griminess to 1950s folk – think of an animated Joan Baez jamming over a dubstep Flying Lotus remix and your not too far away.

On stage the sound is certainly grimier than on record with the bass pushed all the way to dub levels that leaves the ears ringing and the bass rig struggling to keep up. But like any good band there is still the full cinematic spectrum of different emotions and sounds. From the more industrial club dance floor hit of ‘H.S.K.T’ with its playgorund refrain, to the epic pop of ‘Play it Right’ to the prosaic glumness of ‘Uncatena’ and even the explicitly folkiness of ‘Wolf’.

Despite such a wide range of flavours it’s still very much accessible. Something which appears to have been a critical element of the creative process for the band as Meath says: “These songs were meant very specifically to be catchy, to appeal to a wide audience…”.

For what on record is a fairly spacious and subtle sound they certainly know how to get down in their live shows. Meath pirouettes and dances around like a middle eastern ballerina whilst Sanborn gyrates over his mixing desk like a convulsing snake. Soon the dry-ice billowing of the stage can easily be mistaken for clouds of sweat as Meath notes: “These lights are fucking hot” before she asks for the house lights to be brought down. “That’s better. It doesn’t feel Math’s class anymore” she jokes.

The crowd reward their twirls with rapturous applause throughout. The love is certainly reciprocated as Sanborn notes: “You guys are lovely” and that “this is awesome. We really have the best job”.

The real moment of the night though belongs to standout track ‘Coffee’ in all its xylophone elegance. Shrugged off by the band with all the confidence of a band understandably confident in its own skin from extensive touring the crowd sing back the chorus in choir like unison that brings the hairs up on the back of the neck to all present.

Impassioned and effervescent Sylvan Esso produce electro that has real soul and talks to both music’s past and it’s future.

Click here to see where they are playing next.