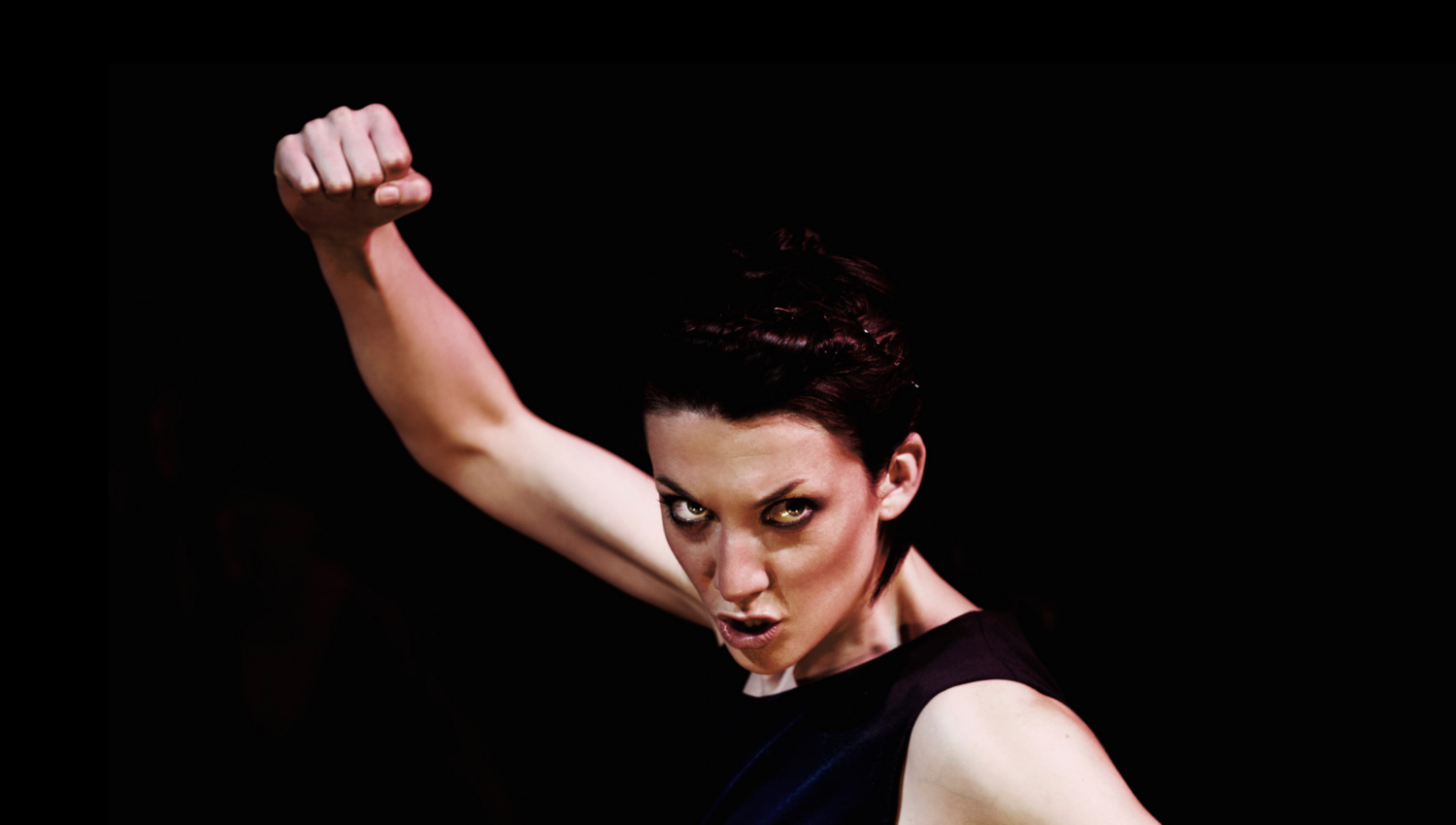 We are in Ancient Greece, the cave of Medusa and her Gorgon sisters. A world of heroes and beasts, of gods and mortals. Beheaded by Perseus, Medusa’s head is strapped to the shield of the goddess Athena, and from there she is witness to all the glories and crimes of this mythical world. The latest production from Ad Infinitum brings the ancient world coursing through solo performer Deb Pugh, lasering in on the women who have often been neglected or misrepresented in traditional storytelling.

The mighty Penthesilea leads the Amazons against the sieging army of Greece. The ignored Cassandra has visions of what is to come, and her warnings go unheeded. The cunning Clytemnestra takes revenge on her murderous husband King Agamemnon.

As with previous Ad Infinitum productions, light and movement play a huge part in the performance. With the flick of a bulb and a jolt of her body, Pugh can switch between characters. In a heartbeat, the strutting cockerel of Achilles can become the powerful warrior Penthesilea. A cowering Cassandra at the altar of Athena can become the dignified matriarch Hecuba. Medusa slips in and out of the narrative, visible through the lisping snakes flickering by hand movements around her head.

The world of Ancient Greece is a tumultuous and complex place. When studying it, it is hard to grasp the multitude of gods and mortals, shapeshifters and warriors, parents and siblings. Pugh lends coherence to this world and makes it comprehendible. To do so while shifting backwards and forwards in time, performing solo and with few props is a great achievement. A mic stand becomes an axe, a spear, a walking stick. A simple red carpet becomes a bath overflowing with blood.

There are lots of lovely touches of levity. Medusa’s boyfriend Poseidon is portrayed as a bimbo with a “personality vacuum” who can nevertheless shake the earth when required. Ajax the Great, he who flees from Penthesilea and assaults Cassandra in the temple, is described as a “shitbag.” Medusa has no time for Zeus, who comes to earth to impregnate mortals while disguised as a variety of animals, and eventually sires Perseus through a “golden shower.” Pugh is aware that this is a complex world that she is portraying, tells us that we’re not expected to remember all the names, and admits that “this shit gives me a headache.”

Beautiful Evil Things is a smart, compelling piece that pays homage to the swirling myths of Greece, while never taking itself too seriously. A powerhouse performance by Pugh keeps the action ticking over, and makes us sympathetic towards a host of characters despite their murderous ways.