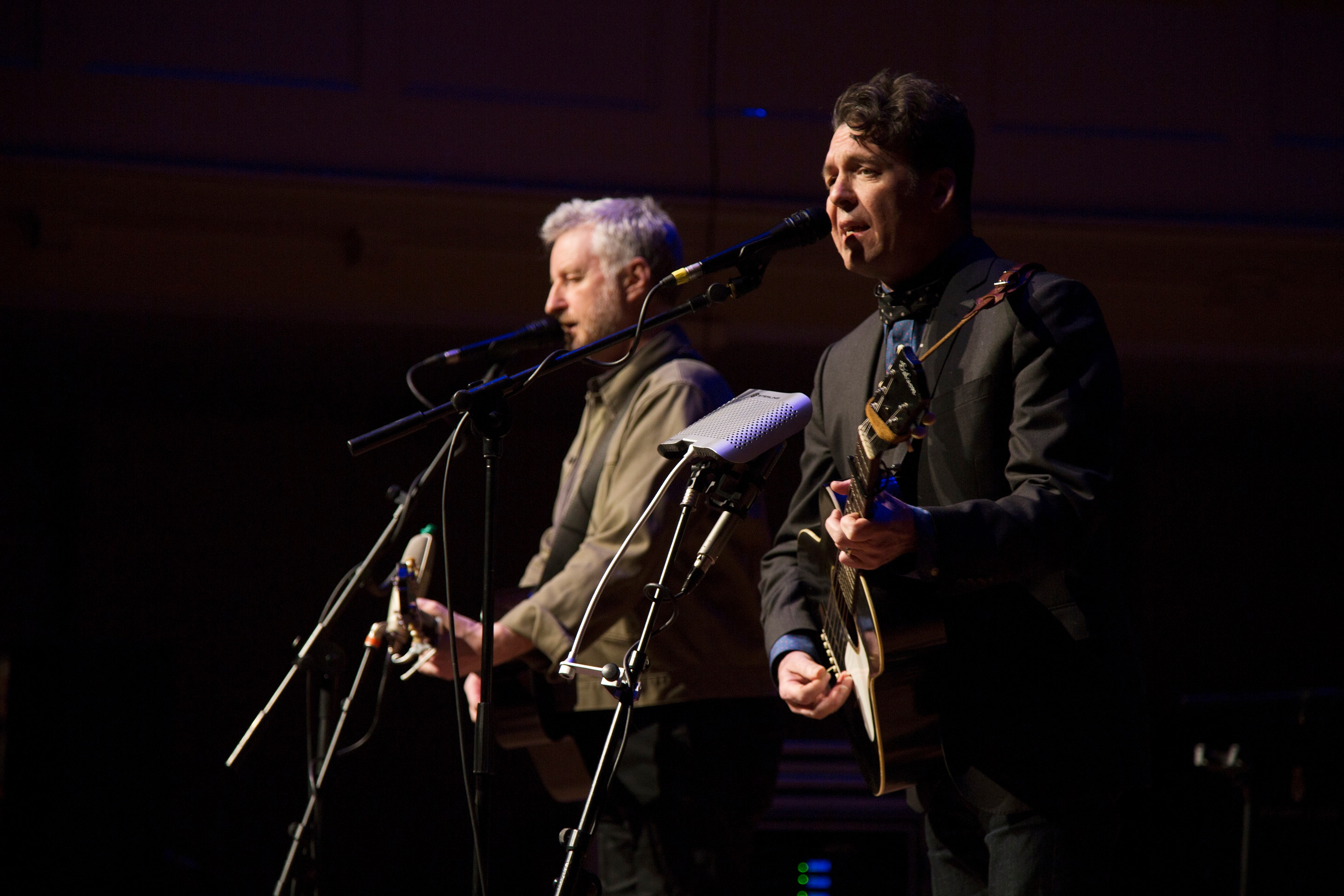 During a five day, 2,700 mile train voyage between Chicago and Los Angeles embarked upon by Billy Bragg and Joe Henry in March last year, the two friends of over thirty years recorded Shine A Light, an album of covers steeped in rootsy Americana and reconnecting with the lost culture of US train travel. Of course much has happened in the world since that trip and thus tonight’s show is furnished with its intriguing dual personality: part romantic travelogue and part political defiance in the face of these tumultuous times either side of the Atlantic.

The pleasant blending of the two men’s voices – Bragg taking the low harmonies with his Essex rumble while Henry compliments it with his higher American lilt – is immediately apparent in opener ‘Railroad Bill.’ Subsequently, the introduction to Johnny Cash’s ‘The L & N Don’t Stop Here Anymore,’ reveals that an integral feature of tonight’s performance is the regaling of Bragg and Henry’s cross-country adventures; we learn of Chinese immigrants who built the railroads of El Paso, the near obsolescence of passenger trains across the US and, while passing through Tucson, Arizona, an empathetic view of a Mexico that appeared “like 1850” compared to suburban areas of the States. 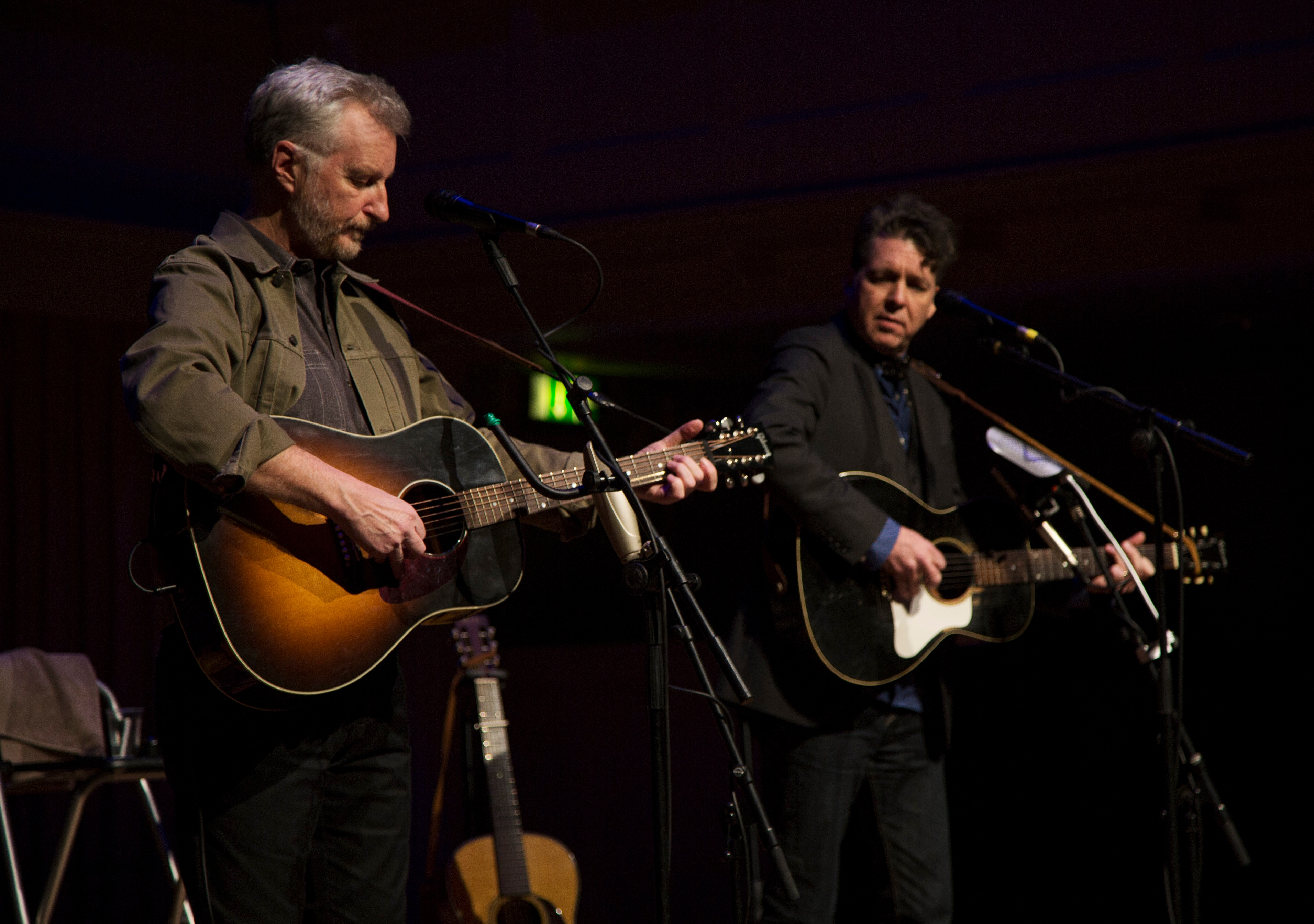 Bragg and Henry are both comfortable raconteurs and the folksy, acoustically strummed songs combine with the interim narratives to successfully evoke the open landscapes of America, the yearning possibilities of travel and the railroad related images of brakemen (Jimmie Rogers’ ‘Waiting for a Train’), steam locomotives (Hank Williams’ ‘(I Heard That) Lonesome Whistle’) and Midnight Specials (Lead Belly’s song of the same name).

Another Lead Belly tune arrives in the form of ‘Where Did You Sleep Last Night’, although after hearing Kurt Cobain’s searing interpretation on Nirvana’s MTV Unplugged in New York, it’s difficult to get beyond Bragg and Henry’s lightly strummed, cooing duet. We also hear the interesting story of Bragg staying in room 414 of the Gunter Hotel in Texas, the exact space where Robert Johnson recorded the first of his two historic recording sessions. 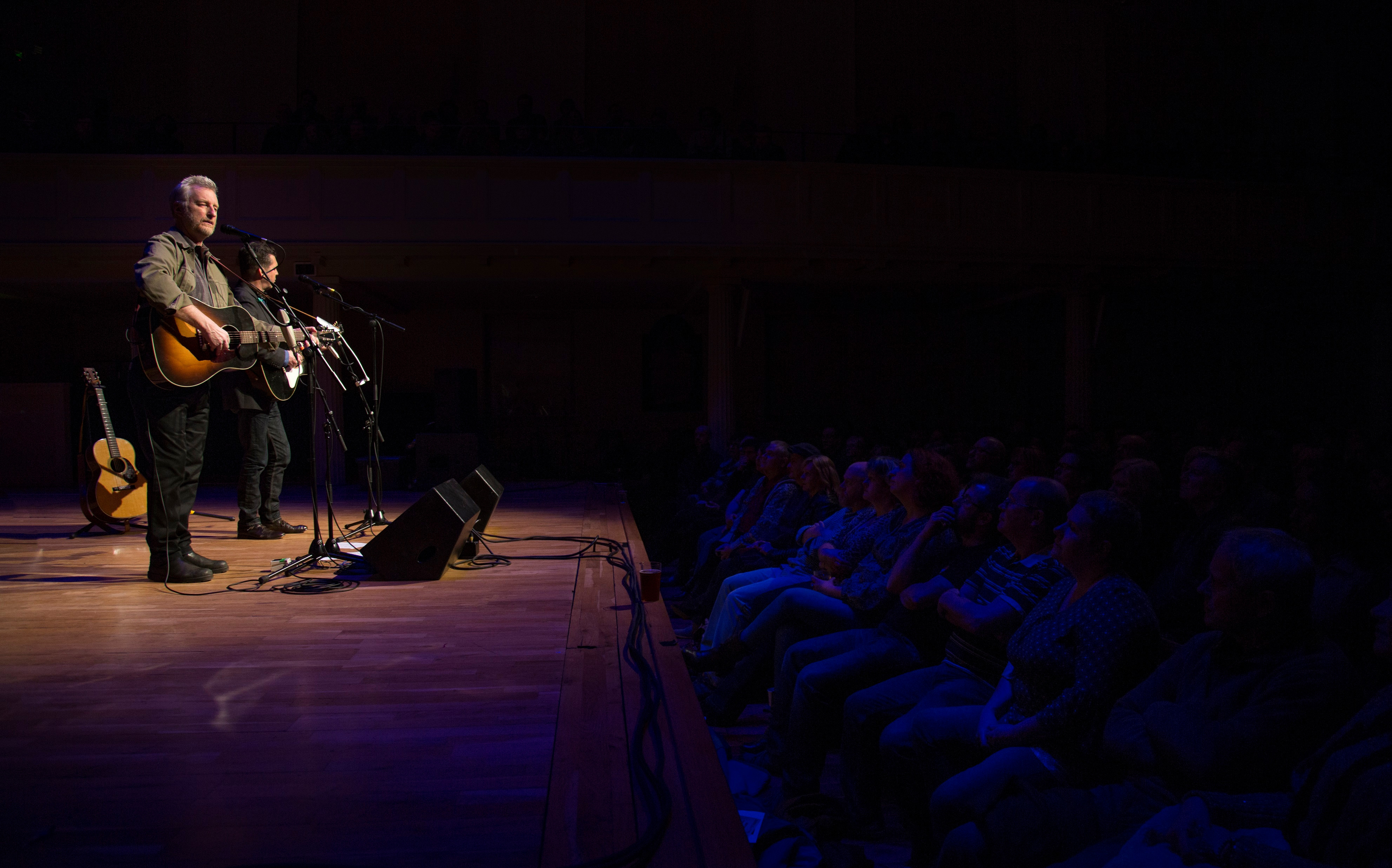 Giving the evening a well-judged parity, the two musicians each take solo spots at either side of an interval. Apologising that he has “no upbeat material”, Henry delivers the lovely ‘Trampoline’ and, via an anecdote involving Harry Belafonte, takes to the piano for ‘Our Song.’ As Bragg does later with Greg Trooper, Henry pays tribute to a fallen comrade with a performance of Alan Toussaint’s ‘Freedom for the Stallion.’

“I didn’t see it coming – Brexit, Trump, Leicester City” half-jokes Bragg.  As is to be expected with such a fierce political animal, his solo time on stage is dedicated to his raging against the current state of affairs in Britain and America. He showcases a new song (“it’s got a point and an ending… unlike the film La La Land”) called ‘Sleep of Reason’ which alludes to the post-truth/fake news era (“The levy that protected truth can no longer hold the flood”). He also delivers ‘Accident Waiting to Happen’ (featuring the lyric “dedicated swallower of fascism”) and Anais Mitchell’s rather prescient ‘Why We Build a Wall’ with a satisfyingly caustic sneer.

Alongside the railroad romance and political venting, tonight’s unique show also serves as a musical history lesson; as well as the seminal influence of the likes of Robert Johnson, highlighted is the direct lineage of The Beatles from Lonnie Donegan and that of Bob Dylan and Woody Guthrie with the night’s final two tracks. It’s an intriguing brew that – along with the reliably excellent acoustics of St George’s – has made for a highly compelling spectacle.

Photos by Karina Jacenko – Visit our full gallery from the show.