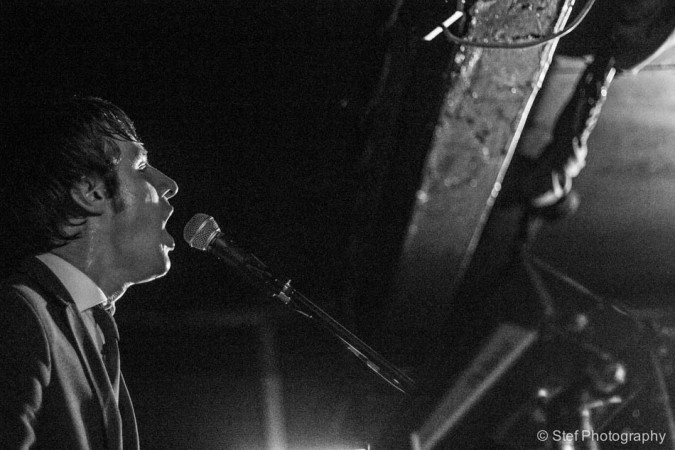 East India Youth, AKA William Doyle, has stated that he increasingly sees himself as a “non-musician.” This may come as a surprise from an artist whose debut album, Total Strife Forever, garnered critical acclaim and secured him a Mercury nomination. Nevertheless, it is perhaps an understandable position, coming from a man who deals more in atmosphere and emotion than melody.

On a superficial level, Doyle brings sharp style to the table of electronica, and is rarely if ever seen without his trademark skinny fit suit. Tonight is no different, his woollen attire bringing out a dense sweat as he jerks and gyrates behind his board of electronic instruments. His music works perfectly in humid and crammed dens like Exchange.

While his previous visits to Bristol presented a work in progress, albeit one with “unbounded potential”, he is now a much more polished act. A nightmarish, apocalyptic opening instrumental segues into ‘Turn Away’ from his latest Culture of Volume album – perhaps the track that provides the clearest link back to Total Strife Forever. This is particularly evident in it’s melancholy vocals, reminiscent of the outstanding single ‘Heaven, How Long’, while it departs with chugging industrial rock.

‘Beaming White’, meanwhile, brings in high tempo synth pop, harking back to a-Ha at their very best. It is clear that Doyle has experienced no ‘difficult second album’ syndrome, and new material stands up very well against older favourites like ‘Looking for Someone’ and the glacier cool of ‘Dripping Down’. Doyle creates an incredibly full and almost sinister sound, but is able to show a playful side when the stand his midi sound board collapses during the latter track. While the manager is called in to fix the issue during the song’s bridge, Doyle dryly states that “I can keep this bit going for a while”, before eventually and gloriously bringing in the heavy dance drop.

In all, Doyle has proven that he really is getting better all the time, and one can only hope that he continues to fulfil the potential that he so clearly has.