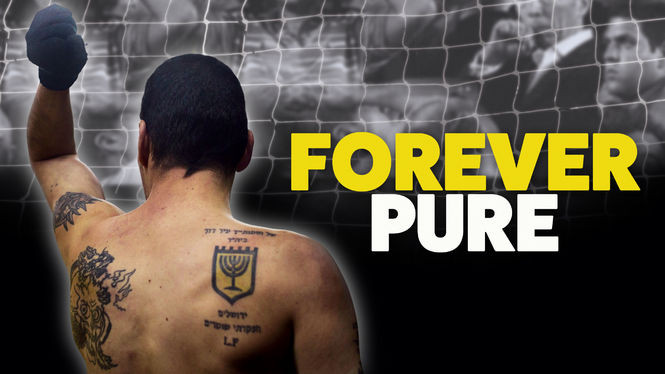 As a window on to the hate-fuelled quagmire that has shaped much of modern history – that being the enduring religious, ethnic and tribal tensions between the State of Israel and her Arab neighbours – ‘Forever Pure’ makes disheartening viewing and leaves one fatalistically bleak about the future of the region and, by extension, any chances of global stability. It’s probably a good job then that Maya Zinshtein’s film is nothing but a compelling and powerful documentary experience as it delivers its bad news for humanity.

At the start of the 2012/3 season, Israeli football club Beiktar Jerusalem – historically a political symbol for 2nd class Israeli citizens and possessed of right-wing affiliations – have been struggling near the bottom of the league for the last four years.  This seems to matter little to the Beiktar supporters as a crowd of 2,000 greets them at the training ground before the season has even begun. The crowd is largely made up of a group called La Familia, the team’s hard-core fanbase of radical nationalists. “I love you/I think about you always and forever” the crowd chant. The passion and fervour of these supporters is absolutely clear; Beiktar appears to mean far more than just football.

After the first half of the season sees an ascendant Beiktar reach 4th place in the league, a bizarre decision by the club’s Israeli-Russian oligarch Arcadi Gaydamak sees them travel to Chechnya for a mid-season friendly. Gaydamak is immediately presented as a dubious character; the French police have a warrant for his arrest, he is implicated in a shady arms deal with Angola and, knowing next to nothing about football, it’s revealed that he bought the club to enhance his own political aspirations. His true motivation behind the Chechen trip is anyone’s guess. However, the outcome is this: Beiktar sign both Dzhabrail Kadiyev and Zaur Sadayev – the first Muslim players in the club’s history.

A great strength of ‘Forever Pure’ lies in the fact that it is utilises an ample amount of footage that captures all key events and, aside from the scant use of on screen text and a judiciously balanced amount of talking head interviews, requires little reconstructive assistance. The viewer is therefore thrown into a highly visual narrative of football matches, training sessions, crowd scenes, press conferences, changing rooms and behind-the-scenes moments. This makes the film a pleasingly immersive experience and it hums with an intensity that rarely subsides.

The fallout from the signing of both players is sadly predictable but nonetheless shocking in its unwavering spite; the players are booed and jeered at their first training sessions, and a chorus translating as “fuck you Kadiyev/Sadayev” – to the tune of The White Stripes’ ‘Seven Nation Army – rings around the stadium for their first home appearance. The teenage Kadiyev fans the flames of his own precarious situation after being red-carded following an altercation with a spectator. As for Sadayev’s situation, it seems temporarily aided after he scores his first goal. However, this only serves to induce a partial walkout by some sections of the Beiktar crowd and a near total boycotting of subsequent matches sees the club thrown into chaos.

Zinshtein’s film also touches on the subjects of individual expediency and demagoguery as we learn of Beiktar’s significant role in the political landscape. We see a series of aspiring public figures (there’s a clip of Benjamin Netanyahu performing headers on the Beiktar pitch) effectively using the club as a propaganda tool on the path toward political power. Meanwhile, young defender Ofir Kriaf’s currying favour with the boycotting supporters appears both a way of appeasing his own links to La Familia and – after the fans reject goalkeeper and former favourite Ariel Harush for having the temerity to make his Muslim teammates feel welcome – ensuring his own future success at the club.

The film highlights an irony that reveals the extent of the hardline Beiktar fans’ ignorance – though La Familia’s raison d’être seems to be that of anti-Arab animus, Kadiyev and Sadayev are both Chechans, not Arabs. There’s also a reminder that this deeply-rooted enmity is very much a two sided affair as Beiktar face Israeli-Arab club Bnei Sakhnin in a vital last match of the season. “Beiktar fans, they are all sick, with swine flu, they should die young” the opposing fans sing.

One can only feel a little deflated after this account of the awful treatment incurred by two young footballers for merely being of a differing religious background. Furthermore, the postscripts updating us on the film’s main players and the current direction of Bektair Jerusalem F.C offer next to no hope. At least we are left with the consolation of this highly absorbing microcosm of a complex global issue.

Forever Pure is released on DVD on Monday 7th August.