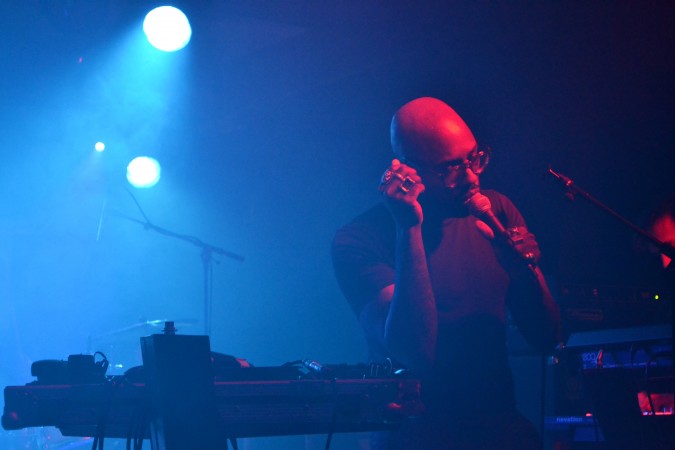 Success of the kind Mecury Music Prize nominated Ghostpoet (Obara Ejimiwe) is currently achieving can be something of a double-edged sword.

On the one hand extra album sales and waves of new fans bring with it many perks and opens many of the doors previously closed to mere mortals. But on the other, such success can often mean an almost irreversible diluting of your fan base, as the fervent hard-core are watered down with new waif like characters who latch onto the artist like passionless limpets.

So it is then, on what feels like the first proper day of winter, many of the swollen crowd in the Marble Factory seem somewhat out of sync for much of the first half of the show, as the songs, that are not yet all that familiar to their ears, washes over the audience without the fervour one might expect.

Little wonder then that the opening salvos lack some of the later intensity, as older more industrial songs like ‘Garden Path’ bring relative indifference before familiarity springs from the more recent ‘X-Marks the Spot’.

Still promoting his latest album, the excellent Shedding Skin, Ghostpoet is by no means bitter after his second near Mercury miss, confessing that “he deserved it man….I’d rather not win, it’s less pressure on the next record.” Before following up with “Any more questions?…that’s enough for now. I will have a Q&A at the end” as the crowd bombard him with cries of love, and implore him not to lose heart following his ‘silver medal’. Besides “I got to try blacksmithing for the first time today” he quips.

A moody, insomniac record, Shredding Skin unsurprisingly provides the bulk of what’s on offer tonight and finds the musician musing on poverty, homelessness and mental illness, without ever losing hope in the human spirit (“I’m not poltical, but in this environment I can’t help it” he recently mused).

With his head perpetually cocked, as if he’s trying to make sense of his new followers Poet bounds around the stage exuding the kind of cool that few can shrug off with such ease.

Whilst Ejimiwe does his thing drummer John Blease is putting in sterling work behind the dry ice and strange spotlight light show, mixing in all manner of styles and rhythms – with highlights including ‘Better Not Butter’, ‘The Pleasure In Pleather’ & ‘Sloth Trot’.

It is still however Emma Topolski, as chief backing vocalist, who when singing in unison with Ejimiwe provides the most heart trembling highlights. Intertwining the softness & lightness of her voice with the gravely bass of Poets dulcet tones truly plucks on heart strings through ‘Meltdown’, ‘Sorry My Love, It’s You Not Me’, ‘Survive It’ & ‘Off Peak Dreams’.

Indeed ‘Off Peak Dreams’ really is the embodiment of all that Ghostpoet does well. 4 minutes of power, rhythm, and melody  all tempered by a subtly not oft seen, it’s a true testament to an artist who has so many strings to his bow.

Maybe he will never get over the line when it comes to the Mecury Music Prize, but on more showings like this what does that matter.