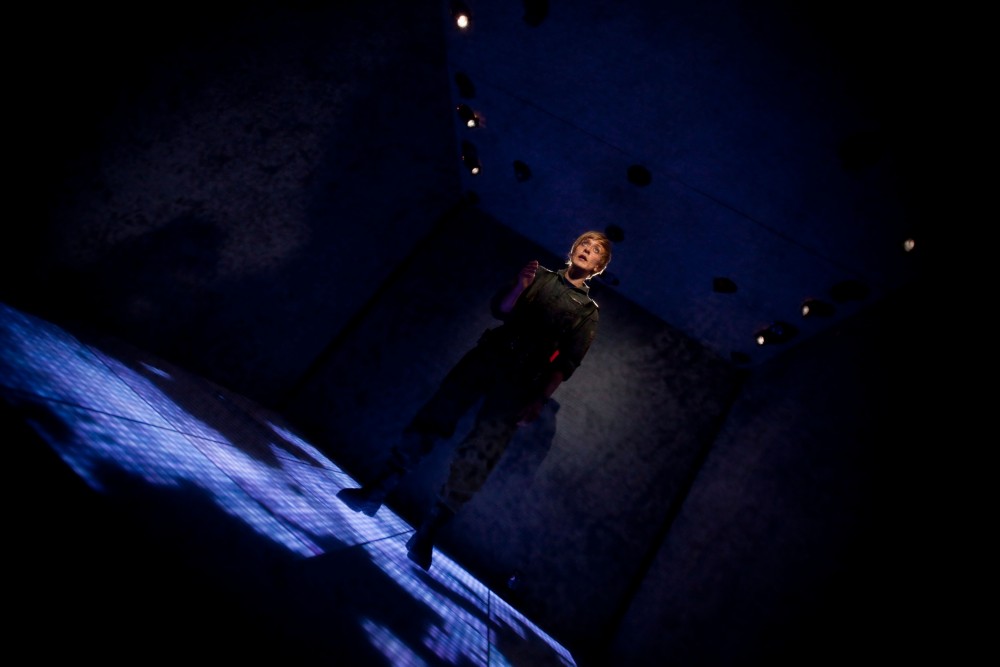 Grounded arrives at the Arnolfini with a shining reputation, having won awards and critical acclaim following its run at the Edinburgh Fringe in 2013. A one-woman show, with Lucy Ellinson taking the stage as a nameless former fighter pilot now constrained by pregnancy to remote-controlling drones in the Middle East from a trailer in the Nevada desert.

It is a pertinent subject matter, of course. While official statistics on drone strikes are shockingly hard to find, some estimates claim that attacks have increased eight-fold under the Obama administration in comparison to that of George W Bush. It seems that Obama’s promise of ‘change’ has come true indeed, but for all the wrong reasons, and the US now has drone operations in a multitude of sovereign states, from Pakistan to Yemen, Algeria, Somalia and Iran.

George Brant’s script uses real pilot testimonies to weave in a sense of authenticity, and this is an essential part of the play. After all, the secretive nature of drone technology and deployment means that many of the audience members will be unfamiliar with the subject matter. Said audience is greeted by death metal and Ellinson standing static in a fluorescent turquoise cube.

It is never entirely clear whether the protagonist can see out of the cube, an arena which she is ensnared by for the whole performance. Nevertheless, it works superbly as an allegory – in conversing with a transparent gauze, the performance becomes impersonal and detached, the very nature of drone warfare.

While extended monologues are always impressive, Ellinson’s performance as the bolshy pilot is a real feat, and she visibly ages as her character becomes dragged down by her job. She and her husband Eric do not have sex or make love, they “fuck”, and she describes herself as a “bullshit mom”. Her greatest love is the sky, the blueness surrounding her, and the grey screen which she operates drones through torments her. It is ironic that the very sky she loves should torture those in the Middle East, for whom the “birds with no eyes” are an ever-present and invisible threat in the azure above.

An incredibly strong show – we should be grateful that it has been brought to Bristol.

Grounded is running at the Arnolfini until Saturday 31st January