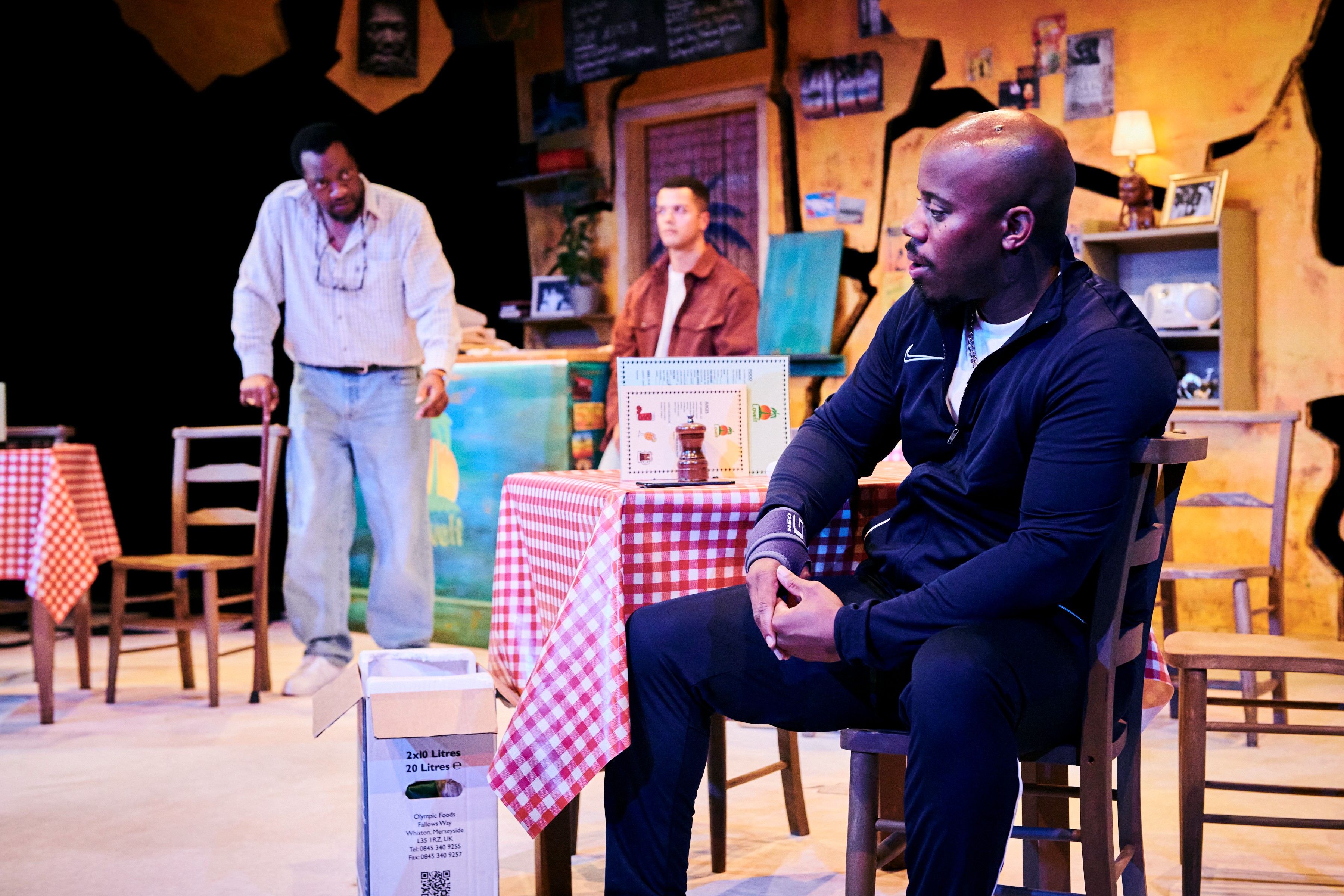 The recent deaths of Chris Kaba and Oladeji Omishore once again highlighted just how pervasive, systemic and institutionalised racism is in this country.

In 2022 black people are still twice as likely to die in police custody, or after contact with the police, then white people.

From the racial bias of Stop and Search to the tragic, preventable and painfully premature deaths of Kaba or Omishore there are no shortage of examples of how racism is still alive and well in King Charles III fair kingdom.

And it is against this backdrop of generational injustice that Revealed sets its three protagonists.

Starting 1 hour after an incident indicative of the one witnessed most recently with Kaba, a stunned community tries to come to terms with the news as protests spill out onto the streets.

Revealed tackles much more than racism, though. In fact, there are few topics (masculinity, sexuality and mental health) that this play doesn’t explore in its rapid fire 2hrs running time.

Struggling to make sense of the senselessness, both in terms of the police brutality dished out to another unarmed friend as well as the strife within their own lives and relationships, three generations of this Birmingham family are thrown together into a crucible within their Caribbean restaurant on this most tumultuous of nights.

While the streets blaze with police lights the restaurant provides a refuge from the storm of anger engulfing the town around them. Soon though each of them finds the walls closing in as the venue turns from a life raft to a prison, as revelation after revelation strikes the family like stamina sapping body blows.

Grandad, Sidney, played by Everal A Walsh (Rockets And Blue Lights at the National Theatre, Dr Who for BBC and Oscar-nominated Best Picture of the Year 2019 The Favourite), is a creaky, cane wielding prophetic and deeply religious character at times, but a lithe coxcomb at others, all jive and jokes. Optimistic and ornery in equal measure the ghosts of his past stagger behind him clutching at his ankles and refusing to let him slip quietly into the night.

Daniel J Carver (Henry VI Parts 2 and 3 at Royal Shakespeare Company) is the prowling and always scowling son of Sidney, Malcolm and also the plays writer. Malcolm is the tormented centre of this whirlwind. Haunted by his and Sidney’s past he cuts a frustrated and repressed character, caught in the gears of life. Weighed down by the realities that he feels the others are incapable of confronting, his attempts to drag the family’s Caribbean restaurant (Love It) into the 21st Century fall on the death ears of his philosophical father.

Dylan Brady, in his first professional stage performance, after playing Danny in Coronation Street for the last two years, plays the youngest member of the family, Luther. Perhaps the most together of the three Luther knows what he wants and has the bravery to fight for it, as yet not broken down by the back breaking trials and tribulations his father and grandfather have lived through.

Carver and Director Jay Zorenti-Nakhid have been working on Revealed for some time (since 2018) and that time was well spent. The script is tight and the pacing excellent. Few plays could keep this frantic pace up without burning out its audience but the balance they find is spot on. Aided expertly by their creative team of Designer – Amanda Mascarenhas (whose fractured tectonic plate of a stage sets the table for everything that plays out),  Sound Designer and Composer – Khalil Madovi, Lighting Designer – Joe Price & Movement and Fight Director – Kevin McCurdy all add their own angle to build the tension and highlight the plight of the three individuals on stage. 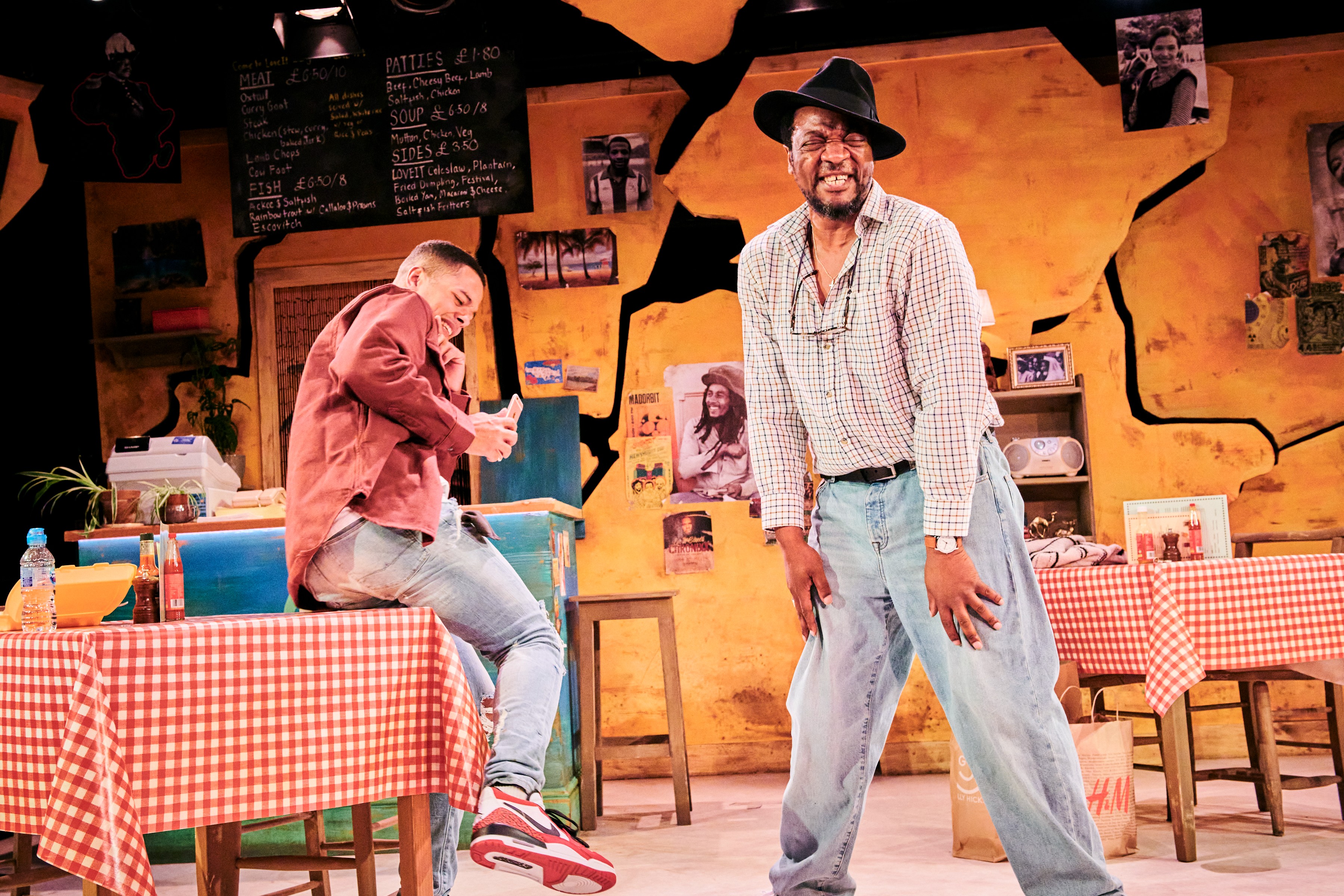 It’s the little attention to detail too that make it all work so well. From the steaming Goat curry and dumplings that Grandad and Grandson feast upon, to the palpable tenderness and love that exudes from each of their relationships (although harder to find in some admittedly). The interplay between the cast is so fluid and comfortable as to feel completely natural.

The cast are all brilliant in their own distinctive ways. Walsh plays the line between cad and comedian faultlessly, mixing emotion and perfectly timed delivery on his hilarious throw away comments (imploring his Grandson to not film his dancing or post it to “FaceSnap”). Carver is truly terrifying as the caged tiger ready to explode at any moment but still makes space to expose Malcolm’s undeniable humanity from time to time. And Brady is excellent as the raging heartbeat of the performance, with the sincerity of his delivery in the most emotive parts of the show really allowing the hard-hitting action to land as it was intended.

Revealed certainly doesn’t shy away from tackling difficult questions head on and at times the language and dialogue can be challenging to hear but it is this honesty that gives it is authenticity: life isn’t simple, or black and white. You can indeed love and hate someone equally, at the same time.

The twisting narrative pivots and tosses us through several big reveals before we are deposited on a cliff hanger with our imaginations left to unpick proceedings. The two minutes standing ovation that accompanied the gripping conclusion was fully warranted and a perfect end.

There are few shows that can make you feel like this and when they come along all you can do is savour that experience for as long as it lasts.

To grab your tickets to this unmissable show Click here.