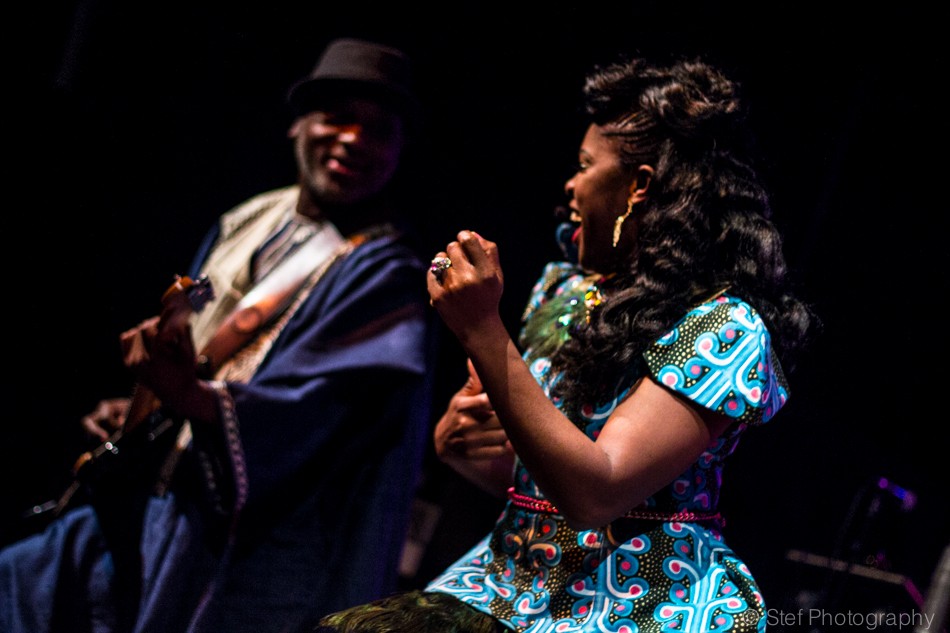 Ibibio Sound Machine arrive at the Lantern at a time when interest in West African funk and afrobeat is high. Alex Gibney’s Finding Fela documentary and David Byrne et al’s reworking of William Onyeabor have brought African music of years past to modern audiences, and artists such as Sinkane have segued such influences into contemporary material.

Ibibio Sound Machine are no different. Established in London by producers Max Grunhard, Leon Brichard and Benji Bouton, the band is fronted by by first-generation Nigerian Eno Williams – whose mother’s native tongue was Ibibo. Consequently, almost all of the lyrics are in Ibibo, which quite naturally gives the material an exotic and intriguing edge. With the band padded out by Ghanaian guitar legend Alfred ‘Kari’ Bannerman, Brazilian Anselmo Netto on percussion and synth/horn men Tony Hayden & Scott Baylis, the result is a sound which manages to come across as both modern and nostalgic.

The creative lyrical fabric of the band’s music, though presumably unknown to the crowd, is centred around folk stories, recounted to Eno by her family as a child. This creates evocative Nigerian poetic imagery set against an edgy Afro-Electro soundscape, cut through effectively by Bannerman’s wah-wah guitar.

While Ibibio Sound Machine’s opening of ‘Voice of the Bird – Uyio Inuen’ starts proceedings with a peaceful offering, the crowd has already been whipped into a party frenzy by the warm up Bodywork and HI LIFE HI FI DJs. With an atmosphere more akin to Boomtown than Colston Hall, the extended versions of uptempo tracks ‘The Talking Fish – Asem Usem Iyak’ and ‘Let’s Dance – Yak Inek Unek’ are what they audience are really here for.

The band is a tight knit outfit, but there is no denying that the absolute star of the show is Eno, and the only thing more colourful than the Ibibio’s output is the frontwoman’s peacock and gold attire. This is the first time that The Fix has seen Bigg Jeff’s dancing eclipsed, and she has to towel her face to continue. She is surely a star for the future. In combination with the highlife, disco, post-punk and psychadelic electro soul backing, Ibibio manage to make sunshine radiate from the stage on one of the coldest nights of the year.