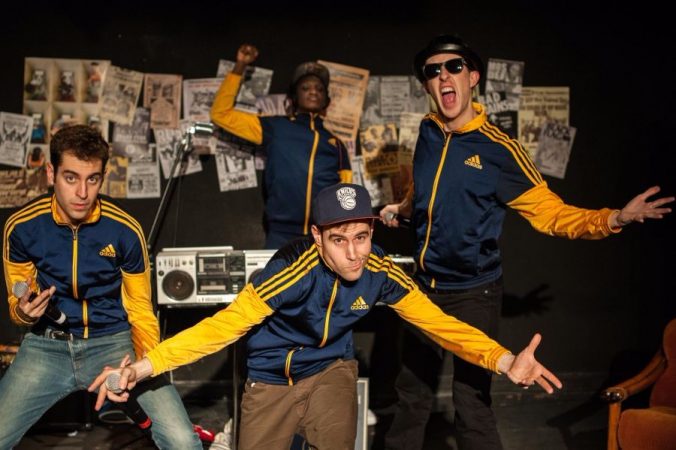 Since moving to it’s altogether more comfortable surrounds in Old Market, the Wardrobe Theatre has put on a consistently attractive programme of events and shows. The latest offering is the nationally-touring Licensed to Ill, the story of hip hop legends the Beastie Boys.

Such a show is not necessarily easy to produce. After all, the story of the Beastie Boys is not particularly dramatic. Aside from covering the birth of hip hop and the eccentric integration of three white Jewish kids into the genre, the story is mostly made up of the band switching record labels and worrying about the amount of time they spend on the road.

However, what makes the show stand out is its complete adoption of the Beastie Boys’ unique sense of fun and abandon. There are goofy pranks and tongue in cheek dance moves, and an entire lack of seriousness pervades the play. A Roland 808 drum machine is substituted for an Etch-A-Sketch due to lack of funds, and a dry German lecturing on the history of Swiss cinema is swiftly dispatched by a couple of blows to the sternum and a blasting rendition of ‘Ch-Check It Out’. 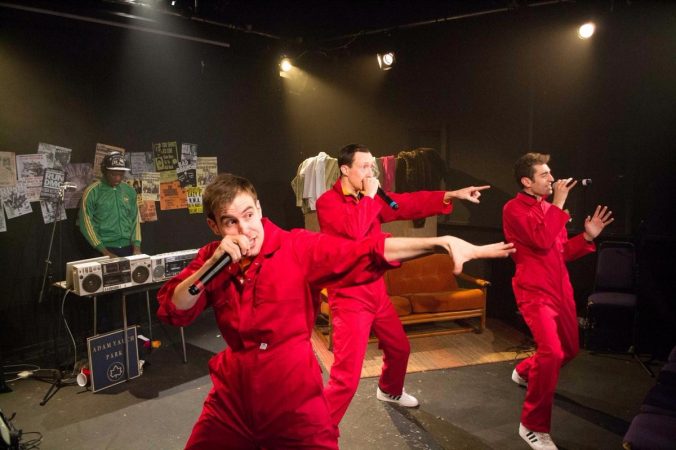 The second outstanding aspect to the show is the live music. Adam El Hagar (MCA), Daniel Foxsmith (AdRock) and Simon Maeder (Mike D) do incredibly well to replicate the Beastie Boys’ signature sound and energy, rapping with proficiency (Maeder in particular recreates perfectly the New York spitting whine of Mike D) and even managing to create a fresh sounding version of ‘Intergalactic’ to close the show. Even better is the performance from Tope Mikun, who plays almost all of the background characters – Rick Rubin, Run, Mixmaster Mike – with aplomb and receives most of the big laughs.

This is clearly a show made with great love for the band. In the end, the greatest praise I can give this show is that it made me want to go home and listen to a shit load of Beastie Boys records.