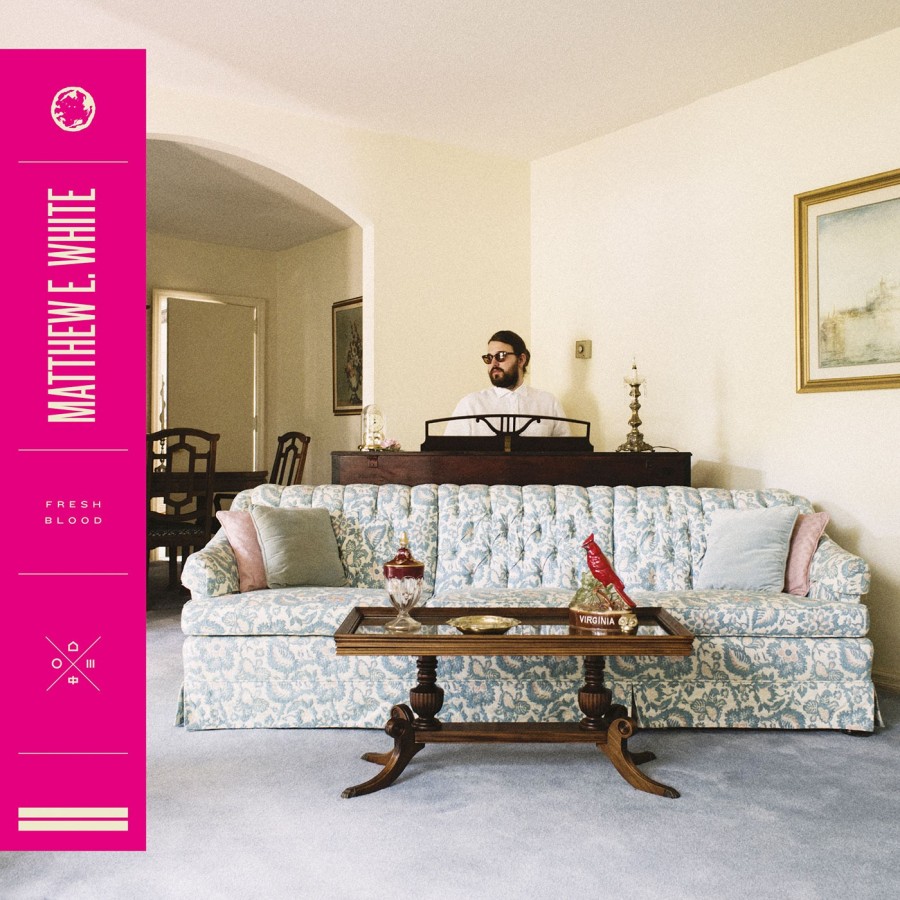 In 2013, Matthew E. White released one of the most unexpectedly acclaimed albums of the year. Recorded on Spacebomb Records, a studio he built in his room, Big Inner brought back the laid back groove of AOR radio stations and soul-infused loved-up rock. In an age of LOUD, the record was a subdued affair, his soppy lyrics whispered and mumbled and the brass backing turned so low it was barely audible. The album was a revelation, entreating listeners to retreat from the highly-polished, overly-produced music that was around at the time.

It is natural then that White’s second album, Fresh Blood, comes with a fair amount of expectation. The first bit of good news is that it certainly doesn’t disappoint. Pleasingly, it is an album that still sounds like it’s been recorded through cardboard, the rough-and-ready production making it sound as if you are listening to it through a badly insulated wall in a recording studio. Once again, the horns are subdued and the crescendos underplayed, with White’s singing only just sticking it’s head above the parapet of the rumbling melody.

As with the greatest songwriters, the tunes emerge organically, as if they had always existed and were just waiting to be put onto record – White simply tugs on the thread of an idea and it emerges through playing. However, this belies the complexity and difficulty of songwriting. It is just that White makes it seem simple and easy.

With this albums predecessor, the initial single ‘Big Love’ had provided a red herring, with a driving tempo and honking brass section that didn’t really reflect the rest of the record. With Fresh Blood this model is replicated, the superb clarity of the single ‘Rock ‘n’ Roll is Cold’ sticking out urgently and insistently among the rest of the tracks, which tend towards a more languid style. ‘Tranquility’ in particular is a gorgeous piano-led grumble with a lilting string section featuring the kind of long fade-out exeunt that White is so fond of. Written in memory of Philip Seymour Hoffman, the heatrbreaking lyrics (“Sixty-five bags of heroin; A man in the sighing; His work is at an end; We feel no bitterness”) are juxtaposed crushingly with the beautiful melody.

There are two potential sticking points with the Matthew E. White’s music. Firstly there is the soppy lyricism, most evident in songs such as “Take Care My Baby.” This, however, is easily combated by the authenticity of the music and the endearing qualities of White himself. Secondly, there is the possible threat to atheist ears in the mentioning of Jesus in tracks like ‘Circle ‘Round the Sun’ and ‘Holy Moly’ – not to mention the rolling final four minutes of ‘Brazos’ on Big Inner with the repeated “Jesus Christ is our Lord; Jesus Christ is your friend”. However, White is not a Christian and uses different narrators throughout his songs – in fact, ‘Holy Moly’ actively tackles sexual abuse within the Church. It seems that the aforementioned faux-simplicity of White’s music hides a much more nuanced reality.

All in all, Fresh Blood is a superb album, and surely an early contender as one of the best albums of the year. It is a slow burner in more than one sense, and gets better with repeated listens. In ‘Rock ‘n’ Roll Is Cold’ White insists that “Rock ‘n’ Roll it don’t have no soul.” Well, sorry Matthew – when you play, it most certainly does.

Fresh Blood is released on 10 March.