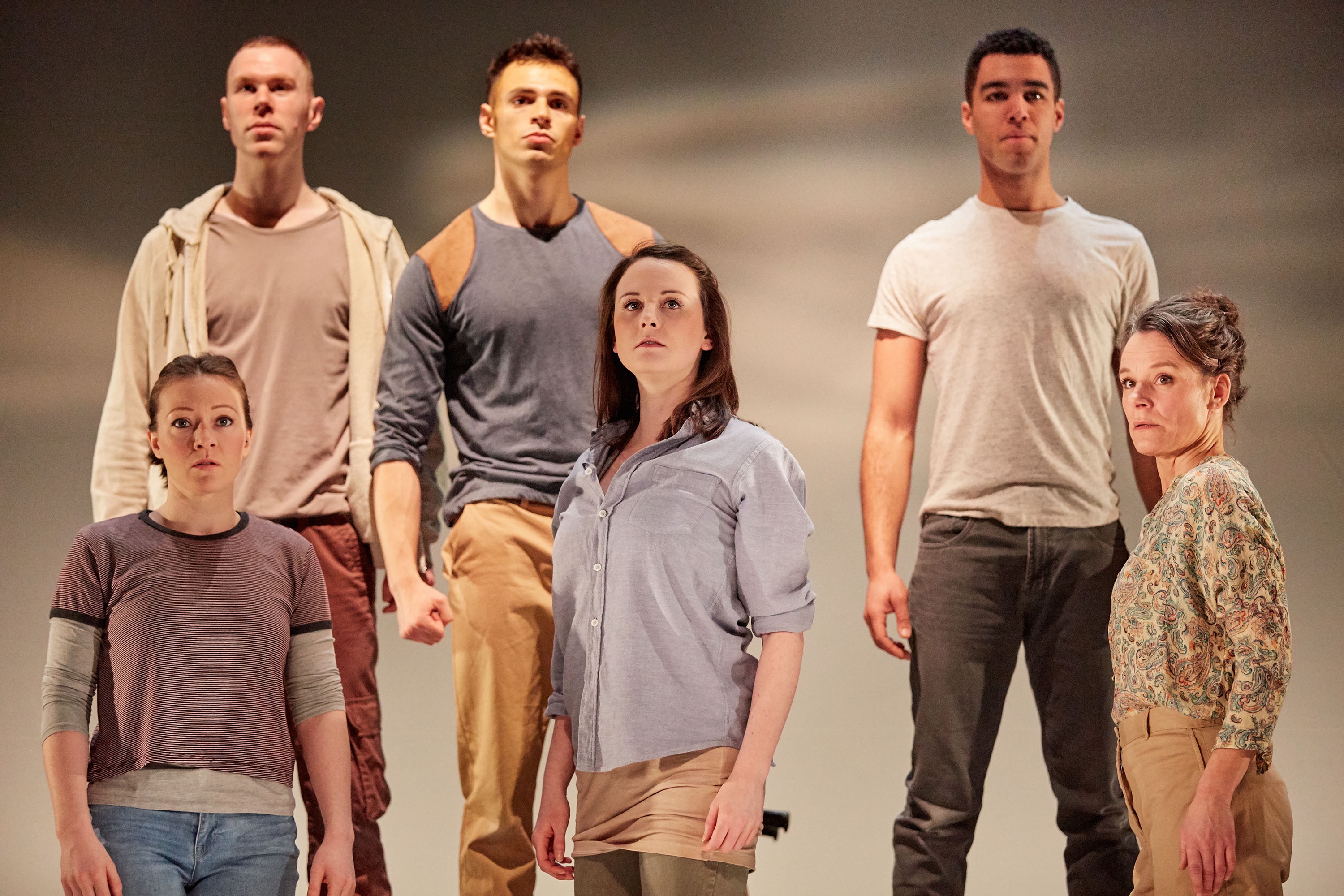 The unrestrained anguish of war will probably never fully be transposed into art, but Pink Mist (based on the poetry of Owen Sheers) gives as articulate and honest a portrayal of the heartbreak of combat as this stage may ever have witnessed.

Back after runs in 2015 & 2016, that were both incredibly successful and critically acclaimed, the show returns for a third time to the Bristol’s Old Vic, ahead of a full UK tour.

The tale charts the story of Arthur (Dan Krikler), Taff (Peter Edwards), Hads (Alex Stedman) & the ladies in their lives, who ultimately have to pick up the pieces once the guns have fallen silent (Rebecca Killick as Lisa, Rebecca Hamilton as Gwen and Zara Ramm as Sarah).

A tragically timeless story of ‘lads’ bravely going off to war in search of adventure, these boys could just as easily be heading off to the Mustard gas and barbed wire of Flanders fields in 1914 as to the IEDs and suicide bombers of Afghanistan in the 2000’s.

Too green to fully comprehend the full weight of their decision to sign-up, it’s an exploration of the spiraling trauma that explodes from such a journey.

Trading jobs at Next & the Avonmouth docks, for rifles and Humvees on the face of it could be seen as a progress of sorts, but the reality often lies much further in the darker side of life.

How teenage squaddies, with virtually no life experience to draw upon, and armed only with their hubris as a shield, could ever be expected to navigate the emotional and physical torment of a war, especially when so many veterans have fallen under its weight is anyone’s guess. So it can come as little wonder when we see their lives come apart at the seams. 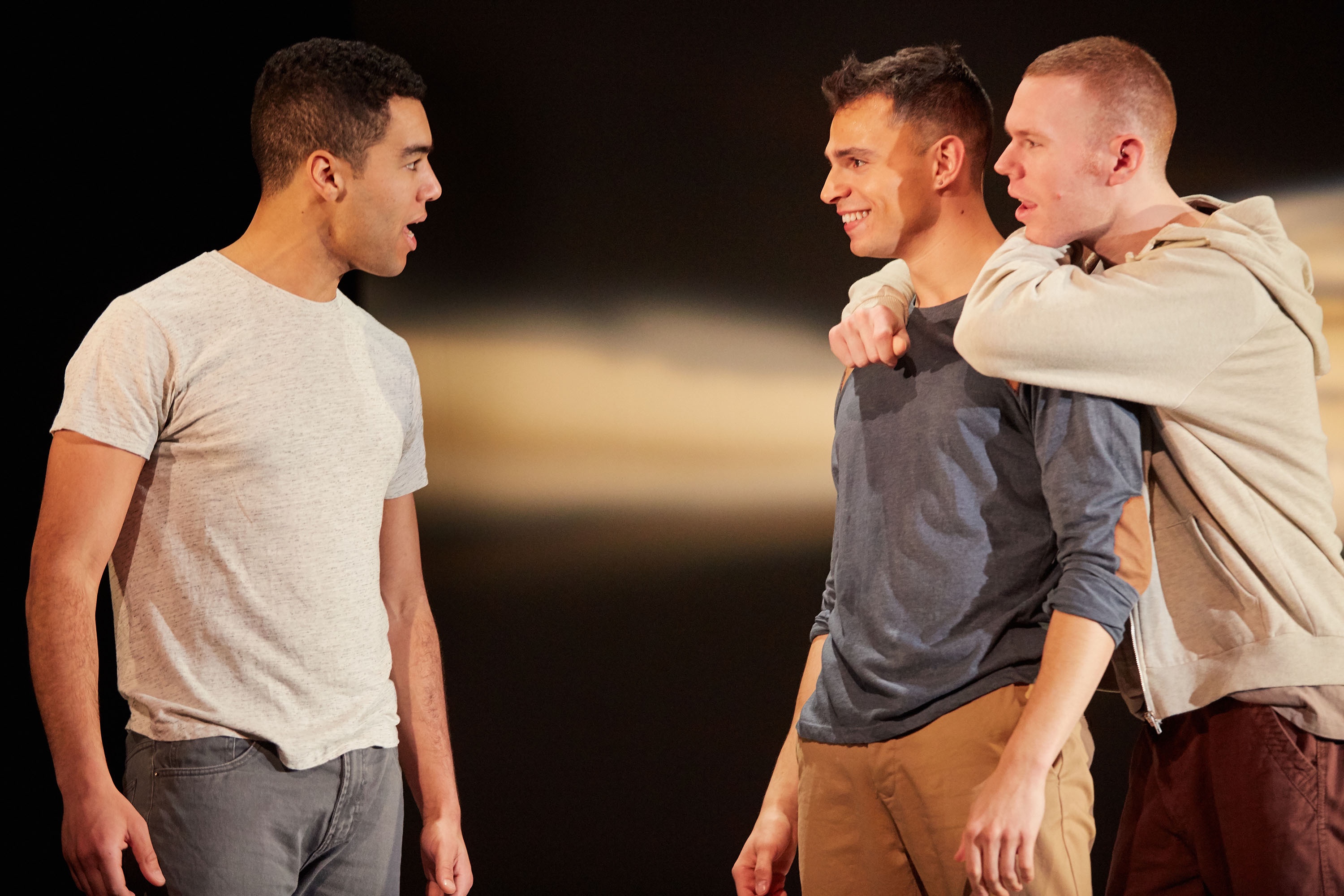 Set against a backdrop that is as Bristolian as Banksy listening to trip-hop on the ss Great Britain, the performance blends sumptuous choreography with a raw narrative and a soundscape (Jon Nicholls) and lighting (Peter Harrison) that exploits the unpretentious stage design (Emma Cains) with somber silhouettes, and flash bangs of colour.

What makes the whole thing even more remarkable is that Sheers’ poem is not based on things he saw or heard first-hand, but rather a retelling of a war zone and its tumultuous aftershocks.

Sheers attributes its stunning realism and honesty to the 30 raw confessional’s he took from young soldiers and their families:

Brought to life by directors John Retallack and George Mann (Theatre Ad Infinitum), the whole performance is a meticulous and lovingly created construct that gets as close to the action as one would dare, without ever feeling exploitive or voyeuristic.

Heavy on military jargon, the script constantly takes time to educate and inform. Everything from ‘Blue on Blue’ to ‘Pink Mist’ itself are explained, and really do help the audience to fully comprehend the relative normalisation of such savagery in the language of the regulars who use it.

The only major change in the new staging comes in the casting, as former lead Phil Dunster now finds himself starring opposite Hollywood starlets like Kate Mara, rather than on the stage in Bristol. In his stead Krikler brings an edginess that sets apart his take as the main protagonist.

Edwards and Stedman are still stellar as his easily led sidekicks but it is the strong female leads that really steal the show.

Ramm & Killick’s raspingly raw wailing brings home the sheer pain inflicted upon the loved ones caught in the cross fire of conflict, with all the emptiness that that it can wreak, whilst Hamilton is the angry lover who fights with every breath the tragedies that have replaced her boyfriend with a catatonic shell.

To get tickets, or simply to find out more click here.