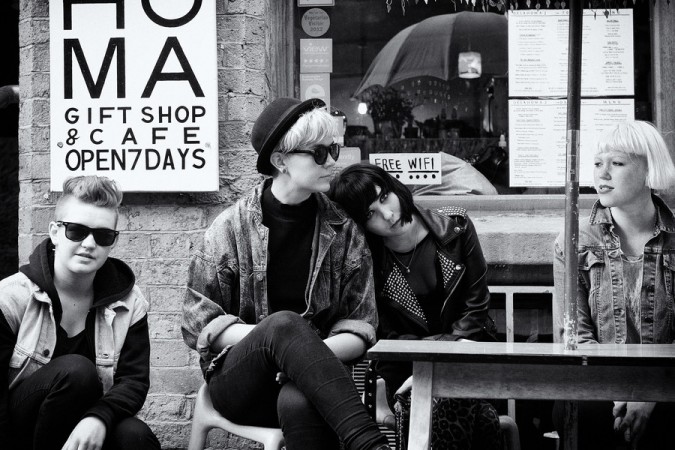 Having been among the standout performers when they previously visited the city for last year’s Dot To Dot Festival, many Bristolian music appreciators may already be familiar with the exciting, uncomplicated live performance clamour of five-piece garage rockers PINS; in fact it’s this live sound that the Manchester group’s first two albums – 2013 debut Girls Like Us and last year’s Wild Nights – haven’t quite been able to capture. This narrative is thus continued with the best moments of tonight’s Thekla appearance highlighting the band’s flair for stirring live performance.

Sluggish opener ‘Molly’, is a spacy arrangement of ragga-tinged guitar riffs and – perhaps indicative of the group’s general unsophistication – its patently obvious drug reference. ‘Young Girls’, one of the best moments of Wild Nights, effectively doubles its catchy guitar hook with three way harmonies and is the first instance of an excited yelp from lead singer Faith Vern.

‘Young Girls’ is the highlight of a first half that fails to capture the usual commotion of a PINS show, a fact that perhaps can be attributed to the band being rendered a little unsatisfied by sounds issues; Vern suggests that her speaker is “feeding back a bit” following ‘Curse These Dreams’ while, as far as five or six songs into the set, guitarist Lois McDonald and bassist Anna Donigan (the latter now sporting a transformative shaved head) are both seen gesturing for their backing vocals to be made louder.

Brand new song ‘Trouble’ unusually subverts a tendency for submissive lyricism by offering up some of the band’s most aggressive lyrics atop of a tame, slow plod and it’s not until ‘Get With Me’ that the set begins to catch fire; Vern and McDonald’s bouncing up and down during the thrashed intro, the reverbed, surfing guitar lines and a forceful build to the final chorus are all signs of a gig having been cranked up a notch.

Though the moniker of “all girl” – a description of the band oft used and now surely cliché in press circles – is one likely to induce a collective rolling of the eyes, feminine identity nonetheless remains at the forefront when Vern dedicates ‘Girls Like Us’ to “all the girls here tonight” and invites them to the front of the stage; featuring more group yelps, a mirroring by the audience of the band’s jumping around on stage and a seguing into Cindi Lauper’s ‘Girls Just Want To Have Fun’, it’s the moment in which the show finally becomes an immersive gig experience.

As the energy of the show increases, so too does the sense of enjoyment emanating from the band; McDonald and keyboardist Kyoko Swan (who, incidentally, seems to be underemployed and often reduced to tambourine duties) sing directly at each other and smile over the same microphone during ‘Dazed By You’; Vern’s applauding of the audience after ‘Waiting For The End’ turns into a hand heart gesture of appreciation while ‘Oh Lord’, far superior here to its recorded version, is kicked off with a group count in and sees much bounding around on stage.

Wasting little time on the faux-tension of the pre-encore, PINS quickly return to the stage to deliver a blistering 90 seconds of punk rock with their cover of The Misfits’ ‘Hybrid Moments’; with Vern off stage and singing among the audience, it’s a clattering, finesse-free racket that highlights what PINS do best. It’s the fitting, and logical, culmination of a gig finding top gear after relatively slow beginnings.