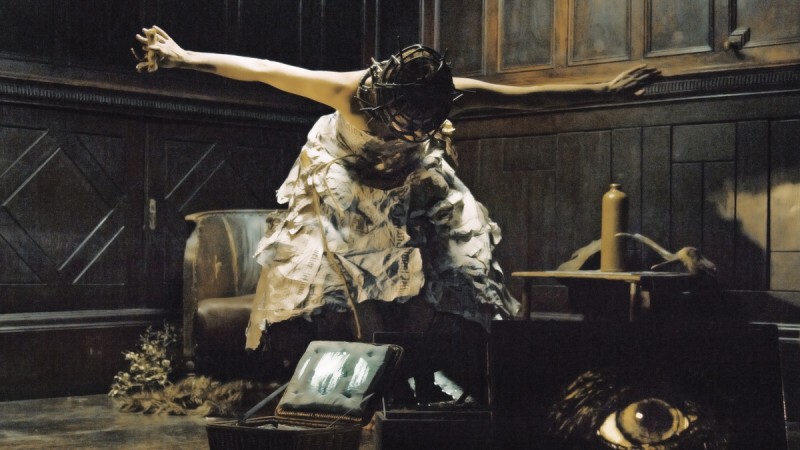 Sometimes words just can’t do art justice. Subjective as it is, it’s virtually impossible to convey the true beauty of a moment in a way that will aptly communicate its true splendour, equally to everyone willing to listen.

Whilst philosophical arguments such as these should really be restricted to the likes of Aristotle or Adam Smith, it is important to give context to the following review given the stupefying brilliance of Raucous’ production The Stick House.

Its ambition, its execution, its passion and soul, it’s variety, this really is as good as theatre gets.

Before arrival there is already a sense of something special in the air, given the unusual location (in the vaults beneath Brunel’s Passenger Shed) and ominous narrative expounded in the pre-show literature.

A promenade performance, Maggie Denning (Executive Director) and Sharon Clark (Creative Designer/writer) concept was always to submerge their audience deep into the very heart of their dark story, and they succeed at every turn.

The little touches throughout provide a real helping hand to  achieve this expertly.

On arrival every audience member is issued with a name tag so that we all resemble World War II evacuee children. Once we are all replete with tags we are ushered into the caverns and almost immediately the show begins to sparkle in the darkness.

Innovative and impressive use of projected images start the show, and instantly we are transported to the bleakest recess of some Dostoyevsky novel.

Conor Murphy’s (previously seen in Bristol with his equally sensational design for Juno & the Paycock) set is simply masterful; with perhaps the centrepiece being the stick house itself. A nest of tumbled chairs, lit just enough to illuminate the main protagonists within, the house is worthy of entry alone.

At every turn the boundaries of what we can expect from a theatre production are being constantly extended, be it in the use of lighting, video projections or even robotics (although the later does feel a step too far perhaps) – Anna Ledwich (Director) cannot be praised highly enough for pulling together this confluence of very varied ideas and forms, and making them work as a cohesive unit.

Although a gothic tale that reeks of rust and decay, the performance has a real sense of modernity to it given the 21st century touches and although a relatively predictable narrative, the story itself almost feels ancillary to the expression of the passion.

Lucy Mae Rothwell provides much of this passion as Marietta, (indeed when the red mist descends is when Rothwell really shines) and she is ably assisted by Gareth David-Lloyd as Woodcutter. But the real star of this theatrical cave is Christopher Elson as the unnerving Hobbledhoy, which he delivers with so much oddness that he feels part Mel Brooks Igor from ‘Dracula’ and part Robin Williams.

Memorable beyond measure, Raucous’ The Stick House combines so many good ideas together at one time that it almost seems selfish.